The Path of Conor McGregor: Rising Through the Ranks 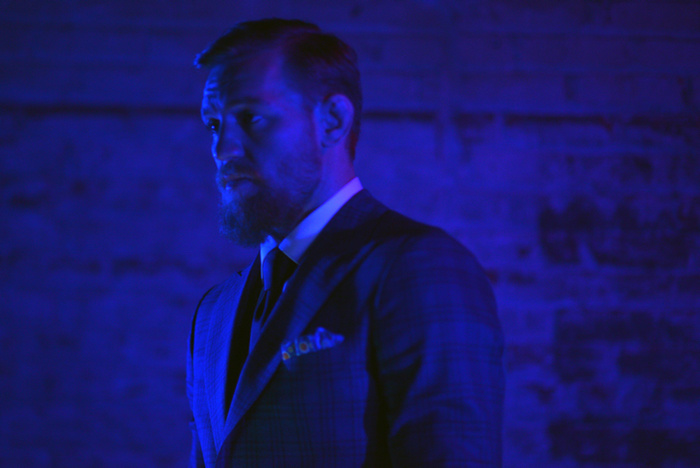 After Conor McGregor had taken both Cage Warriors' featherweight and lightweight titles, the UFC decided to sign him to a contract. In his first bout McGregor met Marcus Brimage. With a 6-1 record and a couple of wins in the UFC under his belt, Brimage seemed a suitable first step for McGregor. After some early attempts at the skipping back left straight which had melted Ivan Buchinger, McGregor recognized that though Brimage was suitably aggressive, punching down on him was making it difficult to land the counter left straight. So McGregor went to the uppercut.

Brimgage's crouched posture and his aggression made him the perfect mark for the uppercut. Running onto it several times in a row, he soon collapsed to the mat and McGregor had his first UFC victory. As it took place on the undercard of Ilir Latifi versus Gegard Mousasi, and Mousasi's UFC debut had none of the dazzle everyone had hoped for, McGregor's victory became the talk of the media after the event.

McGregor's next opponent was Max Holloway, a young prospect from Hawaii. He hadn't done much, but those who had seen him fight knew he was something to watch. In his most recent bout he had dropped a controversial split decision to the grinding Denis Bermudez, boxing the wrestler up beautifully the entire time. He wasn't much of a finisher, but he was technically sharp, rangey, and full of potential. A match against another quality striker in McGregor had those who followed the featherweight division excited from the moment it was announced.

Against the most competent striker he had met to date, McGregor was a marvel. This was the first bout in which the McGregor we recognize today was present. Kicking with great frequency, McGregor utilized a gliding low line side kick to irritate Holloway and deny him the ability to dart into boxing range with his excellent straight blows.

A technique which Bruce Lee considered to be the answer to all problems (seriously, read the self defence volume of the famous Bruce Lee's Method series), the low line side kick from an open guard (southpaw vs orthodox) utilizes the longest weapon against the nearest target. For maintaining range it is invaluable and you will have seen Jon Jones, Anderson Silva and McGregor have incredible success when utilizing it.

These gliding low line side kicks soon turned into jumping switch kicks as McGregor picked up the lead leg as if to side kick, before turning it out to open his hips and jump into a round kick with his left leg.

While they looked extravagant and ineffectual, landing on the arm most of the time, they accomplished the goal of closing the distance and allowing McGregor to land a short left straight or two.

Holloway's great problem throughout his career has been his ability to kickbox technically with the best of them, but his being easily over excited or frustrated. One round he'll box circles around his opponent, and the next round he'll be flying past his opponent with jumping knees on the off-chance that he can pick up a highlight reel knockout. And frustrate Holloway is exactly what McGregor did. There was no highlight reel knockout, there were few meaningful connections, but when the two came together it was McGregor's choice, not Holloway's.

The bout was not entirely contested on the feet, however, as McGregor took Holloway down for much of the last round. Reportedly McGregor damaged his knee in the second round and made an abrupt shift in gameplan. McGregor's knee would become something of a theme in the narrative of his fight career, as do so many of the repeated injuries which plague the gruelling world of MMA.

Looking back, McGregor versus Holloway was far more significant than it seemed at the time. While McGregor has notably been on the up ever since, it proved a watershed moment for Holloway too. Previously picking up close decisions, Holloway has gone undefeated in the seven fights since he met McGregor, over the best competition of his career, and has finished all but one of them. He's looked measured, but aggressive, and whenever a spanner has been thrown into the mechanisms of his gameplan, he has never looked as confused and has simply gotten back to work.  The inevitable rematch between McGregor and Holloway at some point in the future is something to look forward to no matter who you support.

By now the questions were rising about what McGregor would do against a competent grappler and a rivalry with Cole Miller was brewing. The fight was signed for a UFC card in Dublin and McGregor was, for the first time, a UFC headliner. Miller was forced to pull out of the fight by a thumb injury and was replaced by the wild brawler, Diego Brandao.

With a crowd consisting entirely of his countrymen, McGregor set to work on Brandao immediately. Opening with a jumping switch kick, followed by a wheel kick, McGregor was already back into position as Brandao attempted to fire back. McGregor darted back and landed his favourite counter left straight, stumbling the Brazilian momentarily.

After reversing a takedown attempt and winding up on top of Brandao, McGregor fought off leg lock attempts and hammered down a few good blows. When the two returned to the feet, McGregor sunk in a few of his favourite snap kicks to the midriff and Brandao—who is prone to sprinting at his opponents at the bell of almost every fight—was already wilting. Brandao began to circle in an attempt to get away from McGregor's left hand, and walked straight into the wheel kick which McGregor had been developing to deal with this common occurrence.

The bout came to an end with McGregor pressing Brandao along the fence and following him along it with a long left hand.

Brandao, at 18-9, was by no means a top tier featherweight, but he was always a solid grappler and that had been touted as McGregor's weakness since his early submission losses. He'd still faced no one with any great wrestling ability, but his next match was signed against another ascending featherweight, Dustin Poirier. The heavy handed Poirier was considered one of the most dangerous and accomplished opponents McGregor had met, and the winner of that bout would be catapulted into title contention.

In the space of three fights McGregor had gone from being a preliminary fighter on a mediocre card to a headliner at an event built around him. You would struggle to think of a fighter who had anywhere near the same level of success in such a short time. But it was McGregor's next bout which would see McGregor fever hit its greatest heights, though that is for another walk on the Path of McGregor.

The Path of Conor McGregor: Birth of The Notorious

The Path of José Aldo: Seizing the Crown

The Path of José Aldo: Fed to the Lions