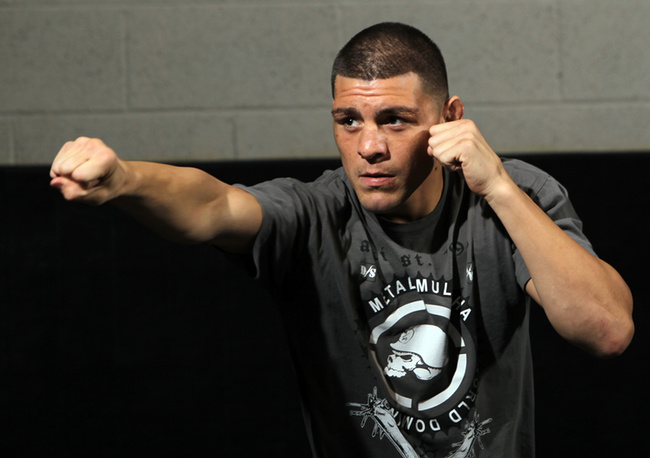 In 2007 there wasn't a lightweight on the planet as dangerous or as dominant as Japan's Takanori Gomi. Over the course of three years The Fireball Kid had taken on the best in the division and basically cleaned out the top ten.

Beginning his mixed martial arts career as a product of Kiguchi's Combat Wrestling, Gomi cut his teeth as a ground and pounder. He could hold down and batter the best guys on the Japanese circuit, and won a Shooto lightweight title by crushing the legendary Rumina Sato with strikes from the guard. But after going 14-0, Gomi met a pair of challenges that he wasn't prepared for—Joachim Hansen and B.J. Penn. Both men showed how helpless Gomi looked when he wasn't on top, raining punches on his own terms.

After licking his wounds, Gomi joined the PRIDE organization. Following a couple of fights which he won through his usual ground and pound tactics, Gomi began to impress with his notably improved boxing and knee strikes on the feet. What really surprised though was Gomi's power. It was tremendous. The men he hit clean were rocked to their boots. It was numbing, starching power—the kind which took away a fighter's legs or turned his lights out—and that just isn't commonplace in lightweights.

Takanori Gomi steam-rolled his way back to the top of the division, winning the PRIDE Lightweight Grand Prix in which he battered two of the top lightweights in the world in one night. When his power wasn't enough on its own, it didn't matter because he drove a ferocious pace and used body punches to an extent which we hadn't seen at all to that point in mixed martial arts.

Gomi (left) uses the seldom seen cross hand trap. His left hand reaches all the way across his body and rips Pulver's left away. Gomi throws his right hand through the gap, Pulver ducks his head, and Gomi connects a left uppercut for the KO.

One of the more peculiar habits of PRIDE was the company's use of non-title matches, placing the champion in against an almost random opponent without the title on the line. Sometimes it was an obvious mismatch, such as when Fedor Emelianenko crushed the morbidly obese Zuluzinho, but other times it just seemed to be a strange way of putting on an interesting fight. At PRIDE 33 in Las Vegas, one of the Japanese promotion's few shows in the United States, PRIDE brass decided that the best guy around to give Gomi a good fight was almost-local lad, Nick Diaz.

Diaz was hardly an unknown, in fact he was a favorite among the American fan base even then—having come from a TKO win over Gleison Tibau in the UFC three months earlier. Diaz struggled with the strong, active wrestlers though, having been overwhelmed by the young Diego Sanchez and dirty boxed by the dynamo that was Sean Sherk. A natural welterweight (170lbs), he didn't struggle much to get down to the PRIDE lightweight limit (160lbs), and had pretty much never been in a boring fight. It was a brilliant fight for PRIDE's lightweight king to impress the U.S.

Gomi surprised some as he came out and immediately took down the Cesar Gracie black belt, and looked to ground and pound. Diaz worked his way to turtle and looked for that Sakuraba kimura or a chance to stand up, as he has throughout his career, but after holding the kimura grip for too long and getting flipped and slammed by Gomi, Diaz struggled back to guard.

Diaz quickly tied Gomi up in closed guard and held on for dear life, avoiding the punishment which had stopped Rumina Sato and so many others. He was damned if this was going to be another Diego Sanchez fight. Soon, the two were back on the feet and Gomi was looking for the kill.

Gomi swung wide, and dropped Diaz back to the floor with blows which seemingly lifted the American off his feet. Diaz would later describe these as “fucking hadouken punches”. This was followed by the usual throwing out of arms which The Fireball Kid was so famous for.

There are so many criticism's that can be leveled at Takanori Gomi. The most significant is that he had a tendency to let his ego run away with him. The Takanori Gomi of the lightweight grand prix—with the cardio and good sense to keep working body punches and knees and pile up the damage over time, and who outpaced Kawajiri and Azeredo in the same night—could go even with any lightweight to date. The problem was that Gomi, like almost any great puncher, started to believe that it would be business as usual to put opponents away early, not just a happy bonus.

Diaz was in dire straits, he had to survive and avoid those brain rattling broad sides. Every punch Gomi threw had the potential to end the fight. But Diaz got up again. Suddenly there was a change in the dynamic of the fight.

Where Gomi's huge swings had been flying through Diaz's half power punches, now the swings were falling wide, knocked off course each time Diaz tapped Gomi's head. The volume and precision of Diaz was both tiring Gomi, and rattling his brain. More and more of Gomi's blows fell against Diaz's shoulders or forearms, or missed altogether.

Suddenly it was all Diaz. He was up in Gomi's face and wasn't giving him a moment's rest. Gomi was gasping for air and his hands were dangling by his sides. The first round came to an end as Gomi literally stumbled backwards onto the ropes with Diaz pursuing him with his great right jab. The crowd erupted as the bell ended the first stanza and saved Gomi, while Diaz raised his hands, almost as astonished as everyone else that he was doing this to the best fighter in the world.

The second round picked up where the first left off, as Diaz got the better of exchanges, but with a short break, Gomi could at least lift his arms when he returned to the center of the ring. Gomi timed Diaz ducking in, just as he had with Ralph Gracie, and connected an intercepting knee which lacerated Diaz's face. A ticking clock was on the fight all of a sudden as each of Gomi's few punches that connected did so with the force to tear Diaz's skin open further.

Gomi was still exhausted, and still coming up on the losing end of exchanges. As he backed up under Diaz's constant pressure he repeatedly looked at the referee, attempting to sell the severity of Diaz's cut. The referee was having none of it, he knew Gomi was looking for a way out.

In desperation Takanori Gomi dived in on a takedown, knowing that Diaz had been unable to stop him previously. Gomi spiralled around to complete the tackle but fell into Diaz's guard with his arms locked around Diaz. A hand on the mat is a dangerous thing in grappling, because it provides control and sections off that limb for attack. Where normally that attack would be an overhook triangle or an omoplata, Diaz did something unusual.

The Pride of Stockton hugged his left knee and pulled his left foot up and over Gomi's right shoulder. Diaz laced his left foot in underneath Gomi's windpipe then snapped Gomi's head down and placed his right leg across the back of it, securing the gogoplata. Aside from Shinya Aoki's defeat of Joachim Hansen, this technique was practically unheard of in mixed martial arts, and Diaz had seemingly pulled it out of thin air against one of the finest fighters to ever grace the sport of mixed martial arts.

The glory was short-lived however as Diaz, in what was to become standard form, failed the post fight drug test due to his keenness for marijuana. The fight was called a no-contest, but no one really considered it that. It was a spectacular coming out party for Diaz and remains one of his greatest performances to date. The fight was considered 2007's fight of the year, and while Gomi began a steady decline following this bout, Diaz's stock rapidly rose.

Regardless of the overturned result Diaz gained a great deal from the bout—a reputation for both world class skills and excitement—but nothing stayed with him so much as the scar tissue which adorns his face. Recognizing just how hard Gomi had been hitting Diaz before Diaz could turn the momentum, one realizes that no matter how much Diaz professes to dislike fighting, he has been built for it. The heart and defiance to take such punishment and push through it just to throw back is not easy to come by.

The great twist of this tale is that deep cuts which Gomi opened in Diaz's skin were to come back and cost Diaz one of the most important fights of his career just a few months later, but that is a story for the next chapter of The Path of Diaz.

Come back tomorrow for the second step in The Path of Silva.

Check out the first Path of Anderson Silva: