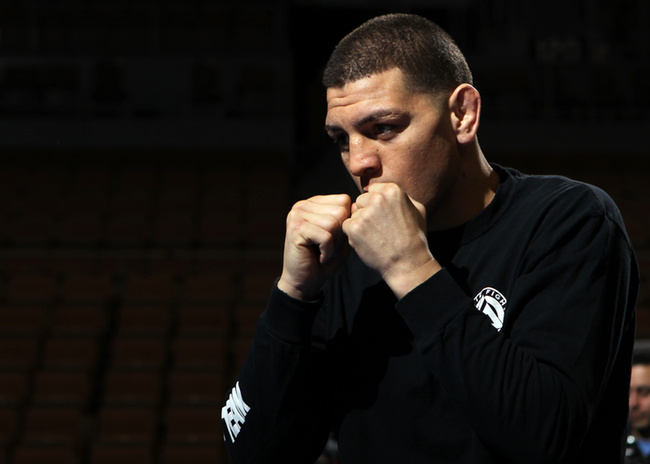 In the match up of Anderson Silva versus Nick Diaz we have two fighters whose most ardent fans still dispute their losses at every opportunity. MMA is full of “bad nights” and “lucky punches”, but to truly understand and enjoy the sport better, we must appreciate that fighters almost always lose for real, tangible reasons.

When K.J. Noons stepped into the ring with Nick Diaz, it seemed like an atrocious piece of matchmaking. Noons was 5-2, having been brutally knocked out in just two fights earlier by Charles 'Krazy Horse' Bennett of all people. Diaz, meanwhile, was a veteran of the UFC, had just stopped PRIDE's 160lbs champion, and had three times as many fights as Noons. It seemed like a terribly sloppy way of getting the inaugural EliteXC 160lbs belt into Nick Diaz's hands.

Noons is a peculiar fighter because of his strong pedigree in boxing and kickboxing, and his active head movement, weaving low and coming up with booming hooks. He's an even more curious fighter for the way he has somehow, in spite of this movement, managed to become a magnet for punches. Spare perhaps the Pancrase journeyman, Yoshiki Takahashi, I have not seen anyone with such active head movement get hit so often.

When Noons stepped in with Diaz, most expected the more rounded, experienced fighter to clean up and take the belt they'd made for him. Not so.

Stepping on the Sword

The phrase “styles make fights” has become a cliché. It's one of those things which means less every time you say it. But at the root of this mantra is a truth that governs all combat sports. Fighters have favourite methods, no-one can do it all, and every fighter's favourite method will struggle against a few particular counter methods. A world champion could clear out the top ten of his division and struggle with some unknown jobber from a regional show just because of the style match up between the two.

Nick Diaz's style is built around his right hand, which is a little unusual for a southpaw. Diaz, being right handed, carries his strong hand forward and consequently all of his best punches come from his lead hand. Robbie Lawler, Frank Shamrock, Paul Daley, all decked with the short, slippery right. The shortcoming of this is that if you have a little bit of know how, and the discipline to stick to the gameplan, taking away a southpaw's lead hand is very easy—you just have to tie up your lead hand to do it.

When a southpaw and orthodox fighter meet, the lead hands clash. The hand fight becomes important. If neither hand fights, the jab is still a dangerous weapon for either. But if one chooses to start checking the other's hand, the other one better start handfighting back, or he will end up on the arse end of the better punches all night.

And that is exactly what Noons did. From the get go, his lead hand was on or around Diaz's at all times, denying the jab. There was none of that triple jabbing to the ropes / fence that Diaz had done aganinst Gomi. His best and most dexterous weapon was gone. The downside of leading with your strong hand is that your rear hand is noticeably slower and more cumbersome—as was famously the case with Marvin Hagler. Noons denied Diaz his lead hand and beckoned the rear hand in. When Diaz saw the chance to throw his left straight, Noons would slip past it and crack him in his left ribs before Diaz could withdraw his arm. It was magnificent.

Reportedly, Diaz had undergone a particularly harsh weight cut in preparing for this fight. That may be true, it may not, but the body shots clearly hurt him as he rushed to take Noons down and was stuffed repeatedly. Certainly, the psychology of fighting says that a fighter will reveal the methods he finds most daunting on defence within his own offence. Diaz is the king of the body punch in mixed martial arts, it stands to reason he, at some point, decided they were extremely unpleasant to take and decided to put that evil on someone else.

As Diaz shot in near the fence, Noons timed a knee strike and opened up the scar tissue around Diaz's face. Those same cuts which Takanori Gomi's tremendous power had opened in Diaz's face just a few months earlier were coming back to haunt him. This time, though, Diaz was able to drag Noons to the ground, where he immediately began to pass the guard.

As Diaz effortlessly cut through Noons half guard, Noons surprised again. A quick turn to his knees to give up his back, and a rapid return to the other direction left Diaz on the mat and Noons standing over him.

As the round progressed, Noons built up from the right hook to the body. Now he was looking to land a pretty unusual punch. Some call it the overhand left, others call it the Cuban hook, a Russian hook, and so on. Whatever it is, it's an unexpected way to crack someone upside the head, and no-one can argue against that quality.

In the 1970s and 80s when the USSR and the USA were fighting an arms race in the boxing ring, the US team focused—generally but not exclusively, of course—on lateral movement and straight hitting, where the USSR team often had a preference for fencing-like movement on a line and perfect distancing, with looped power blows playing an important role. It's from here that we get the idea of “Russian hooks”, or long hooks. You don't have to be Russian to do them, but it's pretty common that you can trace the guys who frequently go to them back to former USSR based coaches. Really it is a lead hook that comes in on a downward trajectory, as an overhand right hook would.

Here, for instance, is Gennady Golovkin stopping Marco Antonio Rubio with a downward arcing hook that connects on the top of the head.

Midway through the first round, Noons had Diaz's elbow dropping tight to his side at any whiff of a punch. Noons only threw two right straights in the fight, compared to dozens right hooks to the body, but they clearly stunned Diaz.

The round ended with the two men fighting over a takedown on the fence, and the fighters returned to their corners. It was here that the doctor, who had been called in once already, deemed Diaz's cuts unsuitable to continue. The crowd didn't know what to think, Noons embraced his corner as he, a 5-2 fighter, had defeated an elite veteran to win a world title.

Diaz had been soundly drubbed through that first round. He looked helpless without his lead hand, and he took punches that winded him so badly that he spent extended periods butt scooting and attempting to pull Noons into his guard.

But crucially, Diaz never stopped moving forward, and by the end of the round, he was connecting punches and actually getting Noons to the fence. It was as if a five act play had been called off at the end of the first act, with the theatre staff ushering you out and telling you “yeah I'm pretty sure Macbeth gets away with it”. No-one knew quite what to make of it.

Fighting has a funny way of punishing a winner, though. K. J. Noons never recaptured the form of that night. In 2008, smoked Yves Edwards in forty eight seconds to defend his title, then he disappeared for a short stint in boxing that didn't go anywhere. When he returned to the cage in 2010, he looked slower, with longer 'playboy' hair which he repeatedly had to remove from his eyes and making more hittable than ever, and where his grappling had been a pleasant surprise before, it now seemed to be lacking for a veteran. He was the perfect example of the old Japanese proverb about being unable to chase two rabbits at the same time.

This is the Path of Diaz though, and if there's one thing we can say about our protagonist (loveable antihero?), it's that he doesn't often learn from his mistakes. He and his brother have experienced public shortcomings in checking kicks and in cutting off the cage, and they have never done anything to alleviate these issues. But over Noons, Diaz seemed driven to better himself. This wasn't one where he could convince himself that he should have won the fight—yes it was stopped early, but he wasn't just getting out maneuvered, he was getting out punched at every turn.

When Nick Diaz and K.J. Noons met again at welterweight, Diaz showed something completely new. Rather than risking Noons taking away his lead right, he switched stances routinely, keeping his right in close and ready to throw. He used every centimeter of his four-inch reach advantage, and instead of it was Noons who left round one with blood on his face.

Diaz fought orthodox throughout the fight, and even introduced kicks, knees, and successfully hidden takedowns into the game. Most had Noons down to lose on his form in recent bouts up to the fight, but for Diaz, it was one of the most thoughtful and complete performances of his career. The bout was a back and forth brawl but remained one of the more technical boxing showings in MMA history. Definitely worth watching if you haven't seen it in a while.

Noons versus Diaz II came amid the greatest streak of performances in Diaz's career—those that led him back into the UFC and into a title eliminator. But Noon's first performance laid the groundwork for one of the more disciplined strikers in the welterweight division to take that title shot away from Diaz. That, however, is a story for the next installment of The Path of Diaz.

Come back tomorrow for the next step in the Path of Silva, where the cracks will begin to show in The Spider's A-game.

Check out more of this series: