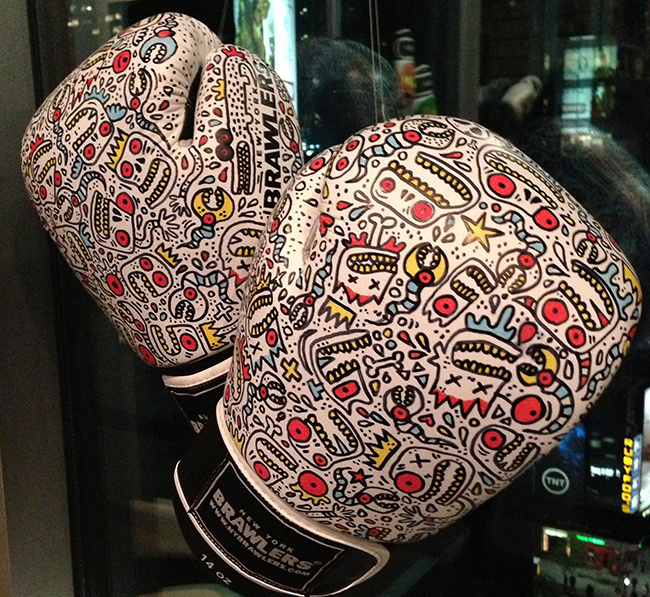 Considering the colorful personalities that many fighters have, it’s a surprise that a good deal of fight gear still lacks character. Sure, if you look hard enough, you may find a pair of gloves with zebra stripes on them or the name of the country the fighter hails from, but most lack a certain spirit. Last summer, Pantelis “Pun” Nikolaides noticed this self-expression void in MMA/boxing products and responded by founding Fight the City, a company that collaborates with artists and designers to create unique fight gear. His team’s latest venture was “Fight for What’s Right,” a showcase of custom boxing gloves hand-painted by artists such as Kiyoshi Nakazawa, Cope 2, and Borbay.

“We gave them the gloves and told them to just have fun,” Nikolaides said. “We’re trying to do something new and collaborative that’s going to change an industry. We want to flip it on its head.”

The event, which took place over two nights last week in Los Angeles and New York City, was followed by an auction that began on Monday, May 13, and will be live on eBay until May 20. Most of the gloves start at $100-300, and part of the event’s proceeds will go to the Hoods to Woods Foundation, which takes inner-city kids on outdoor trips to learn camping, rock climbing, hiking, and snowboarding.

Nikolaides, an Ohio native, originally moved to New York to earn his BFA in graphic design from the School of Visual Arts. After graduating, he began working as a motion graphic artist for television networks but quickly became disillusioned.

“I’ve always had a very big passion for art, but when I got into the art world, I realized how corporate everything was,” Nikolaides said. “So I went back to my first passion, which is martial arts. That’s my art—that’s my voice. Of course, with Fight the City, there’s a brand and I’m manufacturing something, but it’s an expression of my self. It’s an extension of who I am,”

After striking out on his own, Nikolaides sought out partners. He joined forces with Steven “Mylos” Miller, now the CMO/co-owner of Fight the City, and Kevin Lilis, CEO of Victory Combat Sports. Using what they describe as a barter system, Nikolaides and Miller fleshed out an idea for an event that would combine two seemingly incompatible elements: fighting and painting. Not that Nikolaides doesn’t see any contradictions. “Art is art,” he says. “It doesn’t matter if it’s with a pen or with your knee, or elbow, or fist. Yes, it’s a sport, it’s fighting and it’s violent, but there’s an art to it.”

Justin Carty, an artist who worked on a pair of gloves and an oil painting for the show, was surprised when Nikolaides asked him to participate but immediately took to the idea.

“Surprisingly, my style of painting, with the energy of the brush strokes, adds a movement that works great with fighting and the choreography of it,” Carty says. “I’m not interested in painting something where you’re like, ‘Oh, yes, that looks like Mohammad Ali’s nose!’ I’m interested in capturing the essence or the spirit of it.”

Carty works with bright, evocative colors and alternates wide and narrow, angular brush strokes, creating the sense that lines are exploding from some central point bursting with light. Though the subject is still, the canvas feels vibrant. It's an approach, Carty says, that reflects his interest in fighting:

“I love that in a fight, there are no excuses, and that whatever happens, the best man is walking out of there. There are no frills. I grew up in New York in the 80s and 90s, so I really understood the fight, the struggle. It was a different city. Every time you went to school, you could get into some crazy situations,”

Other artists featured in the NYC show seemed to have no trouble expressing themselves on an entirely new, unusual “canvas.” A few chose to completely alter the traditional structure of the glove. One viewer described a spiked, entirely black piece by Jay222 as “Game of Thrones-esque.” Another piece, by John Spanky Stokes, had a furry body with cherry red innards hanging behind it, making it look like a character from a R-rated version of Where the Wild Things Are. Overall, these are not the gloves you would bring to training. Consider them instead objects for display or as the Oscar dresses of the fighting world—meant to be either admired regularly or slammed into faces on only the most special occasions.