The Power of the Punch Not Thrown 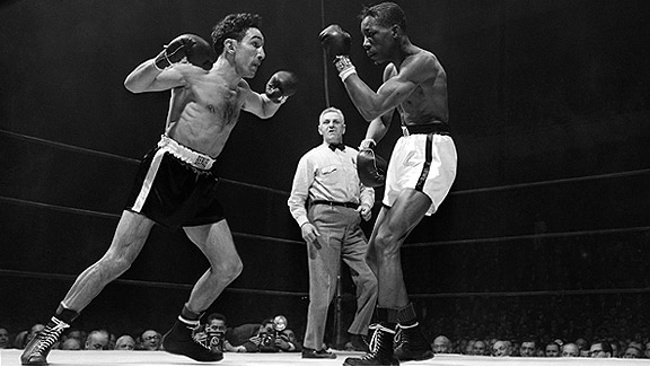 As spectators, there is nothing so beautiful as a good tear up. Two men battling to impose their method on the opponent, but meeting with resistance every step of the way. Yet a fight should be the absolute antithesis of what a professional fighter wants. A fighter at the peak of his game wants to be hunting; moving around his quarry, deciding the best point at which to strike and never allowing it a fair chance.

I can probably count on my hands the number of times its happened in the last three years, but when I see an elite fighter dismantle another highly ranked competitor without taking anything meaningful in return, I am reminded of two men. The first is Willie Pep, the great Will o' the Wisp. Legend has it that Pep once won a round without throwing a punch. Enough film of Pep survives that we can tell he was something special. Constantly turning his opponents and leaping in as they pivoted around one foot, in no position to hit back.

After Pep had landed he'd immediately escape the capture of the infight, darting out on a new angle as his opponent swung wild through his wake. But with Pep it was as much kidology as it was a fight. If he thought they were catching on to what he was doing, he'd stop doing it for a while. Pep tied opponents in knots as he boxed perfectly—getting in and out on angles—every time except when they seemed to be ready for it.  In his famous no-punch round, Pep was able to convince the judges to score the stanza for him by utilizing his feints so effectively that the opponent's flinches and timidity convinced the judges he was taking a shellacking.

The second thought which comes to mind is a phrase which has impacted my thinking deeply in pugilistic matters. 'The Ghost with the Hammer in his Hand'. That is what some sports writer deemed it suitable to call Jimmy Wilde, one of the most prolific knockout artists in boxing history and the world's first flyweight champion. Little Wilde footage exists, and he seems considerably cruder than Pep, who was as slick as any modern fighter, but that phrase has stuck with me. Spectral evasiveness combined with dynamite hitting power when the time to hit comes. Being almost intangible until everything is perfect, and then allowing the opponent to run onto a brick wall. That is the epitome of fighting perfection.

The story of Willie Pep and the punchless round has been repeated to the point that it goes largely unquestioned—though attempts to locate footage of the round or an account of it have proven fruitless. Supposedly it was the third round against Jackie Graves, though accounts of that have it being the most even and frantic round of the bout. The punchless round seems to be ghostlike in itself, being entirely a work of fiction purported by Pep's supporters and later by journalists who enjoyed the kung fu like mystery and romance of it.

No, Willie Pep didn't feint his way to winning a round. He did it to win thousands. As a professional, Pep boxed almost two thousand rounds, and he won the majority of them. His style never changed, never faltered, it was always built around one principal and it is one which has outlived him in the form of myths like the punchless round. Pep's style was about blurring the line between lies and truths, fictional blows and real ones.

The power of the feint is so misunderstood and undervalued in combat sports that Pep would probably have a laughing fit watching many of the fights on any given weekend. The rudimentary application of the feint is obvious—fake one way and go another.

Roy Jones Jr. here demonstrates the classic hook off of the jab. The jab doesn't go to extension but draws the opponent's right hand in to parry—the classic defence. This exposes the opponent's jawline on the right side. Jones, because he hasn't thrown to extension, is still in position to leap in and throw the left hook.

Here Andy Hug brings his rear foot up as if to throw the powerful rear leg kick he has been utilizing all bout, but instead punches his opponent in the face.

And here, the great Buakaw feints a rear leg low kick, bringing his opponent onto one leg and rooting him to the floor, before sinking in and body shot on an immobile target.

The feint's value is as an attack. It is not a physical attack on the opponent, but as an attack on his position, his wits, and on his confidence. Human reaction times are around a quarter of a second on average, higher in athletes. This means that for all intents and purposes the difference between a feinted jab (from appropriate range) and a real one is whether there is an impact—be it on the glove or on the face—or if the opponent recovers from his flinch reflecting on the words of Marvin Martian—“where's the kaboom?”. The more fatigued a fighter becomes, the more he goes to what has been trained into him or to his instincts, and the more predictably he starts reaching after feints.

But that's elementary stuff. Anyone can fake one way and go another. The real value of the feint can only be appreciated against competent, dangerous opponents. The counter puncher is the one everyone is scared of. Every time you step in against a counter puncher you are offering him a chance to apply his craft. The feint is the method for the man on the lead to take back the initiative. When you take a powerful counter puncher and start feinting at him, he starts swinging at air. He can keep it up, giving himself a hernia as he keeps missing swings and exhausting himself, or he can lighten his finger on the trigger. And that's when that 0.25 seconds is going to kill him.

The legitimate jabs start coming in and the hesitation in the counter puncher equates to paralysis. The perfect examples are T. J. Dillashaw's drubbings of Renan Barao after making the bantamweight great swing clumsily at air to the point of embarassment, and Stipe Miocic's beating of Mark Hunt. When faced with the problem of Mark Hunt's counter left hook, Miocic let him throw it at air a couple of times, reconsider it, and then Miocic went to work with jabs and takedowns.

Furthermore, the counter puncher knows more than anyone that punching second is best because there's little chance of a return if you miss. If he's feinted into swinging at the air, he's wide open to be put on the end of the counter. Here's Eddie Wineland making the aforementioned Renan Barao look daft.

For years, the simple threat of counter punching had MMA fighters paralyzed. Anderson Silva did nothing but counter strike and ruled a division for years as opponents came in clueless. If you can't punch at him without getting hit what on earth do you do? So, so few fighters will make the commitment to constant, convincing feints and to blur the line between the real blows and the fictitious ones.

Fighting as a whole has come a long way since Willie Pep was dancing his art across the ring canvas, but the truth is that the most valuable punch against the truly dangerous, educated counter fighter is still the punch not thrown.