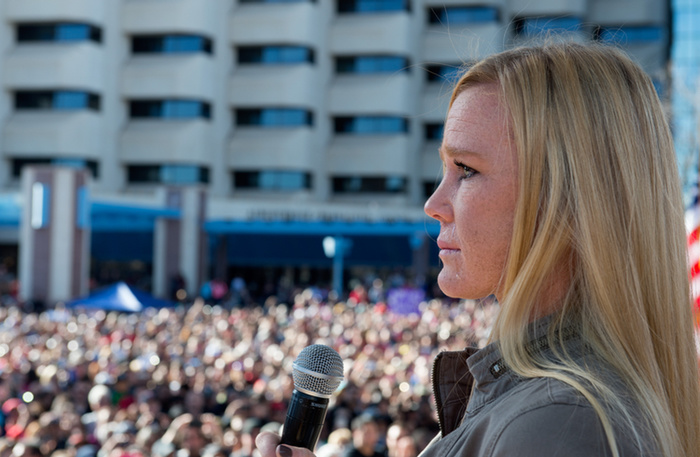 Holly Holm has been the UFC Women’s Bantamweight Champion for a little over a hundred days now, and she’s spent almost every single one of them living in the shadow of the woman who came before her—the woman who quite literally fell at her feet. While this is understandable to a certain extent—Ronda Rousey remains as fascinating if not entirely admirable in defeat as she was in victory—but it’s also unfortunate, and not because a reigning champ deserves to be treated as such. While the rest of the world has both intentionally and unintentionally tried to make her the Jan Brady to Rousey’s Marcia, Holm has quietly gone about her business with a stunning level of tact, grace, self-possession, and intelligence. In other words, in the face of one of the most undervalued reigns in UFC history, she has demonstrated some of the most solid championship material we’ve seen in a very long time.

In a sense, Holm’s entire UFC career has been a testament to her ability to shine when she’s somewhat under the radar. While she was initially received with a decent amount of fanfare when she first signed with the promotion, the enthusiasm surrounding her began to wane in the face of her split decision against Raquel Pennington last February and her unanimous one against Marion Reneau last July. Neither fight was a barnburner, and the borderline genius of the slow-burning game plan behind them only revealed themselves after it paid off at UFC 193, which left Holm quickly written off by most as another over-hyped prospect who was only being sold a legitimate threat to the seemingly undefeatable Rousey. But Holm, in her typical quiet but deadly fashion, took it all in stride, refusing to underestimate her opponents or herself as she worked toward the belt.

When she won it, the overall narrative of her incredible victory quickly became more about Rousey’s defeat than her victory, but still she didn’t flinch. She handled herself well under the spotlight, tripping only when it came time to talk to Beyoncé (which she then relayed to the world with charming self-deprecation). And when things got both serious and sensational when Ronda Rousey began making her first public appearances after her soul and brain-shaking loss? Holm got even better. 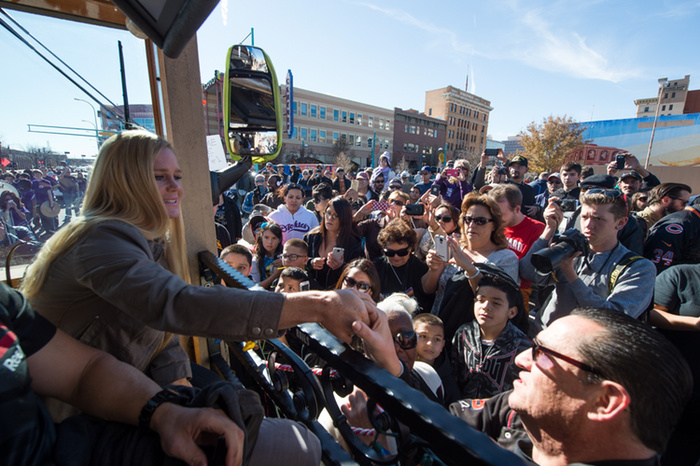 Do you know how it feels to be a martial arts nerd watching fights with uninitiated people and desperately wanting and trying to explain the subtle and intricate nuances of what is going on in the ring or cage? That’s how I felt as someone with 34 years of experience with female socialization and conditioning and 15 years of being a woman in the media when I was watching Holly Holm conduct herself in the wake of Rousey’s appearance on Ellen. Given the innumerable ways in which women or people who are read as women are conditioned and socialized from birth to be nice and placating, given the way that women are consistently pitted against each other and are then admonished for being either catty or weak depending on how they respond, given the intense care with which women must conduct themselves in male-dominated spaces (and the specific way in which WMMA stars have had to watch themselves in a post-Rousey backlash world), the Preacher’s Daughter has been nothing short of a social and PR red belt lately.

Take a look at what Holm said to Sherdog in response to Rousey’s revelations about having suicidal thoughts after losing to her:

“There’s a lot of things around that. When I heard that she said that, for me it’s one of those things it’s like, ‘How do I respond to that? I don’t want to say I’m sorry because I think on a competitive level for me, if somebody was to say they’re sorry after [beating me], it’s like, ‘No, I’m a competitor.’ I’m not a charity case. I feel like that’s something the best thing is for me not to say anything at all. I don’t want to say that I’m glad that she felt that way and I don’t want to say, ‘Oh I’m so sorry.’ It’s something I think that you have to dig through on your own. In the long run, she’ll be stronger mentally from it.”

In the course of a few lines, she manages to acknowledge how messed up her position in this situation is, express more empathy for Rousey than almost anyone else in MMA has, and hold her own.

Despite Fox New’s efforts to stir things up between the two women, like one of the villains in Lush’s “Ladykillers,” with the not-technically-inaccurate-but-wildly misleading headline “Holly Holm has no pity for Ronda Rousey’s suicidal thoughts,” Holm navigated similarly thoughtful and nuanced waters with this reflection:

“I’m probably the worst person to ask for advice on that,” she said when asked about Rousey’s revelation. “I definitively don’t want to sit here and feel sorry, because I know for me, I have a competitive mind, and I’m confident Ronda is the same, that you don’t really want sympathy from the one that like created this. That almost makes it even more frustrating. I do hope that obviously she never really entertains that. I think the best thing really, like I said, my advice is probably [not that good], I’ve never been there before mentally, but I think it’s always a good thing to surround yourself with people you trust and people that can support you and care about you.”

She’s displaying similarly complex poise now that she’s preparing to face Miesha Tate at UFC 196 this weekend. Once again, she’s faced with a situation that caused great suffering and frustration for a fellow competitor through no unfair fault of her own—in this case, the fact that Tate was originally promised the title shot that went to her at UFC 193, and the subsequent impact that had on Tate’s career—and she’s responded in a way that diminishes neither woman’s serious concerns or her own accomplishments.

After redirecting an interview away from questions about Rousey (“How much time are we going to spend on that?” she sighed. “I have Miesha in front of me.”), she told Rolling Stone: "I expect a really tough fight. I'm going to get the best Miesha Tate there is. Having that chance at the title taken away from her, I think this is really a motivation for her. She could change everything for her career and her life by taking this belt away. I'm really aware of that. Just because Ronda beat her doesn't mean that I can beat her. I have to expect her hardest game."

She’s acknowledged her past opponent, and pointedly forced the media to give her next opponent as much respect and attention as she’d made it perfectly clear that she holds for her. It lacks the flash of having anacondas on one’s feet, but those are some remarkably subtle interview skills on her part.

On her way to defending her championship for the first time, Holly Holm has quietly and consistently proven just how worthy she is of it.