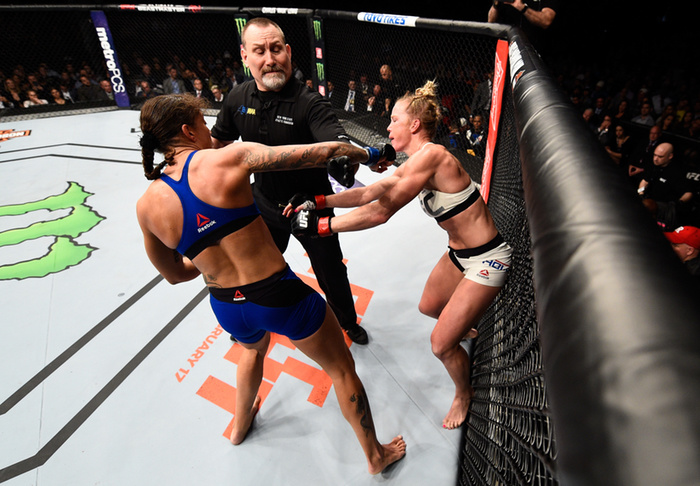 The most maddening part of watching Germaine de Randamie’s dull unanimous decision over Holly Holm at UFC 208 last Saturday came when she ended the third round with her tongue out and a smile on her face. de Randamie acquitted herself like a self-assured entertainer playing for a sympathetic audience. Instead, as a long evening reached its end, she was tone-deaf to how much she’d alienated the people watching her with everything she'd done wrong.

de Randamie-Holm's women's featherweight title fight wasn’t Dan Severn-Kimo Leopoldo levels of bad, but it was a bad fight all the same—the perfect confluence of crappy chemistry between opponents and a yawning 30-minute conclusion to the decision-heavy card, with the contrived crowning a champion for a nearly vacant division whose best fighter is caught in USADA limbo. And then, of course, there were two episodes of late hits that de Randamie landed on Holm in two consecutive rounds, and the referee who did almost nothing to dole out justice.

The first late punches, a hard one-two after the second-round horn, were the most egregious, and the blows visibly rattled Holm worse than any other in the fight. "[de Randamie] said she’s sorry, but that doesn’t mean anything, man," cage-side commentator Joe Rogan said between rounds. The combination punches that preceded de Randamie’s tongue wagging after the third didn’t connect, but they prompted Todd Anderson, the referee appointed to the main event by the New York State Athletic Commission, to take something resembling action. "If that happens again, we’re looking at a point," he said. Rogan was beside himself: the ref should have taken the point away right then, he said. Afterwards, UFC president Dana White criticized Anderson as too green to work a main event. 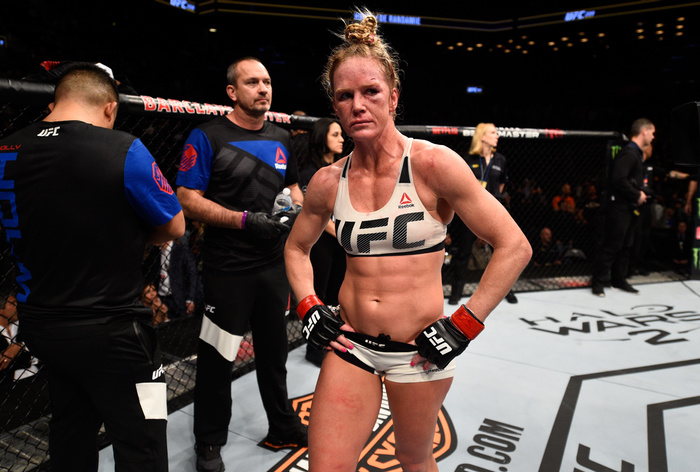 The truth is that fouls and the referees who ignore them don't matter much as long as the afflicted fighter still wins. Frank Trigg booting Matt Hughes in the nuts while referee Mario Yamasaki stood by, after all, only made Hughes’s slam and rear-naked choke finish more dramatic. But considering that de Randamie’s 48-47 victory—a score that reasonable people could question depending on how much weight Holm's clinch work deserves against de Randamie's striking—would have become a draw by deducting a single point, those late hits deserve closer inspection.

The language in the Unified Rules of Mixed Martial Arts lists "attacking an opponent after the bell has sounded the end of the round" as one of 31 fouls. That conflicts with what Rob Hinds, a referee trainer, told MMA Fighting: that the bell does not signal the end of the round and that the referee has to stop the action. However, Hinds also added that he would have taken a point away from de Randamie after her third-round infraction. Referees have wide discretion for many things, and Anderson fucked up by not deducting that point.

But there's another issue, one that Holm accidentally touched on in the post-fight presser when she said, "I wouldn't expect [the referee] to take a point after the first one, even though it was intentional." There's an insidious problem with normalizing referees' I'm-gonna-take-a-point-next-time approach: it gives temporary approval to the fouls that officials, fighters, and fans otherwise agree are beyond the pale. We don't want a fighter to haul off and punch his unsuspecting opponent after the bell, so we all agree they can do it at least once with near impunity. Might as well put an addendum in the Unified Rules: "each fighter gets one penalty-free soccer kick, eye poke, or late punch per fight."

Paradoxes aside, automatic point deductions for fouls shouldn't be a hard-and-fast rule either—the heat-of-the-moment defense is too real in the chaos and delirium of mixed martial arts, and the consequences of losing a point in a three-round fight are even more pronounced than a five-round title bout like de Randamie-Holm. de Randamie didn't arrive in the UFC with the reputation of a female Gilbert Yvel, so maybe we should take her at her word when she says that those late strikes were unintentional. And despite both fighters' calls for a rematch, razor-thin scoring and controversy over the fouls aren't worth running it back. (An appeal from Holm to the athletic commission to overturn the result is another matter.)

Instead, we need to reorient our thinking. A point deduction is a warning—with meaningful consequences instead of the reprimanding we've grown accustomed to hearing from referees. It's also a small price considering illegal punches like the one Holm absorbed have a lasting impact on the complexion of a fight, and on other things. Even if the fight had been declared a draw, considering how wobbly Holm looked while returning to her stool between the second and third round, de Randamie came out ahead.