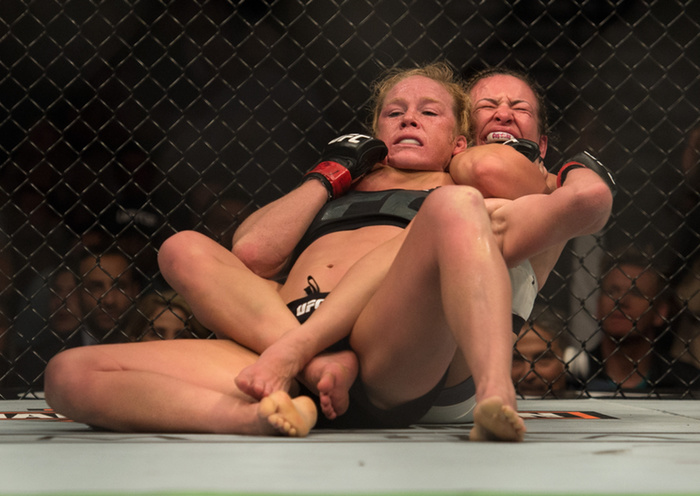 They call it the 'king of chokes' and it is clear to see why. Of the sixteen submission victories in the UFC through 2016 thus far, nine have been rear naked chokes. If that doesn't seem like many, consider the vast variety of positions a fight moves through and the dozens of submissions which are now mainstays in mixed martial arts. It might seem strange, a kimura and the arm attacks it flows into can be attacked from almost anywhere. Opportunities for guillotines from the top, bottom, in transition and while defending the takedown are more frequent than for almost any other submission attempt, and yet it is is the rear naked choke which dominates the statistics year after year. But the rear naked choke is a lot more versatile than you might think and the paths which lead a fight from the opening bell to the choke itself are more numerous than you can imagine.

The rear naked choke (naked for the reason that it uses no cloth) has existed for generations in one form or another. The hadaka-jime in judo and jujutsu, the sleeper hold, rear chancery, or the Japanese strangle hold in catch wrestling and in old military manuals on hand-to-hand combat. The mata leao if you are feeling particularly romantic: Portuguese for 'lion killer'. BJJ Heroes recounts the naming of this choke by Reylson Gracie and draws attention to the many works of art of the legend of Hercules and the Nemean Lion which depict the demi-god choking the lion.

While it seems like getting on a lion's back might be the safest place when locked in a struggle with the king of the jungle, you might want to reassess your strategy once you realize that the neck strength and girth of a big cat is likely to render them immune to your choke, even if you can get your arm around it. But just because it cannot mata a leao doesn't mean it's anything less than the finest technique in all of martial arts. It can still most certainly choke someone, from the back, even while naked so it at least does what it says on the tin in one language. 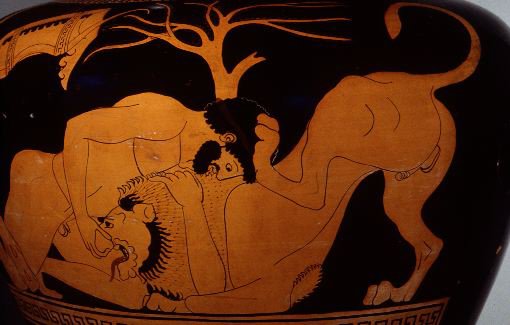 Where a naked front headlock seems like a disaster waiting to happen.

Skipping to the End

The problem with the rear naked choke is that if it is applied correctly it is the ending point of a fight, but scanning the results or even watching a fight live and seeing a rear naked choke can be as dangerous to your perception of what actually happened as scanning a wikipedia synopsis before you run out the door to the book club you haven't prepared for. There are simply so, so many ways that a fighter can arrive at the choke and not all of them mean what they appear to on the surface.

Take for instance the pair of high profile rear naked chokes on UFC 196. The same conclusion arrived at in two entirely different manners. There are still some claiming that Conor McGregor's getting choked was evidence of his lack of skill on the ground. But a pure grappling match between Nate Diaz and Conor McGregor was not what we were watching. McGregor is probably the lesser grappler, but he had been tired out and badly hurt by Diaz's boxing and transitioned into the grappling phase of the bout in a wobbly panic. The bout was fought and won by Diaz on the feet, the choke came as the coup de grace.

On the same card as Conor McGregor versus Nate Diaz, Holly Holm lost her title in an instant to a rear naked choke. She was not hurt, she didn't concede the position in a shaky moment, Miesha Tate shot a last minute takedown and transitioned straight to the champion's back. Getting the choke in before Holm could begin to hand fight and defend. The story of the fight up to that point had been of Holm doing the damage on the feet and getting through the rounds relatively unmarked, but Tate coming dangerously close to the choke in the second round and succeeding with it later in the fifth. Tate attacked with almost nothing else of note: the shot, the back take and the choke were the be all and end all of her success.

The rear naked choke is the greatest attack in the no gi jiu jitsu arsenal because of the positioning it is initiated from. On the opponent's back where they have zero effective means of attacking you, spare the odd attempt at some kind of straight armlock which will rarely, if ever, work on an experienced grappler. But there are a thousand ways of the fight transitioning into this final phase.

For instance, we have all seen a fighter take a brutal beating from the bottom of the mount and willingly turning his back seemingly to give away the choke. It is instinctive to turn the back when taking damage, and on the bottom of mount the instinct of most men overcomes their training when they take a few good, solid blows to the head. Sometimes the choke from the top fighter will look shoddy and almost like an afterthought and the fighter underneath will not even attempt to fight it off but instead get his hand ready to tap. It is a respectable way out for the losing man, but it doesn't always point to 'poor choke defense' as those on the internet would have you believe.

Alternatively it can only take a second, and not even require that the back mount be secured. When focusing so heavily on the idea of dominant position—the reason that the choke is such a common finish to bouts to begin with—fighters can forget that not having the position doesn't always render the technique ineffective. Though I will grant this is considerably more rare. Marcelo Garcia's famous grappling bout with Vitor Ribeiro saw the grappling world wake up to this realization and for a time afterwards in his early instructional material Garcia himself advocated going for the neck before securing the hooks if possible. Notice how Garcia secures the choke even while Ribeiro is denying the hooks.

And of course there have been a number of instances of the famous bulldog chokes in mixed martial arts. Essentially a rear naked choke but beside the body as in a headlock or the bulldog of professional wrestling. Carlos Newton's submission of Pat Miletich as Miletich shucked Newton away from his back is the most famous example of this technique in action in MMA. It is doubtful Newton was looking for this specific variation of choke, but rather went for the neck regardless of whether he could get the hooks in and on this occasion it paid off. Weirdly enough, we waited a decade for the next bulldog choke in the UFC and we got two on the same night at UFC 181 from Urijah Faber and Raquel Pennington.

There are a number of fighters who have gained a reputation for their 'poor choke defense' when a great many of their losses, while culminating in chokes, saw them getting banged up on the feet or dominated on the ground first. A memorable instance was Melvin Guillard's loss to Joe Lauzon. Guillard had succumbed to chokes in the past, it's true, and Lauzon was better on the ground, but simply watching the finish it is easy to lose track of the perfectly timed counter left which saw Guillard's legs give out on him just seconds before Lauzon got on top of Guillard and took his back. Takanori Gomi was another, most of the losses in which he was finished came by way of choke, but he lost a good few of those fights long before the arm snuck under his chin.

Frank Trigg's bout with Georges St. Pierre really highlights that 'rear naked choke defence' is akin to the idea of 'duck and cover' in the event of a hydrogen bomb being dropped on your town. There aren't many approaches, you can't fight aggressively  with an opponent on your back, you have no means by which to attack them, and most decent grapplers have worked basic grip strips to chokes into their muscle memory over hundreds of hours of rolling. Trigg repeatedly fought off the choke against GSP and struggled back to half guard, but every time GSP would just drive forwards to mount and Trigg would give up his back again. Gameplanning for the worst case scenario is important, but expecting to work effectively while continuing to be at such a disadvantage is delusional. It is as Jean Jacques Machado used to quip about defending from underneath the mount—if you are concerned about defending yourself from the mount, you messed up a long way back.

One of the few times that 'rear naked choke defense' did truly win a fight in recent memory was in Marcelo Garcia's sole MMA bout. The grappling wizard met Dae Won Kim in K-1 Heroes and reportedly all Kim had been working on was fighting off rear naked chokes in MMA gloves. Garcia got the back early, as expected, but couldn't get the choke in. Finally Kim scrambled up and Garcia never got him down again. At the opening of the second round Garcia was hurt with a clumsy right hand and slashed open with a knee as he ducked low. The fight was waved off and everyone was a little bit confused by what they had just seen.

And perhaps you could include Kimbo Slice's victory over Ken Shamrock which also serves to highlight that even the timeless rear naked choke has been updated and refined over the years. Watching old timey wrestlers and especially the fighters of early Pancrase events demonstrate the classical biceps grip version of the choke, you will notice that many will put their non-choking hand high on the back of the opponent's head, even bringing it over the front of their face in order to get it there. This makes the act of peeling the hand off and tying it up much more viable.

For this reason the hand which isn't around the opponent's neck is now normally slid through between the chest and the back of the opponent's neck, and kept well behind the head and the attacking man's chest and head being kept close to hide the hand further. It is part of that ongoing process of eliminating space in jiu jitsu evolution.

Sometimes guys will work towards the choke methodically through a dominating performance—think B.J. Penn boxing his man up, driving into half guard and passing straight to mount, taking the back and looking to pin one of the opponent's arms with his own heel. Other times it will be muscled on in a desperate attempt to finish in a change of momentum as when Fedor Emelianenko smashed Kazayuki Fujita in the ribs and dragged him up from the turtle by a short choke across the throat while still reeling from a Fujita haymaker moments before. The rear naked choke is the close of a thousand stories in the cage and it will likely always be the most common means of submission victory simply because of the nature of the back position, the advantages it gives and the countless ways it can be obtained. But very rarely are any of these stories as simple as Loss: Submission (Rear Naked Choke) on a record will indicate.

Death of a Southpaw: How Conor McGregor Lost To Nate Diaz