The Rise and Fall of Muay Thai Legend Namsaknoi Yudthagarngamtorn 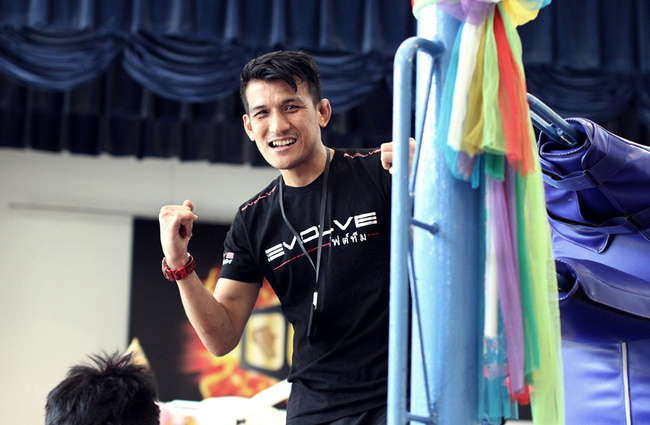 An increase in the global popularity of Muay Thai has helped the top fighters of the modern era become international superstars. But before the advent of Youtube even the most successful of ‘Nak Muay’ were virtually unknown outside of Thailand.

Fights from the late 90s and early 2000s are still difficult to find online, meaning that fighters like Namsaknoi Yudthagarngamtorn missed out on getting the global recognition they deserved. His reign as Lumpinee champion ended in 2006 and there is very little footage of the 35-year-old in his prime.

Namsaknoi won ‘Fighter of the Year’ awards in 1996 and 1999. As well as being arguably the best Muay Thai practitioner of that generation he was also renowned for the grace and beauty of his Wai Kru and won numerous awards for his interpretation of the pre fight dance that is traditional in Thailand.

Today he is happily retired from fighting and has a lucrative job as a Muay Thai instructor at Evolve MMA in Singapore. But Namsaknoi’s story is not an entirely happy one because his accomplishments in the ring did not initially earn him either the respect or the riches he deserved. 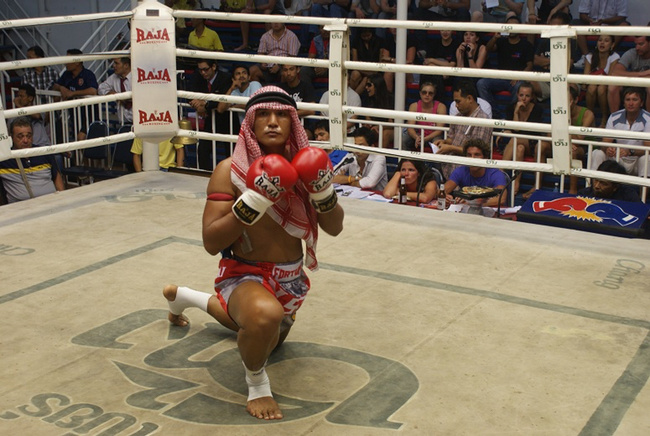 His story begins in Chaiya, a small town in Surat Thani province. The vast majority of elite level Muay Thai fighters are from Isan in the North East but as a Muslim from the South of Thailand Namsaknoi would go on to buck this trend.

Namsaknoi was the youngest of seven children and decided at an early age that he wanted to follow in the footsteps of his Grandfather, who had enjoyed some success on the local Muay Thai circuit,

“My Grandfather who has passed away now was quite famous in the south of Thailand as a fighter. He often asked my Mother to take me to see him and he would whisper incantations to me. Nobody knew what he was saying but perhaps he knew that I would one day continue his legacy and bring pride to the family.”

His Grandfather might have been a big name in some of the Southern provinces but Namsaknoi would go on to become the biggest name in Thailand. This journey began when he was just eight years old,

“The moment I stepped into the village camp for the first time I knew that I was born to fight. Even though I was the scrawniest kid in the camp I turned out to be a natural, and I asked to have my first fight at the local temple fair after just six months of training. My opponent already had a couple of fights but I won by knocking him down with knee strikes to the body and I believe Grandpa's presence was there that day, watching over me from my corner.” 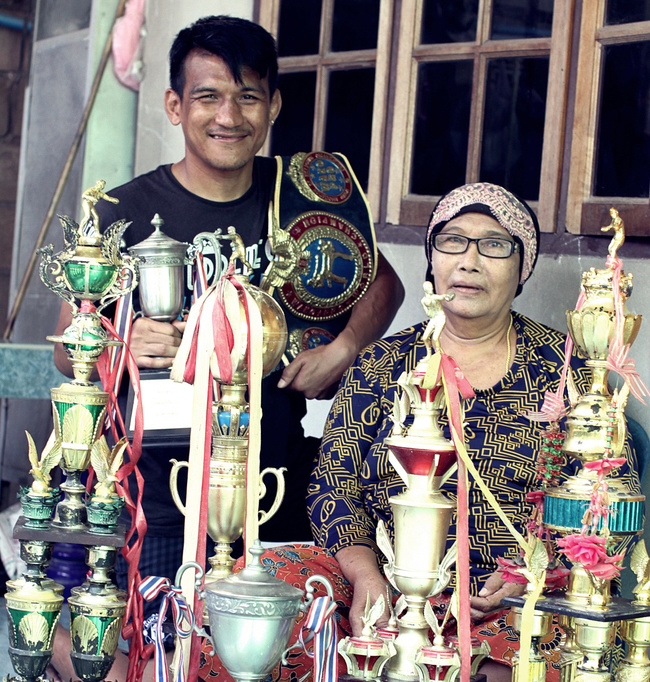 Namsaknoi now boasts a record of around 270-15-5 and during his peak as a Lumpinee champion he commanded purses in excess of 150,000 Baht. For winning that first fight he was handed just 150 Baht but it was a significant sum of money to an eight year old boy whose family was surviving very close to the poverty line,

“I was one of seven brothers and sisters living with my Mother and Father in a small shed at the back of my uncle’s house. My parents were both fishermen catching shrimp and I would wait for them at the pier after school to help them take their catch to the market. My Mother was a good cook and even after I left home to join a fight camp in Bangkok she would visit me sometimes and cook for everyone. Everyone remembers her for her amazing dishes.”

Namsaknoi almost always declines interviews. He’s happy to talk about his childhood and doesn’t mind discussing life as a trainer in Singapore. It is the bit in between that brings back painful memories because he was left penniless after making the fatal mistake of entrusting all his purse money to the gym’s management.

At the time Namsaknoi was the star of the Por Pramuk gym but he grew impatient waiting for the prize money he had been promised to materialize and decided to walk away from the camp one and for all,

“I was broken and depressed when I finally left Por Pramuk, leaving behind all my possessions including the Lumpinee belts. I was sick and tired of empty promises and my ex boss’ mismanagement of my prize winnings. I walked out a free man, no longer bound to a gym but with no money to my name and nearing the end of my fight career the world suddenly seemed very uncertain and frightening.” 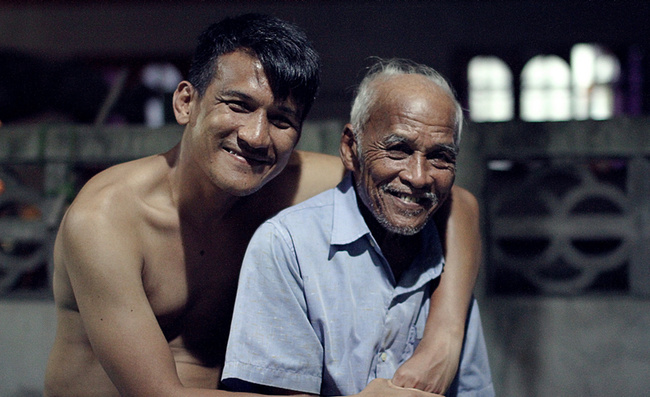 In 1999 Namsaknoi won a Ford Ranger after winning a tournament in Thailand but he would never even see the vehicle, let alone get behind the wheel himself. Years later his younger team mate Buakaw would make headlines around the world after speaking out about similar treatment at the hands of the Por Pramuk management.

Buakaw’s fallout with Por Pramuk attracted widespread media attention and the Sports Authority of Thailand eventually stepped in to mediate. By contrast Namsaknoi received little by way of sympathy or support and returned to his hometown with nothing to show for his glorious Muay Thai career,

“I returned home to my village in Chaiya where my family and childhood friends took me in. My friends got me to help out with jobs of making fishing nets for sale and on the days that I worked I got paid about 200 Baht a day.”

From the limelight of Lumpinee Stadium, where thousands of people would watch him compete, Namsaknoi found himself doing menial work for the equivalent of a few dollars a day. It was a sad situation but a phone call from a friend would send him back to the sport where he made his name,

“One day back at home I received a call about a new gym on Koh Phangan which was offering 10,000 Baht a month for work as a trainer. I had never taught before and was not sure if I could do it and when I went to the gym nobody recognized me because my hair had grown long. When I told the boss I was a stadium champion in Bangkok she didn’t believe me and asked me to spar with one of the trainers to test my skills. He couldn't touch me at all.”

Having proved his credentials in an impromptu sparring match the former ‘Fighter of the Year’ began working as a Muay Thai trainer. Namsaknoi went on to work at a few camps in Thailand but was still struggling to make ends meet and would take fights that he barely had time to train for in exchange for a fraction of the money he could have commanded during his prime.

Things finally started to turn around for the famous former champion when he was offered a lucrative job as a trainer in Singapore,

“One day, I received a call from Saknarong Sityodtong, a senior instructor at Evolve MMA, inviting me to join him at Evolve MMA in Singapore. At first I wasn't sure because I didn’t know much about Singapore but I decided I could trust the boss and all the students and staff are friendly.”

Instructors at Evolve MMA earn between 5,000 and 15,000 SGD a month for teaching students of all level and sharing their experience with the official fight team. It’s a far cry from the days when Namsaknoi was sewing fishing nets for a living and the 35 year old’s family have felt the benefit of his good fortune,

“My Mum had an accident recently and broke her leg, she had to have a big operation in the city hospital. With the money I have saved from working at Evolve MMA I was able to pay for her operation in cash.”

Namsaknoi has finally found the financial security which eluded him during his fighting career. However there is still a tinge of sadness and regret because despite having won multiple titles and tournaments he hardly has any of his belts to display,

“I have asked Mr Pramuk on several occasions to let me take my belts back from the gym but he told me that some are lost, and some have been taken away. Maybe he has sold them off to collectors.”

Even the most famous Muay Thai fighters often end up penniless and poverty stricken after retiring. A lifetime spent learning to kick, punch elbow and clinch does not offer much by way of lessons in sensible financial management and Namsaknoi has the following advice to anyone starting out in the sport,

“Make sure your manager pays you as promised and that all the money goes into a bank account in your own name. You have to think and plan for your future, and use your money wisely. I wish someone had given me these advices when I was a young Nak Muay.”

Changing Seasons of Muay Thai: The Lives of Four Fighters One Year Later