The Rise of Johny Hendricks and the Beard 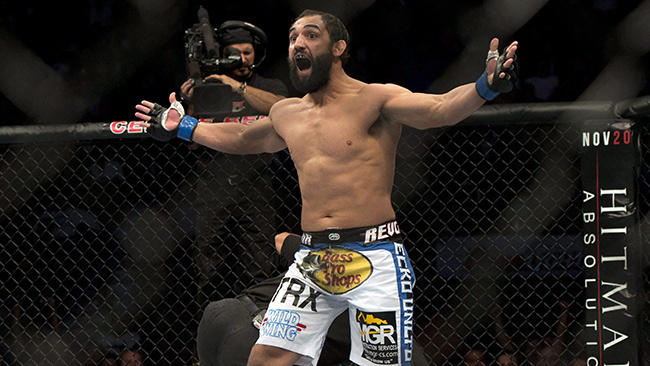 In the quest for American pop-cultural legitimacy there’s no more significant step you can take than into the arms of multinational corporate approbation. Say what you will about the cultural influence of twerking, electronic music, Louis CK, Bansky, or any other previously underground/now-very-much-overground artistic phenomenon--until the corporate world has reached down from its high perch and blessed you, you haven’t really made it in America.

One can very easily look at the relatively short history of mixed martial arts and see it as a slow, inexorable march toward mass-cultural acceptance. Like punk rock and hip-hop before it, MMA started in shadows and basements, getting its first taste of recognition entirely through controversy, then inching its way, year after year--sometimes in fits, other times in bursts—into the light of Madison Avenue legitimacy. And then, before you could say “Green Day” or “Puffy Daddy,” there it was: professional fighting on your television, in your living room, in primetime, starring a professional killer covered in Nike swooshes.

Still, the climb has been slow and long for MMA and its advocates, particularly when it comes to the lucrative world of sports-apparel endorsement deals. Sure, Georges St-Pierre has been sponsored by Gatorade and Anderson Silva, Jon Jones, and Junior dos Santos all got Nike deals, but when all those deals went down, all those men were champions and arguably the biggest names in the sport. But recently the sport took a great leap forward when it was announced that Reebok had not only signed a sponsorship deal with Johny Hendricks, a fighter all but unknown outside the world of MMA, but also agreed to pay the UFC’s sponsor tax, meaning the company's logo will be all over Hendricks when he walks out to fight GSP for the welterweight championship on November 16. Reebok has sponsored fighters in the past, but they’d always declined to pay the tax that would allow them to actually advertise on those fighters during fights. The Reebok/Hendricks agreement, in other words, is not just a big moment for Johnny Hendricks (and recognition of his elevation to trans-MMA status), it’s a big moment for the sport as a whole—one giant leap into the arms of Madison Avenue.

Of course the deal is also indicative of the arrival of a different, and just as scrappy, cultural phenomenon: the giant, hipster beard. Take away Johnny Hendricks’ massive frame, bulging muscles, and titanic left fist, and what you’re left with is a character you might see standing in any dive bar in East Austin or on any street corner in Bushwick, Brooklyn—the ironic rocker with the enormous, thick, Civil War, beard-of-bees beard, a few short years ago just a cultural anomaly, emblematic of one of any number of hipster cultural fads that appear and then disappear every year, but one that not only stuck around long enough to become pervasive in hipster culture, but to insinuate itself into the mainstream.

How perfect then that the news of Reebok’s decision to back Hendricks all the way broke on the same day that the Boston Red Sox won the World Series? For all its push for grown-up legitimacy, MMA is still an upstart, still just a kid in the American cultural and sporting imagination. Part of its image and its appeal is in its rebel nature, so having a poster boy who looks like the bass player in a East Williamsburg art-rock band makes sense. But baseball? What could be more accepted, more mature, more entrenched in the American experience than baseball? Yet there they were—the Boston Beards: that rowdy band of ball players dressed up to look like 19th-century abolitionists—claiming a world championship, tattoos on their arms, facial hair hanging down to the ground, heroes of a new age. Johny Hendricks would have fit right in.

Of course you could argue that baseball players wearing beards from 100 years ago is less a modern cultural movement then a throwback—players of a traditionalist sport being traditionalists—but you’d be wrong. The Red Sox represent the new generation of baseball, and their ascent, and their teams’ marketing department’s clever monetization of that ascent, represents the final re-appropriation of a true homegrown facial hair movement. And the rise of Johny Hendricks into the rarefied air of not only GSP, Jones, and Silva, but Peyton Manning, Justin Verlander, and Venus Williams, means not only that he’s arrived but that the beard—the huge, bushy, ridiculous, what-are-you-thinking? beard—has arrived as well.

Ian McCall, the ball is now in your court.