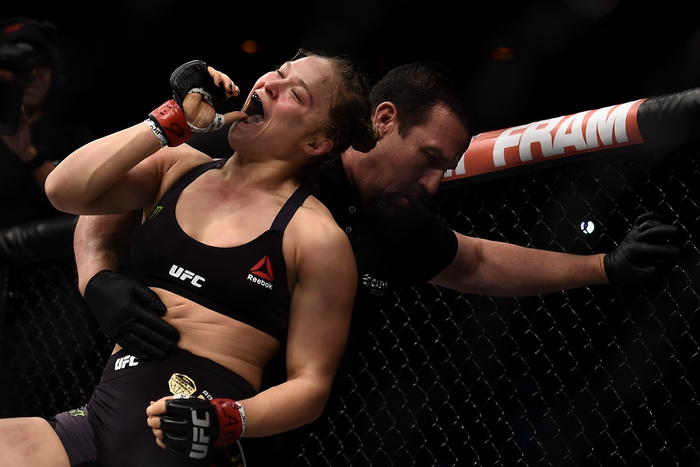 A year ago, the mixed martial arts community found itself in the grips of a sinister delirium. The devil had come to Salem Village and there was a feeling of great unease wherever you went. A sickness had begun to catch. The outward symptoms were few and no one was quite sure how it was spread. Was it ergotism from the nachos on sale at UFC events? The wrath of God? Was it witchcraft? The better off began to hide themselves away for fear of being contaminated and did nothing to even try to curb the advance of the plague. But distance and doors did nothing to hold back the affliction. A peculiar plague which is still neither understood nor completely dead. Only dormant until it flares up again with seemingly no rhyme or reason.

On this very night, one year past, the fever burst out of the Internet MMA community and began to take a hold, infecting pop culture and real news outlets. After UFC 190 a local delusion became a worldwide epidemic. You could try to hide from it. You could shut yourself up and wait for it to pass. You could go about your week pretending everything was okay and that the world outside was not on fire. If you smiled hard enough you could drown out the screams of your neighbors. But one day you would be eating your dinner and a loved one might say in an off-hand remark like, “Well, not a top ten bantamweight, but she could probably beat most male bantamweights.” And then you would know that it was locked in there with you. You would notice the space behind your companion's eyes, they were all but gone and you would curse yourself for being so distracted as to not notice that you had been sharing your home with a husk. Your heart would begin to pound as you scanned the room for exits before realizing it was hopeless. The damage was done. The panic would subside and you would find yourself saying “yes, perhaps if she got the clinch quickly enough...”

Rousey-mania, like many strains of infectious disease, did not behave as the scientists expected. Surely it should have been at its strongest when Rousey easily dispatched the Olympic medalist, Sara McMann. When Rousey decimated Cat Zingano, the consensus number two in the world at women's bantamweight, surely that was when the fever could have caught a hold? No, it was when Rousey swung wild at the unaccomplished and unassuming Bethe Correira that the infection took its greatest body count and perhaps we should be grateful because it gave us the chance we needed to spot the afflicted.

When people began talking about how sharp Rousey's boxing was, looking in that fight, you knew they were seeing something you were not. They were seeing something that wasn't there. In the opening moments of the fight Rousey literally bum rushed Correira. That is how Rousey has always fought: a bum rush into the clinch. Except this time one of the less agile members of the UFC roster side stepped her and Rousey steamed past, with only Correira's corn rows saving her from flying into the opposite wall of the Octagon.

Everything you need to know about Rousey's boxing is visible there but can also be seen in all of her other fights. She moves in with her head stationary, throws out a purposeless jab, then leads with her face as she leans well forward of her hips to throw the right hand, ruining her own balance and sending her stumbling in this instance. In fact, all the Correia fight showed was a much, much less competent boxer than Holly Holm showing exactly how effective lateral movement could be against Rousey. Notice how every right hand Rousey throws sends her past her target and the time she spends recovering. Rousey constantly had to turn a full ninety degrees to get her opponent back in front of her. When Correia got caught in the clinch it is because she returned with her right hand, setting her feet and squaring up. It's the same story as every Rousey fight, trying to punch her hard in the face right off the bat will get you clinched. But circling and letting her miss her wild, unbalanced right hands will quickly tire her out.

A trip sent Correia to the mat and she back rolled towards the fence. Rousey ran in face first with both hands pumping at almost the same time. Rousey squared her stance and delivered a salvo of punches, constantly pushing her own face onto Correia's punches.

As Rousey chased Correia along the fence she finally connected the right hand she had been swinging from the beginning and sent Correia to the mat. Rousey's elite boxing claimed another victim.

Of course, if you looked at her work objectively you knew that her striking was hype. A lot of people slag off her shadow boxing because she is so often shown slapping her own face with her shoulders, tilting her head, and flicking her elbows out but honestly that seems disingenuous as that isn't how she fights at all. Equally her work on the mitts, throwing lengthy combinations before slipping agreed upon returns is not anything like the way she fights but could certainly be a part of the problem. The way she has always fought is in simple one-twos, with her feet on a line until she wants to swing her right hand, and with no lateral movement—relying instead on long pivots after her opponent has already left the firing line.

We could lay into Rousey's coach, Edmond, but that's been done so many times already. The important parts seem to be that Glendale Fight Club fighters completely eschews kicks and that there just aren't many top fighters there. Perhaps Edmond did teach Rousey to cut the ring and try to correct the massive overcommitments on her right hands, but if she's not sparring top tier female fighters she's not going to have to adjust that. When Jake Ellenberger got over to Kings MMA, where many of the best fighters in the world either train full time or drop in for the odd session, and the coaches there reminded him that he owns a set of legs he suddenly became a more confident and dangerous fighter.

Rousey's main issue seems to be that she gets to work on her boxing on a whim and do whatever she likes. A one dimensional striker or grappler training at a top camp doesn't just get to go through the motions on their weaker aspects. If you are a judoka or boxer and you go to train at Jackson/Winkeljohn or Tristar or Kings you are kickboxing with some of the best fighters in your division every day or two. Look at Jake Shields—not a pretty striker but he kickboxes with top notch guys day in and day out, and while it was boring he went unharmed as he boxed the new welterweight champion, Tyron Woodley to a decision victory. The camps built around one star, where that one star does not get pushed by their peers every day, often produce diminishing returns and suddenly that star will make tremendous strides when they go to a camp where they get no special treatment and are just another fighter there for practice.

They're Telling You Porky Pies...

But the lesson here is not that Rousey's boxing is bad. That has been flogged gleefully like a dead horse and is not news. The lesson is that a great many fans were made to believe it wasn't. A lot of experienced pundits even began to convince themselves. That is the sinister part. There was no reason anyone should have cared about Rousey knocking out Correia—whose UFC opponents were a combined 1-7 in the organization. Yet it sold nearly a million pay-per-views and half the MMA world was convinced. There was a point between the Correia fight and the Holm fight where if you worked in the MMA media, people would ask you whether Rousey could beat many of the male bantamweights. And the correct answer (that she probably couldn't beat any of the UFC's male flyweights) would get you shouted down. Rousey was even made to be a role model for young girls everywhere while simultaneously recounting her assault of a former boyfriend in her book. Hype is not a short term thing it is a long term process of attrition. The Correia fight just pushed Rousey fever over the edge. The hyperbole about Rousey's striking, Rousey vs men and Rousey going to boxing had been droning on for a long time. The easy knockout over an overmatched opponent just gave the world something immediate to grab onto. Hell, if you were willing to pay $60 for the card that was UFC 190 you were probably already sold on the hype.

So today, a year removed from Rousey vs Correia, remind yourself that you are being sold to constantly. Sometimes by promoters, sometimes by well meaning people caught up in the hype themselves. Take every victory a fighter gets with a grain of salt. Ask what the beaten fighter had shown before and after that fight. No one will ever get upset at you for saying “well he/she has beaten everyone they have put in front of him/her but I'd like to see him/her fight x”. People will laugh at you for claiming that said fighter could dominate the weight class above, take cross gender fights or make a run at a boxing career when they eventually lose to someone with the right skills in their weak areas though. And should you find yourself surrounded by those succumbing to the hype, shut yourself away for a few days and remember to burn the corpses when you emerge.