The Spectacle of Excess: Pro Wrestling and the Concept of the "Perfect Bastard" 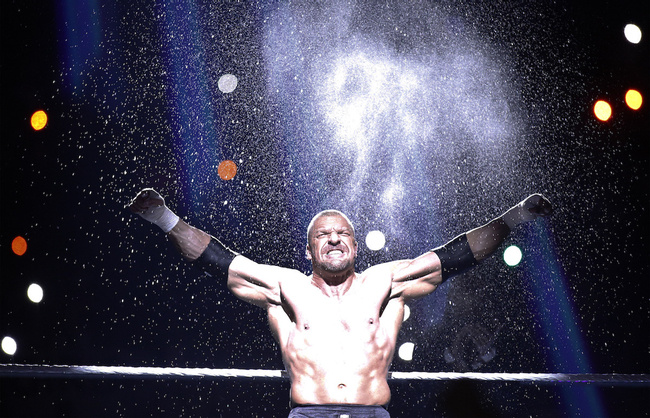 "When people suspend their beliefs and invest in wrestling, they allow the wrestlers to become gods." This opinion is not a display of supreme ego from Chris Renfrew, one of Scotland's most successful indie wrestlers. Rather, it is his honest response to The World of Wrestling, an essay written by Roland Barthes in 1972.

Barthes was among the twentieth century's most influential theorists. His work impacted upon an enormous range of fields, including literary criticism, theatre studies, and linguistics. He was also a wrestling fan.

Barthes claimed that, while in the ring, wrestlers are "the key which opens nature, the pure gesture which separates Good from Evil." Renfrew's response to those words highlights two things: firstly, the passion that the former ICW heavyweight champion has for his work; and secondly, just how forward-thinking Barthes' ideas about wrestling were. In 1972 the first iteration of Wrestlemania was still 13 years away and the notion of staging a show in a venue the size of Florida's Citrus Bowl – where Wrestlemania 33 will take place this Sunday (2 April) – would have been considered sheer madness by almost everyone involved with the industry.

Yet while he would no doubt be surprised to see what wrestling looks like in 2017, are Barthes' observations from all those years ago irrelevant now? Probably not.

The essay opens with: "The virtue of all-in wrestling is that it is the spectacle of excess." Does Renshaw think that fair? "Definitely," he replies. "Everything is and always will be over the top in the world of wrestling."

It's hard to argue with this conclusion. Whether watching a show in Camden's Electric Ballroom or the AT&T Stadium in Texas, it is impossible not to feel that you are witnessing something built on exaggerated words and actions.

Few embody this better than Triple H. His Wrestlemania entrances tend to involve the 'Cerebral Assassin' rising from a stone throne, wearing a crown of gold and accompanied by anonymous warriors who form his bodyguard. It is opulent and over the top in a way that Barthes could hardly have imagined, but still very much the "spectacle of excess" that he knew.

In fact, Triple H is a wrestler that Barthes would find especially recognisable. The theorist argued that for the stories in wrestling to be successful the villain – or 'heel', in industry parlance – must be the image of a "perfect bastard". Triple H is nothing if not that, with Monday's edition of Raw, WWE's flagship programme, providing ample evidence of his wicked ways.

A few months ago Triple H was indirectly responsible for injuring Seth Rollins, to the extent that he would likely miss Wrestlemania. Then, when it seemed Rollins might recover, Triple H deliberately and methodically exacerbated Rollins' injury. On Monday, Triple H goaded Rollins into waiving his employment rights so that, despite his lack of medical clearance, he could seek revenge against his tormentor this Sunday. Rollins took the bait but, before the ink was dry, Triple H assaulted him, doing his best to once again cripple his rival.

I'm retelling this story in biased way, because I'm on the side of Rollins. Triple H is the villain of the piece, the "perfect bastard". Though obviously this isn't what Triple H (real name Paul Levesque) is really like – it is a role that he plays.

Barthes understood this, writing: "The function of the wrestler is not to win; it is to go exactly through the motions which are expected of him." We expect Triple H to behave like this and we like it when he does because it vindicates our desire to see his victims take their revenge.

It's clear that Renfrew instinctively thinks in this way, too. When I ask him how he knows he's done a good job at the end of a fight, he says: "If the crowd have reacted the way I intended them to then I know. It is all about the audience and their reactions, so if they are either cheering or reacting in a negative fashion because of what I have portrayed in the ring, then that is the job done well."

Nestled among those criteria for self-evaluation is the core of what Barthes believed wrestling was about: justice. In his own words: "The idea of 'paying' is essential to wrestling and the crowd's shout of 'Give it to him!' really means 'Make him pay!'" It would be impossible for performers to produce that reaction if they did not attune themselves to the mood of the crowds in the way that Renshaw does. But this is also perhaps where the greatest divergence from the days of Barthes has occurred.

Thinking on this Renfrew says: "The rise of the anti-hero has changed what the morals of a top guy are. But, by and large, people still want to see good prevail."

"By and large" is a crucial caveat here. The difference between the good guys and the bad is no longer as clear cut as it once was. An example can be found in the modern day WWE, where Roman Reigns is presented as heroic but generally receives thunderous boos wherever he goes.

On the other side of that coin are wrestlers like AJ Styles. Styles is shown to be more morally ambiguous than your average wrestler, and certainly comes across as an arrogant man. However, because of his technical proficiency as a performer there are fans who will loudly praise him, regardless of what he says with a microphone in his hand.

It is easy to imagine Barthes at ringside on Sunday, self-consciously indulging himself in the excess. He would likely be baffled when the supposed hero Reigns is jeered and mocked by those around him as he squares off against The Undertaker, a living embodiment of death. He would likely struggle to know who to cheer for when the demonic Bray Wyatt fights Randy Orton, a man who prides himself on being a snake. Neverthless, it seems certain that Barthes would recognise and relish the spectacle playing out before him.

WWE's Rumored Ring of Honor Buyout, and the Value of History