The Sting of Retirement: A Conversation with Nick Blackwell 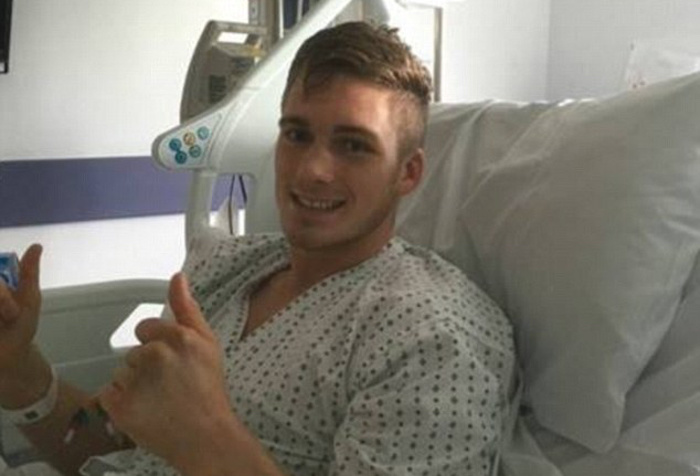 It’s been said by some that former British middleweight champ Nick Blackwell is too brave for his own good. Fighting through ten punishing rounds with Chris Eubank Jr back in April, Blackwell certainly showed more heart than most. There was little inkling early on that this was to be the final fight of the 25-year-old’s career. As lean and pretty as middleweight fighters come, Blackwell looked confident that evening—bolstered by the jeering of his champion pals at ringside.

Eubank Jr—bafflingly fighting for a British title when a world title fight had been open to him—seemed full of cold rage, throwing devastating combinations throughout. It was a show of spectacular and brutal talent. Blackwell consistently returned blows, but sustained enough damage to be losing on points by the eighth round. To his credit, Blackwell stayed upright and alert for the duration.

A grotesquely swollen eye forced the fight to end in the 10th—and then the unthinkable happened. After the fight, Nick collapsed and was sent to the hospital with a small bleed on the brain. He was put into an induced coma, and the boxing community feared the worst. Such serious injury is a rarity in the sport, but it couldn’t help to chillingly recall the brutal consequences of the Watson/Eubank fight in 1991.

Thankfully, the Cardiff-based fighter has made a full recovery, with no lasting health effects. In talking to Nick, the sting of his early retirement still seems fresh—but he is optimistic about the future.

Fightland: What have you been up to lately? What does a typical day look like for you?
Nick Blackwell: It’s been a little bit all over the place. I’m used to being quite structured, getting out there and training, eating with the lads in Cardiff and training again. At the moment, I’m still getting up and training, eating healthy—and looking to find a big enough building to put a gym in, but actually it’s a bit harder than I thought. So I’m just trying to do little bits and bobs.

I saw you met up with David Haye recently. He raised a lot of money for you, didn’t he?
Yeah, he’s a gentleman. An absolute gentleman. People say bad things about him, but from being in his company for an hour, he’s a really nice bloke. He didn’t have to do what he’s done for me. He’s been texting me to see how I am, trying to help me put my money into other things, getting me into commentary. He’s been a massive help and he’s still doing it.

Did he have any advice for you?
Yeah, to be careful with money. He thought I talk well and present myself quite well, so it’d be good to have someone young involved in commentary. It’s something I’d really enjoy as well, talking about what I love—what I used to love—doing.  Yeah, so he was just giving me advice—telling me mistakes he used to make, making sure I don’t make those mistakes.

So what are your plans going forward? Open your own gym, train, commentary?
I want to do a bit of everything! I’ve got my trainers license, so I can train people up. I don’t necessarily want to open a gym up and train professional boxers at the moment. But I’m going to be in the gym, be in the corner for every single one of the lads in Cardiff’s fights—Alex Hughes, Liam Williams, Zack Davis, Enzo Macrinelli—helping them. It’ll be nice not to lose the contact that I had with them being there every single day training with them. So I’m gonna get my trainer’s license, open up my gym, and encourage people to be fit and healthy—do a boxing class. […] But I just want to open a gym up and go from there.

Yeah, I think boxing can do a lot for young boys and girls even just through training and sparring. Giving them discipline and getting them fit.
Exactly, it’s what happened to me. I was one of those kids. I was naughty and quite cheeky, and full of energy—if I hadn’t started boxing, I’d probably be doing something not so positive. And I’m in a town where there’s a lot of kids like that. There are a lot that say ‘We want to come into the gym and train’, it’d be great to have a place for all those kids. It helped me out, so it’ll help them out. It’s what you said—sorts the discipline out, gets ‘em healthy, stop causing trouble, something to look forward to and be able to fight. They have to find the right path.

Viewers and fighters both know there’s an element of danger in boxing. Having gone through what you have, would you have any advice to the kids you’re training?
Keep your guard up and don’t get hit! My style didn’t really help me—I wasn’t really right for that fight anyway. Not taking it away from Chris Eubank Jr—he’s a good fighter. But with every sport there’s a danger factor—boxing I think is 8th or 9th most dangerous. […] But the way its come on now, with the medics, in my case—if that happened 20 years ago like with Michael Watson, I probably wouldn’t be here speaking to you now. It shows how far we’ve come on. I feel fine now, I’m back to normal. My head feels fine, I feel fit and healthy. I have no effects and I’m lucky, but that was because the medics were right there for me.

What was going through your head during the fight? What kept you on your feet through the whole thing?
I can’t remember the fight to be honest—I can’t remember. Most of the damage is done while you’re in training […] I didn’t go into the fight feeling 100%, but I just put it down to, you know, you’re making weight, you’re nervous for the big event. Obviously I never thought…but I was getting too many blows. It’s just me, I am what I am, I keep going. I’d have went 15 rounds if I had to. So it was a blessing in disguise that the swelling came up over my eye, because if I’d have went two more rounds, the outcome could have been a lot worse for me. Like I say, it’s one of those things in boxing—we all sign up and know it could happen, but we never think it’s going to happen to us. And unfortunately it happened to me.

It was weird, I went for 10 rounds and then collapsed 5-10 minutes after the fight. When I came round, I thought I’d been knocked out. It was where I took so many shots and then the adrenaline ran out.

Is there anything you wish you or the referee had done differently?
No, no. A lot of people were saying about the referee, but I know him, he’d refereed a few of my fights. And he knew I come on strong in the later rounds. So when I watch the fight back, every time he threw a combination at me, I threw something back. I’d acknowledge it or say something to him. So it wasn’t like I was getting pounded and not throwing anything back. So the referee thought, there was no point in the fight where it should be called off. He said only in the 7th round he stopped for a minute, […] you know, it’s in hindsight.

If we’d have went 12 rounds, people would have been saying it was a great fight. Because I went into a coma, people were saying the referee should have stopped it, [my trainer] Gary Lockett should have stopped it. Gary Lockett knows me better than anyone. He knows I’m tough, and we were still having a bit of banter in the corner. So I was still there and still did it. I can’t remember the stuff I was saying, but Gary said ‘you were talking to me the whole time, and you were fine’. He couldn’t find a point where he should have pulled me out. So no, I wouldn’t change anything

And you still finished with a pretty good record overall.
Yeah, it was all right. I fought some big names, I was the sort of fighter who wouldn’t say no to a fight. Unfortunately there’s not too many fighters like that out there anymore. They all want to have a real one-sided fight—I like a competitive fight, and it’s a shame not a lot more people are like that. It’s not necessarily the fighters—it’s the promoters, the trainers, the managers—they’re looking after the lads and trying to make as much money as they can. It’s more a business now than a sport, unfortunately.

What do you see looking ahead for Chris Eubank, Jr? I know you said you were a bit unhappy with how the Eubanks had behaved after the fight.
I’m bored of talking about the Eubanks now. Fair play to him, you know. People are saying I’m bitter because I’ve lost, but I’ve lost four times and I’ve never been bitter when I lose. Even when I should have won in Ukraine, I never got bitter. I wasn’t annoyed with him when I woke up—I wanted him to come and see me. But when my family told me what they’d done, trying to soak up all the media attention, I just didn’t agree with it. But ultimately I didn’t expect a lot different from them. It’s just the Eubanks, it’s what they do.

You’re quite friendly with Billy Joe Saunders, right? What do you think about him and Golovkin?
I really rate Billy Joe. He’s one of the best technical middleweight boxers in the world. He has a great pedigree, very slippery. I think Golovkin will struggle with him, as long as Billy Joe trains very hard, and I know he will—to keep fit for 15 rounds. He’ll have to stay on his feet and keep away from Golovkin. I think Billy Joe would give Golovkin a good test. Some say Billy Joe will get knocked out, but I don’t think that’s the case. I think it’d be a very good fight.