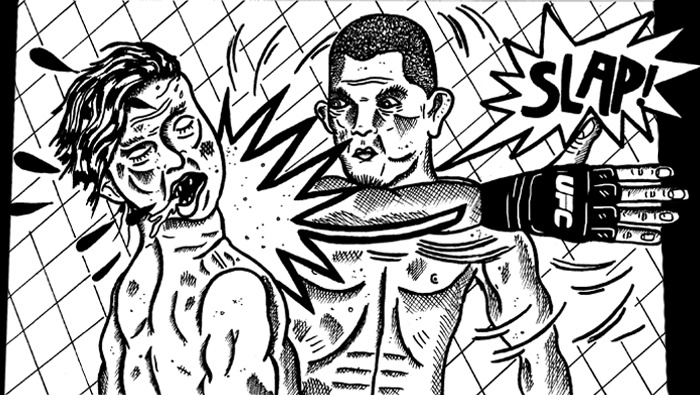 Amid all the hype and anticipation for Nate Diaz's meeting with featherweight champion Conor McGregor, one question towered over all others. “Will Nate slap him?” As McGregor poured on the pressure and the power in the first round and Diaz turned with terrific blows, throwing his palm across McGregor's chops each time, the question then became an incredulous, “how can he slap?!” To a fight fan it might seem like going to a duel with a wiffle bat instead of a sword. A slap is considered to be a non-threat—if you want to hurt someone, they say, you should ball up your fist and hit them like a man. But there is a lot more to slapping a fool than just slapping a fool...

The Stockton Slap has become part of the Diaz lore. Layer after layer of quotable meme from “wolf tickets” to “don't be scared, homie” to “209 wut?” The most famous reference to the slap came in Nick Diaz's 2011 interview with Ariel Helwani before his match with Paul Daley. The elder Diaz seemed anything but keen to do the interview and made it clear from the get go. When Helwani confronted him on this, Diaz retorted that he felt Helwani was an instigator and that where he came from, “people like that get slapped”.

But the Stockton Slap had been in action long before that. In arguably the biggest win of Nick Diaz's UFC tenure, the slap was turned against ferocious up-and-comer, and presumed future champion, Robbie Lawler. Diaz, being the “jiu jitsu man” in the match up surprised everyone by going toe-to-toe with Lawler on the feet, though he ate heavy counters when he stepped in. Instead, Diaz wanted to get Lawler coming in on him so that he could drop away and land the counter right hook which even then was his money punch. Clipping Lawler over the back of the head with this sent Lawler to a hand on the mat briefly in the first round.

But Diaz couldn't get the reckless aggression he wanted so he used the mean mug, the bicep flex, and finally the slap as an instigator. Notice how the slap, being longer and tighter than a right hook, sneaks through and stings Lawler. Lawler is happy to get punched in the head all day but he clearly lost his composure as he didn't react to the jab which came straight up the center after this and the scintillating over hand which sent him reeling to the fence. Notice that as soon as Lawler retaliates Diaz is very clearly looking for that drop away right hook over and over again:

Soon Diaz was in Lawler's head. Just as Nate Diaz got into Michael Johnson's by pointing at him every time he landed a good punch. The opponent just has to do something to send the message that they are winning the fight. Lawler drove in hard in the second round and walked straight onto the counter right hand which sent him to the mat for the KO.

And that is the other bonus of slapping someone in a sanctioned MMA bout. It's sort of like when Anderson Silva isn't able to do anything effective so he starts dropping his hands along the fence. There are still a shocking number of fans who make the connection between “clowning” (a word which every fan and pundit should stop using immediately) and dominating the fight. When Carlos Condit came out and circled Diaz for five rounds in a fight which remains controversial to this day, Diaz mean mugged into overdrive and slapped the cautious Condit around his guard. There are still a shocking number of fans who will use the slap as evidence of how in control Diaz was in that bout. What is worse, a lot of judges will still be swayed by a fighter using these and other "look how hard I'm winning this round" moments in a round when they have done little of any note.

But hold on, the slap isn't just a stinging invitation to man up and fight. It can be every bit as effective as a punch under some circumstances and in most it is a great deal safer. Watch any Diaz fight and you will notice that the common factor between the boxing of both is that lean back right hand counter. Nick prefers to pressure and work the body, Nate prefers to outfight and counter, but that right hook is key to both. But rather than just wing it like Mark Hunt and wear themselves out every time they miss, both will lazily throw it out, often slapping with the inside of the hand. This is what is often termed "cuffing" in boxing.

Slap or punch, they both serve to break rhythm and, later on, balance.

Yes professional boxers, including the supposed greatest of all time, would slap all the time if they could get away with it.

There is a good argument to be made for hitting with the palm just for the safety of the fists. When you try to swing a hook in from slightly too far away—unless you over rotate to connect with the back of the knuckles—it is common to end up connecting with the "door knocker knuckles". Essentially hitting with the balled fingers, not an impact any puncher wants to throw any weight onto.

Even in straight hitting, many fighters in the no gloves era of "No Holds Barred" promotions found that they were hurting their hands on skulls and elbows. Plenty of the better punchers in that era opted to wear gloves even before they were made mandatory for just this reason. But open up the hand and bend it back to expose the palm, and you're taking a stack of tiny, easily breakable bones out of the way of the connection.

Igor Vovchanchyn is remembered as one of the hardest hitters that MMA has ever seen, but coming up in bareknuckle contests he quickly realized that accuracy was key. For his swings he'd use his palm or his wrist, and he would only throw his fists in well set up punches which he felt he had a decent chance of landing cleanly and safely. Even then, Vovchanchyn retired with a number of plates in his arm.

And Bas Rutten, being one of the few good strikers in Pancrase, will happily tell you about the merits of hitting with the palms. From the time he palm struck Masakatsu Funaki's nose across his face from above, to the upward palm strikes he used to damage Frank Shamrock while on one leg.

B.J. Penn used to uppercut with the same surface while on one leg, even with the option of throwing proper uppercuts with his gloved fists.

But even if you want to differentiate between slap and palm strike, a slap in the right place can be a dozen times more damaging than a punch. You can hammer fist an opponent in the side of the head from the top of half guard all day. But open up your hand and bring done a couple of slaps over their ear and you have a great chance of rupturing their eardrum. On the odd occasion these happen in boxing, the effects on a fighter's balance and the pain that he feels are immediately apparent. Shinya Aoki uses this all the time, Kazushi Sakuraba used it to open up a clingy Shibata, and Chael Sonnen famously used both hands to box Anderson Silva's ears while the latter clung to him so that he could not make distance to punch with venom.  Aoki in particular has used this technique with tremendous efficiency—despite being a desperately poor puncher, he can hurt fighters enough on the ground to force the openings he wants.

For the street application of this, check out the “You've been Tango'd” advertising campaign which was hastily pulled as children deafened each other for life with slaps around the ears in playgrounds across the U.K.

Then you get to the mysticism. Some martial arts believe that striking with the wide, flat palm causes shock which reverberates through the body or the organ being attacked. You will hear about vibrating palm in Chinese kung fu, some styles of Eksrima advocate slaps particularly to the kidneys for the same reasoning.

When you build your martial art around locker room horseplay.

At its best the slap is exactly what it looks like. It's a long, uncommitted flick of the hand with a heap of connotations attached to it. If you slap someone in a fight, you might have been doing nothing effective up to that point but suddenly the onus is on them to prove that they aren't going to just let that go unanswered. A slap is an invitation to put up or shut up. And that, along with Justin Bieber's Mayweather-trained assessment of Nate Diaz's style as "trash" has us all hoping that he truly is #SoonToBeSlapped. Diaz – Bieber at UFC 200, it's the only fight that makes sense.

Death of a Southpaw: How Conor McGregor Lost To Nate Diaz