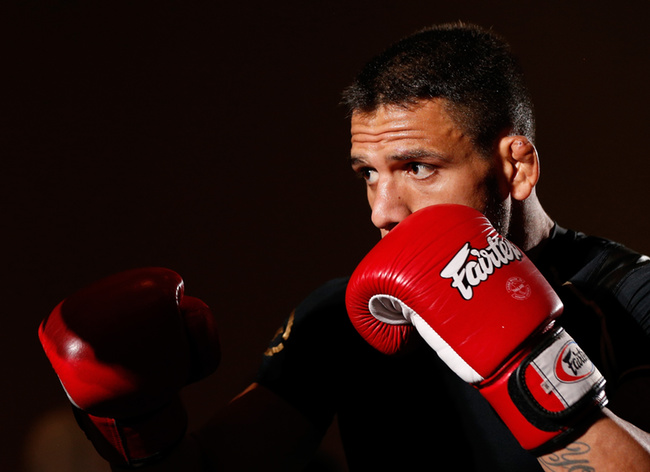 Rafael dos Anjos' shot at UFC gold has hardly been hotly anticipated. In fact, the feeling is that he is standing in for Khabib Nurmagomedov, the tremendous Dagestani wrestler who bested Dos Anjos in April 2014. It is Nurmagomedov who is though to bring the questions for which UFC lightweight champion, Anthony Pettis, may struggle to find answers.

And that is why Rafael dos Anjos is such a curiosity. He's almost forgotten in plain sight. If anyone can throw a spanner in the works of a long-term plan, it's an overlooked underdog.

Since arriving in the Ultimate Fighting Championship in 2008, Dos Anjos has taken part in an astonishing seventeen UFC bouts. Compare that to champion, Anthony Pettis' handful of UFC fights, and it seems weird to think that Pettis is a name familiar to even the most casual of MMA fans, while RDA seems to be coming into this contest as the unknown.

And you know what? It's my job to watch UFC events, and I'm still surprised as I look back through Dos Anjos' record to note how many of his fights I have seen but didn't remember until prompted. Compared to a standard UFC career, Dos Anjos has been around forever, and he's fought a murderer's row of opponents in the UFC's most stacked division. Yet seven years and seventeen fights later, Dos Anjos seems to finally be hitting his stride.

Rafael dos Anjos made his first appearance in the UFC back in 2008, while riding a nine fight winning streak. Against Jeremy Stephens, Dos Anjos seemed exactly as advertised, a one dimensional Jiu Jitsu fighter. Pulling his head straight back every time Stephens twitched, running himself dangerously close to the fence as he circled the ring, and shooting takedowns like this:

But as soon as Dos Anjos got a hold of Stephens, the fight shifted in the opposite direction. The two fighters were a class apart as Stephens attempted to survive as Dos Anjos crawled all over him. After two rounds of Stephens just surviving on the ground, Dos Anjos backed onto the fence, ate a Looney Tunes-esque uppercut, and was left on the wrong end of one of the most spectacular knockouts of the year.

Half a year later, Dos Anjos dropped a decision to UFC lightweight veteran, Tyson Griffin to bring his UFC record to 0-2. Taking a step down in competition Dos Anjos rebounded with a streak of three wins—Robert Emerson, Kyle Bradley, and Terry Etim—before meeting Clay Guida and suffering one of the weirdest finishes in MMA history.

In fairness to Guida, he looked as good as he ever had. He got the better of many of the exchanges of the feet and, in the course of it, injured Dos Anjos' jaw. Dos Anjos continued but got stuck on the bottom, attempting to endure the Shoulder of Justice as Clay Guida looked to pass his half guard. Eventually the pain became too much and we were treated to the bizarre sight of a fighter seemingly submitting to the force of Guida's legendary stalling tactic, shoulder strikes.

Another win and loss later and we were all becoming comfortable with the idea that Dos Anjos would forever be an also ran. A skilled and impressive fighter, and one of the best in the world at lightweight, but never really top ten material in that shark tank of a division.

But fighting, more than any other sport, has a weird way of misrepresenting a person's potential (just ask fellow UFC 185 fighter, Alistair Overeem). When we didn't think Dos Anjos had anything more to give, he suddenly built a streak of five wins over legitimate competition. And this wasn't just one of those weird coincidences, or meeting five guys he happened to be a horrible stylistic match up for, there was genuine improvement in Dos Anjos' game.

His footwork had improved, he had stopped pulling back at the waist, he began moving his head on the way in and on the way out. Where before he had used his kicks as his only weapon on the feet, now he built off of the expectation of them. And most of all, he didn't seem scared to get hit—as he had early on—nor overly eager to brawl, as had got him into trouble against Guida.

Against Donald Cerrone, Dos Anjos looked measured but sprinkled in the aggression when necessary. Perhaps one of Dos Anjos' most memorable moments came as he used a simple low-high to catch the lightweight striking savant clean. Notice that Cerrone's lead hand goes to Dos Anjos' to check it, but as Dos Anjos lands the left hook to the body, he swings his right hand low to escape Cerrone's hand fighting dominance. Cerrone's lead hand remains outstretched as Dos Anjos' lead hook circles in behind it.

The pinnacle of Dos Anjos' career so far was undoubtedly when he scored a knockout win over former UFC lightweight champion, Benson Henderson. Both men looked crisp with their striking but when RDA got Henderosn to the fence, he took a page out of Anthony Pettis' book by attacking Henderson with a jumping knee.

If you review Henderson's first bout with Pettis, Pettis is constantly trying to place Henderson on the fence, then he will wait for Henderson to react. Often Henderson would try to fight his way out or shoot a takedown, and Pettis would attempt to hit him with a counter strike.

RDA's knee looked solid, and as Henderson jumped back up out of his takedown attempt, he was hit with a left hook that floored him. The stoppage might have seemed a little early, but you can't fault how Dos Anjos got there, he'd looked remarkably sharp on the feet.

Dos Anjos' most recent fight was against the returning Nate Diaz, and frankly that is starting to become an easy fight for men who can grapple, low kick, and understand how move their feet. It was a one-sided beatdown as Diaz continued his grand tradition of getting knocked over by low kicks and still refusing to check them.

And that's how we got here. It took seven years and seventeen fights, and it never, ever seemed likely, but Rafael dos Anjos is fighting for the UFC lightweight title. So now to the important question.

Does He Have a Chance?

Of course he does. But as is often the case in these title fights, it is more about if he and his team know how to best utilize his skills. If he intends to stand and trade kicks with Anthony Pettis? Expect him to have a long night unless he's doing something clever to set them up. But if he gets to the fence and begins his smothering clinch and ground work? He could very well succeed where Gilbert Melendez failed.

Forcing a fighter to carry your weight is an excellent strategy, especially against someone like Pettis who is so full of vim and vigour in the early going. But leaning on someone against the fence—which is holding them up—and doing little else isn't going to tire out a world-class fighter too quickly. It's the work rate that Randy Couture, Cain Velasquez, Jon Jones and other great fence fighters showed which melted their opponents. “Wall 'n' Stall” just ain't going to cut it against the elite. They need to be panicked and forced to struggle for a way out. Leaning on them doesn't accomplish that.

Where Melendez did little except hold, Dos Anjos has shown to be extremely active along the fence, easily getting the better of Jeremy Stephens—who more than held his own in similar exchanges against Pettis—and plenty of others.

Where Dos Anjos might see trouble is out in the open. His tendency to back straight up when his opponent comes at him plays into the low kicking game. Donald Cerrone, Benson Henderson and others have sent him stumbling to the mat with low kicks as he retreats. That great Machida weakness (and really the weakness of anyone who retreats ever) is that the trailing leg will always be the last thing to leave the opponent's striking range, making it a very attractive target. But let's not forget that Pettis has suffered from the same issues. In their first match, Benson Henderson was very effective in backing Pettis up with punches which had little intention of landing, only to kick out Pettis' lead leg.

Dos Anjos leads with kicks all the time. He doesn't often set them up, which is great against most fighters, but against Pettis that might not cut it. Pettis has shown the best ringcraft of any lightweight and he understands that against a strong kicker—like Henderson or Cerrone—he wants to push into them so they can't kick effectively (a la Fedor versus Cro Cop), or be too far away for them to kick at all. Dos Anjos' tendency to back straight up combined with Pettis' understanding of ring craft may well lead to some hairy moments along the fence for Dos Anjos. And jumping, fence-assisted techniques aside, we know that's where Pettis loves to fight.

A final thought about backing straight up—Pettis' range is greater than most strong kickers in MMA. We talked about it at length in Secrets of the Pettis Kick, but Pretty Tony wheels his hips all the way around to face his left side and kicks to directly in front of him, to 12 o'clock. Many kickers in MMA will look to connect their kick at about 1 or 2 o'clock and drive through because that's how they are comfortable in kicking the pads. Pettis' deceptively long kick, with wicked fast lead foot pivot straight out of a long stance to hide his intentions, has all the potential to catch Dos Anjos as he's retreating, thinking he's out of range.

Rafael dos Anjos has come a long way, and you shouldn't let anyone fool you into thinking he doesn't have a chance. If he can put the pace on Pettis in his own way—with his tremendous pure grappling in the clinch and on the ground, he stands more than a good chance of winning. Even if he's not able to, the tools necessary to best Pettis already exist in plenty of fighters and with a few additional considerations they could be made into lightweight king slayers, but we'll save that for Killing the King: Anthony Pettis.

In the meantime, tune in to UFC 185, watch maybe the best pay-per-view of the year so far, and then get back here for a recap.

Anthony Pettis's Next Title Defense Will Be Against Rafael Dos Anjos