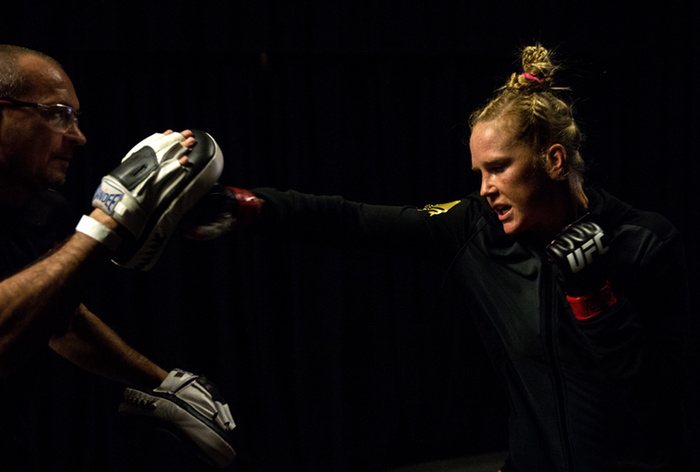 Brace yourselves because this fight could be a stinker. Gasp! What? Are you bored of top-notch strikers, Jack? Are you part of the Just Bleed crew now, Jack? Now you're big time you don't have time to care about the low flying, technical bouts, Jack? Calm thine bosoms. This fight, like the 'prime Lyoto' versus 'prime Anderson' dream fight which you don't actually want to see after thinking about it, runs the risk of being a stinker because of the conservative nature and striking style of both fighters. Sure, we could see sharp movement based boxing from Holm with breaks of shit hot Muay Thai from Shevchenko and a dozen changes of momentum... or we could see a staring match punctuated by a couple of kicks to secure each round for one of the fighters.

When Holly Holm obliterated Ronda Rousey in two rounds and became the women's champion, her lackluster performances in the UFC up to that point were retconned as her 'holding back' so that she wouldn't tip off the top fighters to her game. That is just silly. Holm looked sublime against Ronda Rousey because she was the perfect foil for Rousey. Rousey's sloppy boxing, all out aggression, and stubbornness in the face of being hit in the face made her a mark for Holm's counter punching game. Her advances on a straight line and inability to cut the ring matched up perfectly with the lateral movement Holm used throughout her boxing career. And Rousey's inability to shoot a takedown, relying instead on bullrushing her way to the clinch through punches, meant Holm didn't have to worry about level changes. The counters were there for Holm, she never had to open herself up, and she looked unbeatable as a result. Though take that with a pinch of salt because the man closest to Rousey, Edmund of House Targaryan, stands by the idea that she just got caught.

Compare that to Holm's fight with Miesha Tate. Many were claiming that Tate's striking was much improved, but her bout with Nunes showed her defense to be as porous as ever. What Tate did so well in the Holm fight was not run in guns blazing. Knowing that Tate wanted to shoot in low, Holm was extremely reluctant to throw meaningful strikes and Tate was able to get in on her hips when Holm did open up.

Meanwhile, Valentina Shevchenko won a lot of fans coming in to the UFC on short notice against Sarah Kaufmann and getting the better of the long time contender. That was the first I had seen of her in MMA and I know that I was impressed. Her next fight she took on Amanda Nunes (now bantamweight champion) and I found myself saying “When's Shevchenko going to open up on this lass”? Going back and watching Shevchenko's last three fights—when she wasn't fighting no namers in Peru and Russia—it becomes clear that Shevchenko is a painfully slow starter. She'll clip off two or three economical, fast, snappy strikes and you will 'oo' and 'ah' until you realize that that's it for the next two minutes. I would suggest that you actively avoid ever watching her fight with Jan Finney except as an exercise in resisting torture.

In fact it's not just the start, she fights the entire bout with no urgency at all. The closest we came to seeing Shevchenko with a little fire under her was after she had spent a round being crushed underneath the bigger Amanda Nunes and was two rounds down. And this is what is maddening, she doesn't seem to tire and third round, down-on-the-cards Shevchenko is something wonderful to behold.

Shevchenko catches Nunes ducking with the left hand, pulls away from the counter onto an angle and comes back in with another left hand as a tired Nunes ducks again.

But then the Nunes fight shows what might be the reason for Shevchenko's inactivity—while she was exceptionally accurate with kicks to the body and legs, landing 9 of 12 clean, it was a caught kick in the second round which saw her put on her back where she took a beating on the bottom.

Shevchenko deals largely in the linear in small phasic movements, Holm deals in lateral movement and using the entire cage. No surprises there, boxer versus kickboxer. Holm provides an interesting question on the feet because much of Shevchenko's game is parking up just on the end of her opponent's reach and either retracting her lead leg or swaying back with a counter right hook. Unfortunately when she suffers from a reach disadvantage, as she often does at bantamweight, Shevchenko misses about five times as many of these hooks as she lands. Holm is unlikely to stand in front of her for long and just agree to trade blows. Shevchenko's best strikes are her left round kick to the body, her counter right hook, and a left superman punch. Holm's best strikes are her left straights, a nice pivoting check hook, and her kicks when she can get to a good angle. Except wait a second, they're both southpaws which means ALL CHANGE. The angles change, any advantage a southpaw might gain from being unusual to orthodox opponents is lost and it becomes more like a match up between two orthodox fighters.

For Holm the gameplan should not to park up in front of Shevchenko and allow her a measured pace. Holm should circle the octagon and slam her favourite low line kicks into the front of Shevchenko's leg whenever she follows. The old Anderson Silva / Jon Jones strategy—the opponent can't just stand still after getting kicked a few times, they'll lose the round if they do nothing. As soon as Shevchenko gets aggressive, look for the counter left hands and—probably more important in a southpaw versus southpaw engagement—counter jabs and hooks.

The low line oblique kick lines up much easier against an opponent in the same stance like the southpaw Shevchenko.

For Shevchenko the same advice applies here as to any fight she takes—throw more strikes! She doesn't tire out so there's no sense conserving herself. Though this is Shevchenko's first five round fight so we might actually see her warm up midway through it. Chasing Holm towards the fence and punting her trailing leg when she breaks the line to start circling out would be a solid idea: it's something everyone should be attempting against laterally mobile opponents anyway. A low connection rate in the early rounds on low kicks can suddenly shoot up as the rounds wear on and the opponent's feet become slower—committing to the kicks early hurries it along.

While Holm was good at avoiding the clinch against Rousey, she has fallen into it more often while charging in with that same combination which always sees Carlos Condit run in on top of his man and give up his reach by accident—straight, lead uppercut, straight.

Just as Miesha Tate's greatest weapon against Holm was inactivity—inviting the counter fighter to lead and then grabbing a hold of her as she did—Shevchenko could benefit from cautiously following Holm and inviting the punches. Should Shevchenko want to stop Holm counter punching so effectively a large amount of feints should go a good way towards getting Holm's finger off the trigger.

Even Rousey's clinches came off of Holm stepping in to blast her.

If she can duck in on a clinch Shevchenko could have some success against Holm. Despite seeming undersized for the division, Shevchenko threw around Sarah Kaufmann, she did struggle with the outside trips of the stronger Nunes, however and really suffered when she was trapped on the bottom. Though Holm is also an enormous bantamweight and her awareness and defense from the clinch was absolutely on point against Ronda Rousey. Though a judoka's clinch and a nak muay's clinch are different animals, perhaps Shevchenko could get some effective strikes going from the clinch. Many of Shevchenko's best strikes are knees in a clinch or mid-break.

One final interesting point, Valentina Shevchenko's love of spinning techniques might help her in this bout. Shevchenko's turning techniques are frequent and often inaccurate. Something interesting about them is that rather than stepping deep enough across herself to line up the hips and turn into the kick or backfist, she often pivots like a ballerina! Perhaps connected to her life long love of dancing, notice how she spots with her head coming around first and how she doesn't really step across herself deep enough to line up her hips

The first is something every fighter who likes turning techniques can learn from—too many fighters are happy to kick blind—the second is not. Holm being a fellow southpaw means that where the wheel kicks and backfists would have to approach through the shoulder of an orthodox fighter, they will now come in on Holm's rear hand side without the durable surface of the shoulder and back getting in the way. The straight back kicks will also be easier to line up with the body as Holm circles away to her left so much of the time. When a fighter is consistently circling past your lead leg you don't need to step across yourself at all, you simply pivot and back kick to what was two o'clock.

The ramifications of this fight on the division could be substantial... or they couldn't because who knows what the hell is going to happen to the women's bantamweight division in the next few months. With that said, these are probably the two most technically sound strikers in the division and well worth your time. Be ready for a slow burner with moments of excitement, and be pleasantly surprised if a five round fight suddenly brings out the best in these slow starters. If anything good happens, get back here Monday and we'll talk about it. If it doesn't? There's still Barboza versus Melendez which is a match up worth the price of admission on its own.

How Bellator London Taught Me That I Don't Care About Knockouts

The Fall of Samart: One Fight, Two Stories