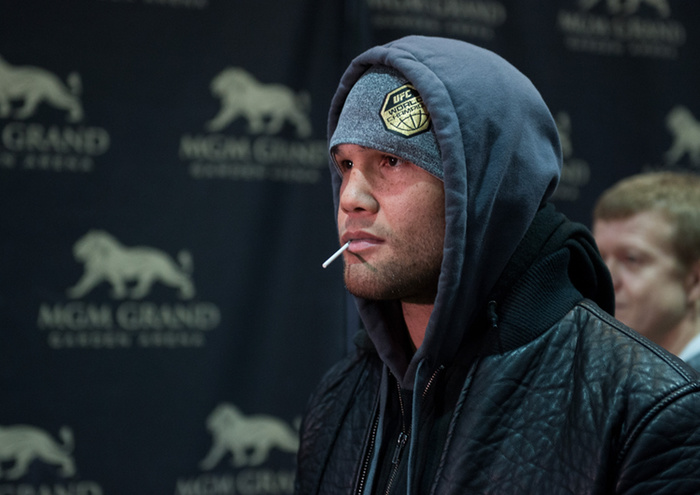 The welterweight division without Georges St-Pierre has become a strange place. The champion, Robbie Lawler, has defended his title twice and is undefeated in his last five bouts but has also won controversial split decisions in two of his last three fights. The remaining bout was a back and forth war which he won with a knockout in the fifth round. The crown teeters on the head of Lawler and any moment someone could rise up to snatch it. That is what makes the division so exciting now and what the division was missing through St-Pierre's reign. Strangely though, despite the welterweight division being one of the deepest pools of talent in MMA, Carlos Condit got the last title shot seemingly for time served: his record showed  a 2-3 slide going back to 2012. Yet Condit turned and surpassed all expectations, taking the champion to a very hotly debated split decision. Welterweight is a weird and wonderful place in the wake of St-Pierre and doubtless that will carry on into this weekend's title fight between Robbie Lawler and Tyron Woodley.

Woodley isn't exactly a fan favorite. He is another in the long line of wrestlers with one great punch but he tends to breathe heavy by the end of the second round and often refuses to shoot a takedown unless it's entirely necessary. So far he sounds exactly like Dan Henderson, right? Except Dan Henderson's body is a hundred and forty eight years old and his back is crocked so fans can forgive him for never going to his wrestling. Most are just ecstatic when he doesn't get brutally beaten nowadays. What's more, even Dan Henderson has a couple of reliable set ups to his right hand, Woodley just throws his naked in answer to anything he sees from the opponent.

To the extent that Woodley does set up his right hand, it is usually that stutter-step double shift that he caught Jay Hieron with but has struggled to connect on anyone else.

Or it is that Dagestani back step, putting his own back foot to the fence and firing the right hand as soon as his opponent steps in on him. Using poor ring position—by choice or by habit—as a set up.

Woodley did knock out Dong Hyun Kim who finds one unorthodox move he likes and then throws it so many times as to become completely predictable. First it was the crane kick, then it was the spinning backfist. It's hard to credit Woodley's elite striking chops for this one, as beautiful as it was.

While Woodley's TKO victory over Carlos Condit is overshadowed by Condit's unfortunate knee injury you need only review the fight footage to see that Woodley was lighting Condit up with right hands. Simple catch-and-pitch counters.

After Condit attacked Woodley along the fence, usually with a kick, Woodley would return with the right hand and snap Condit's head around. Yet Woodley struggled on the feet against Jake Shields of all people. It makes no sense. Well, it makes no sense if you think of 'striking' as an attribute and of Condit's striking game being at a much higher level than Shields'. If you look at what Shields and Condit actually did, you'll see why one was getting tagged regularly and the other had almost no trouble at all in a fight so mundane that the UFC production crew began experimenting with panning overhead shots to break up the monotony.

Shields, while a skittish striker, was always cognizant of the right hand and by stiff arming, keeping his lead shoulder high, or just by being too far away after he kicked he was rarely in danger. Shields' focus on inside low kicks as Woodley stepped wide for the right swing (knocking his basing leg out from under him as he transferred his weight onto it) and his use of a jab also meant that he got to the mark quicker and maintained distance well. But Condit, by stepping right on top of Woodley with his attacks and not returning to a defensive position sharply enough, got blasted time and time again.

The advantage of keeping the attacking side hand out in front while kicking.

Now Rory MacDonald's handling of Woodley was masterful. He'd go to the fence with Woodley, but not pounce on him and eat the right hand. Instead MacDonald would pick at Woodley with jabs and long kicks. R-Mac was always ready to get down behind his lead shoulder and place a solid structure in the path of Woodley's right hand, rather than relying on having his left hand up and ready.

That being said, Woodley's willingness to just throw his right hand without set up or second guessing himself did pay dividends against the usually very smooth striker, Kelvin Gastelum. Each time the southpaw stepped in to build a combination, one big right hand came down the pipe and broke his combo.

It is hard to see Tyron Woodley picking up a victory over the UFC welterweight champion with just that one big punch and a solid wrestling pedigree. One skill which Woodley has, but which he fails to incorporate into his larger game, is that he can thrown exceptionally hard and fast low kicks. We're talking throw-the-other-guy-off-his-feet low kicks. It just so happens that Robbie Lawler has a lot of difficulty with low kicks. Not just against Melvin Manhoef (because nobody wants to get kicked by The Melvinous One) but against Carlos Condit and even Johny Hendricks. In the first bout between Lawler and Hendricks, Hendricks' low kicks made the difference as he tacked them on the end of combinations with his hands. In fact he landed twenty five in the opening round in the rematch, but Lawler's commitment to body blows in that fight quickly sucked the wind from Hendricks.

When your leg bends in any direction other than with the knee joint you want to consider checking the next kick.

Lawler looked to evade the punches with his head movement and shoulder rolls, waiting to come back with his booming counters, but with his head off center he was completely out of position to check or take the low kicks effectively. Often Lawler won't even attempt to check kicks until they are visibly affecting his movement. Sure, there's a neat clip or two of Lawler jumping over a low kick or jumping to check a kick, but those are labor intensive 'sometimes moves', not the sort of thing a fighter can actually rely on consistently. If Woodley can show a few punches before his low kicks he can reap exactly the same benefits as Hendricks who certainly wasn't known as a top notch kicker before or even after the Lawler fights.

Woodley's right hand heavy style might well be a troubling match up for Lawler. The champ is a southpaw after all, against whom the path will be clearer for rear hand leads. Kelvin Gastelum had trouble with the frequency and power of Woodley's right hands even if they weren't well hidden or coming in from unorthodox angles. What is concerning is Woodley's dangling left hand and protruding face when he throws his right hand and his laziness in recovering his guard. As Lawler's favorite counter punch has always been the southpaw right hook Woodley might want to have spent the time in camp working on keeping that left hand up and closing the door with the left hook or jab at every opportunity.

Woodley connects his right hand, fails to recover and is caught by a returning right hand from Condit.

Another trick which Woodley could benefit from is commitment to level changes into uppercuts and overhands. Lawler's takedown defense has looked on point in recent years and he's even harder to keep down—Johny Hendricks was reduced to clinging to his legs and accomplishing nothing in both of their bouts. Lawler drops his hips hard on opponents who shoot on him and is constantly ready to do so—a bit of Justin Gaethje/Chad Mendes faked shot magic could go a long way towards hurting Lawler and work the same way as feints do with counter strikers—they will make him hold off longer before deciding to drop his weight and this in turn will make getting the takedowns easier.

For Lawler? He has been working on darting in with the southpaw one-two, with the jab coming perfectly inside his opponent's lead hand. A more mobile Lawler was visible against MacDonald and Condit but perhaps he could benefit from going back to the static counter punching style he used against Hendricks.

The more agile, straight punching Lawler that turned up against MacDonald was a nice surprise.

Woodley leaves himself so open after his punches and rarely if ever throws in convincing combinations. As Woodley has a history of breathing hard by the end of the second round, slowing in the third, and has never been into the championship rounds some more of Lawler's body work could work wonders. The triangle kick he introduced in the second Hendricks match was a beauty, and the elbows to the kidney when fighting off attacks on his hips along the fence are a unique little Lawlerism which look agonizing on film.

Perhaps we have painted a pessimistic picture of Woodley's chances in this match. He is a great wrestler and he does hit really hard, but that's far from unique in modern mixed martial arts. He hasn't shown much subtlety or wile to support his talents and fundamentals yet.  But Lawler, while seeming to grow from fight to fight as a striker, has always seemed within a hairs breadth of losing in his last three bouts.  Even if it isn't the most intriguing tactical fight on paper, you would be mad to miss it with how welterweight title fights have been unfolding over the last couple of years.