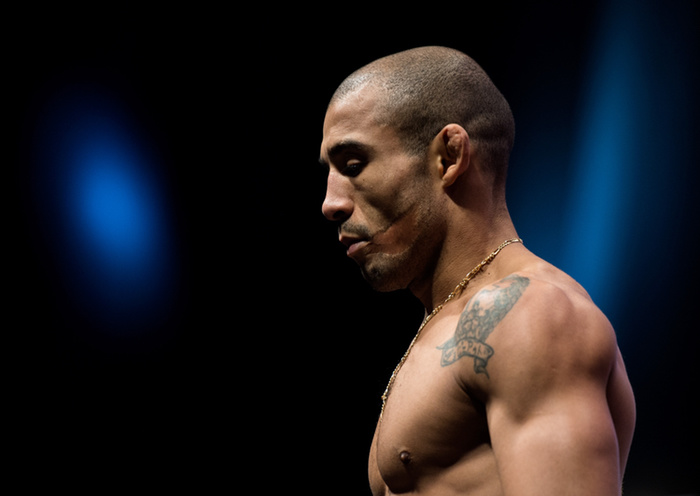 It has been seven months since Jose Aldo was crisply starched at the hands of Conor McGregor. His last victory came a full year before that in a back and forth war with Chad Mendes. Mendes made the UFC's only featherweight champion look less clinical and more hittable than ever in their October 2015 barnburner. Then, after a year out of the ring, hours of bitter back and forth in the media, and another postponement, Aldo entered the cage with McGregor only to immediately rush himself onto the counter left hand that the Irishman had been hanging out for everyone he has met since his Cage Warriors days. Reach back to the start of 2015 though, perhaps to February when he paralyzed a timid Ricardo Lamas with technical superiority in every area of the game, it seemed unthinkable that we would reach this point. Doubting Aldo? Doubting Aldo.

Aldo's opponent, Frankie Edgar has gone from strength to strength and seems to have reached the peak of his powers. Where many felt that Edgar cutting down to featherweight was the same old sign of a fighter losing a step but not wanting to pack it in yet, the former lightweight champion has surprised everyone by reaching new highs in technical ability. On a run of five wins dating back to that loss to Aldo—four of them over top featherweights—Edgar has finished both Cub Swanson and Chad Mendes, with a masterclass against Urijah Faber in between. Edgar has never looked better, he's the man the fans want to fight McGregor, and he has the opportunity to avenge his most recent loss at UFC 200. So what are his chances?

For all the hype surrounding Frankie Edgar's footwork, Aldo's feet were the neater in their first meeting. Edgar moves around like a stoat on the outside, bobbling left to right with little side steps, but he always attacks on a straight line. This meant that every time Edgar started stepping in, Aldo could snap out a crisp jab and bust up the challenger's face.

Edgar's straight line charges were made transparent by his reluctance to use his usual level changes. Edgar normally rushes with punches which go head, body, head and the body shots either set up work upstairs or takedown attempts. His liberal use of body jabs also aids this. Against B.J. Penn (in the two fights which mattered), Edgar threw a great many dipping jabs to the chest and body, then he would slam out a jab with an open palm into Penn's shoulder and with the other hand pick up Edgar's lead leg for that signature Edgar running takedown attempt.

The last person in the world you want to level change against, though, is Jose Aldo. The man is a good striker, but he does his best work against wrestlers. For this reason I have always termed him an 'anti-wrestler'. He's a master of the limp leg, allowing opponents to pick up the single only to turn his knee down and kick out of it.

Almost all of Edgar's takedown attempts came to nothing.

But more importantly Aldo's best finishes have come as he intercepts his man changing levels to go after his hips. Manny Gamburyan suffered the uppercut. Chad Mendes and Mike Brown ate hard knees in going for takedowns. And poor Rolando Perez, probably serving as the deterrent to Edgar's level changes, ate a knee while flicking out a body jab.

So Edgar rushed in on straight lines and Aldo gave ground.

Aldo began to land his best shots on the pivot. His use of a clockwise pivot was beautiful through the fight as he broke Edgar's line of attack and connected lead hooks as he did so. This pivoting off line was the heart of this fight and the reason that Edgar's first three rounds turned out so poorly.

But as readers will know, any strategy relying heavily on fast retreat or turns means that the fighter's feet are not in position to check low kicks. Edgar's greatest success throughout the bout was with low kicks as Aldo retreated or pivoted: when his lead leg was either light or left out as a turning point respectively.

Edgar even found a chance to snatch at that lead leg on the pivot and run through his favorite pick up into the back bodylock, though keeping Aldo down has always been a tough task.

While Edgar's head movement was absent on his forward rushes without the level changes, he still slipped well on the counter as he always has. The short slipping hooks and slight giving of ground to right hand returns have always served Edgar well in even scraps with bigger men. Combined with Aldo's tendency to reach, Aldo wasn't half as successful when could be convinced to come forwards and be proactive rather than reactive.

All of that footwork on Aldo's part took effort.  By the fourth and fifth rounds Aldo had tired even from getting the better of Edgar and was swinging wide at feints. This was when Edgar began to have success on the lead, but it would not be sound fight strategy for Edgar's team to look at the first fight and simply say “we need to pour it on harder, sooner”. This would not prevent Edgar from getting jabbed up again.

For Aldo, he should resolutely stick to what he did in the first fight. His jab was proving more than a nuisance to Edgar each time the latter stepped in. The fight was close though and it would be good to see Aldo attempt to land some more damaging strikes. Perhaps more low kicks out at range as he did so effectively in the first round, but the intercepting knees to the midriff which winded Mike Brown could be an excellent weapon against an opponent whom Aldo seems so confident in shucking off and standing up from underneath in the early going. If there's one thing I'd love to see more from Aldo, it is offensive wrestling. If he could put Edgar on his back early and score some good elbows he could take the rounds and deny Edgar the opportunity to push the pace, conserving his legs for the later rounds.

From Edgar I would like to see a commitment to get Aldo to lead. Conor McGregor's performance might have been overshadowed by Aldo's lunging face first onto the counter, but the first three strikes of the bout were exactly the sort to annoy Aldo. The side kick to the lead leg is an excellent weapon to convince an opponent to get to work stepping in so that they don't have to suffer another. For Edgar the right footed oblique kick could work wonders in convincing Aldo to chase him and offer him the counters he wants.

But that is not to say Edgar should stall Aldo into moving first. That is a strategy you can only really rely on if you are the champion. Edgar should return to the technique which undoubtedly found the most success in the first fight: the low kick. Convincing Aldo to give ground or pivot and then slamming into the back of his lead leg with the round kick is a great means of piling up the points, putting in some damage, improving the chances of getting the fight to the mat later on, and slowing down the champions feet. If Aldo didn't want to get on the lead after that, Edgar should be more than happy just reaping those benefits for five rounds rather than trying to rush in with punches as Aldo eludes him.  While Urijah Faber is nowhere near the rounded striker that Aldo is, Edgar's performance against Faber was encouraging as he feinted reactions out of Faber and slammed in low kicks as Faber looked to counter punch, then built up to overhands and takedowns off of these reactions.

One thing worth keeping an eye on in this fight is whether Aldo does still lead with his face on his right hands. When Renan Barao suffered a complete dismantling at the hands of T. J. Dillashaw he changed very little and his team seemed to have failed to prepare him for the exact same issues. He bit on feints and failed to deal with a mobile opponent. The work of both Claudia Gadelha and Jose Aldo in their rematches this week will tell us a lot about the Nova Unaio veterans' abilities to patch holes rather than just build on what they already have.

Thompson, Cerrone and Calderwood: The Best of Karate and Muay Thai in MMA