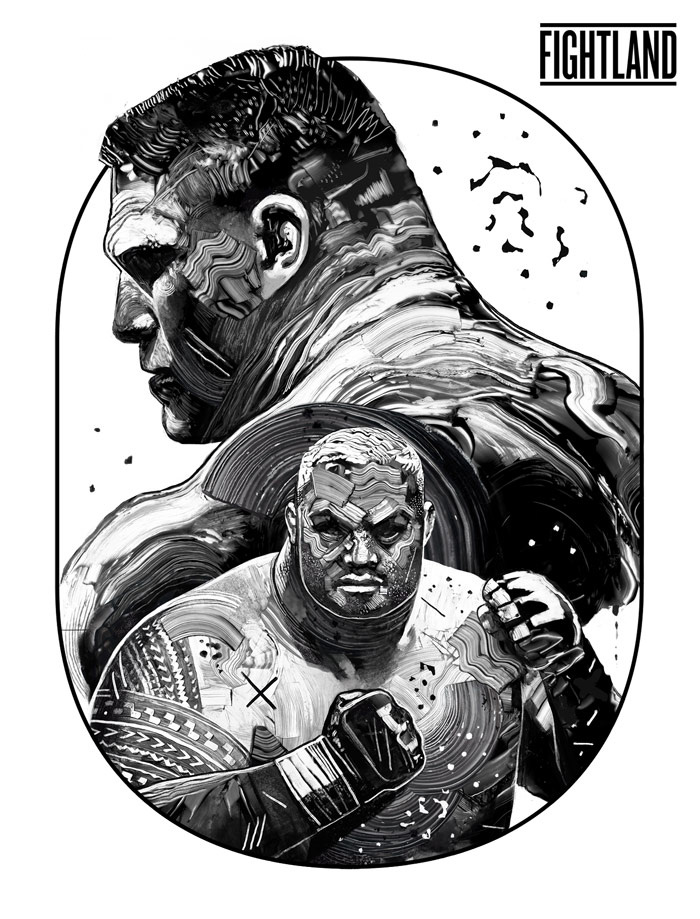 An eleventh hour meeting of the Fertita-White brain trust in UFC's Las Vegas offices. Lorenzo Fertita is performing kettlebell swings while crab walking on a stairmaster. Dana White is angrily responding to the kind of tweets which really shouldn't bother a multi millionaire. Frank is doing whatever Frank is famous for. They await the call from Joe Silva to hear whether or not he has saved UFC 200. Damn that Conor McGregor for forcing their hand. Why couldn't he just turn up and read the usual list of one-liners he writes on the flight over? It's not that hard. But here they are all the same: desperately seeking a big name fight for what should be the biggest card since UFC 100.

The phone blurts out a single ring before it is snatched to White's ear: it's Silva, St-Pierre said he can't be ready in time. Despair descends on the meeting room like it's being pumped in through the sprinklers. Lorenzo is now tweeting unambiguous come ons to Octagon girls while White is gambling away thousands on his phone in hands of online blackjack. Frank is firing non-union labor. Frank suggests one more fight for Chuck Liddell, Frank insists that Chuck definitely had 'that look in his eyes' last time he saw him and White begs him not to mention the idea again. A moment of clarity dawns on Lorenzo. He asks if White still has 'the card'. White goes into his wallet and retrieves a crumpled square of cardboard with a pager number crudely etched onto it in what looks like deer blood. They dial the number and wait. Half an hour later the phone rings and the three rush to it. A male voice erupts through the speaker: he says that he has heard the UFC is in some trouble and that he is calling them tonight as the representative for his client, Buh-rock Lesnar.

At least this is how I like to imagine that we got to this stage. Brock Lesnar is back, somehow, and we don't know how many backroom favors had to be called in to get him here. All we know is that he is here for one night only and he's diving in at the deep end by taking on the Super Samoan, Mark Hunt. He could get starched hilariously or pull off the greatest microphone drop in UFC history by coming back, smashing a top ten heavyweight after four and a half years away from competition, and walking off to pro wrestling once again. Let us consider the match up.

Let us start by saying that lay off or no lay off, this is the heavyweight division. A loss of cardio or technical ability is not going to be nearly as detrimental as it would in one of the more competitive weight classes. More importantly we have no idea what Lesnar has been doing in the half decade since he last competed. He lives an isolated life style out on his farm and has one of the most favorable contracts in WWE history: turning up occasionally to look scary, and turning up even less often to actively wrestle. This is not a C.M. Punk type individual, burning out his joints with hundreds of matches a year to where the life of a professional fighter might actually be more forgiving on his body.

While Lesnar was a UFC champion, things worked out quite nicely for him to get there. He was given a fair few favorable match ups. Frank Mir was never an especially gifted wrestler and had a tendency to get complacent on his back and then get stuck there. Heath Herring's entire ground game was stuck in the 1990s as he turtled and rolled for kneebars: the style which gave many old school heavyweights trouble but got him obliterated by controlling ground and pounders like Fedor Emelianenko and Lesnar.

Frankly the toughest test Lesnar faced up until he fought Shane Carwin was Randy Couture, a forty-five year old light heavyweight who had been away from the game for almost two years and under any other circumstances would have been stripped of his belt.

Lesnar's move to stiffer competition coincided with his health issues so sadly we don't know how much of his decline was related to each factor. Lesnar's most impressive performance probably against Shane Carwin, wherein Lesnar showed that despite being a big man and playing the part of a bully in each fight, he could grit his teeth and survive. After Carwin gassed out waiting on a stoppage that never came in the first round, Lesnar immediately took the challenger down and submitted him in the second.

Lesnar's best performance as a technician was in flattening out Frank Mir in their second bout. Using a stockade grip around the neck and into Mir's far armpit, Lesnar made Mir completely helpless against his short, powerful blows.

The grip is the same as for the old school 'stockade' neck crank, but serves as a controlling position when stuck in the half guard. Here's catch wrestling legend Minoru Suzuki using the stockade as a submission attempt with his legs free to move around his opponent:

The most famous part of Lesnar's game is his bull-in-a-china-shop style of shot. This is not a man who drops his knee to the mat and comes in over a huge distance, or a guy like B.J. Penn who boxes his way into range then does a little dip at the knees to get in on the hips perfectly. No, Lesnar's shot is a lowering of the head and charging at the opponent.

Lesnar's trouble was not with men who were excellent on the ground as the single submission loss to Mir would suggest. His real issues were with men who could either prevent him from taking them down, or quickly get up when he did so. Just as it was not that he couldn't take punches—he took some nasty licks from Shane Carwin—it was that he clearly didn't like being the nail instead of the hammer. He was easily disheartened if he found himself under pressure—both the pace of Velasquez or the methodical, unrelenting attack of Overeem.

I have written numerous times about the technical and tactical improvement in Mark Hunt. Particularly his shift from fighting on the lead and trying to sprawl on opponents as he walked in on them (as was the norm in the earlier days of MMA) to a counter fighting style. Hunt's lead arm has come down into a position where it can more readily take the underhook on an opponent who shoots on his hips, and he carries his rear hand open, ready to parry the opponent's jab. Hunt's go-to counter is a left hook over the opponent's right hand or in answer to their jab.

Hunt also does damage with an arcing right across the top of his opponent's jab. The legendary 'cross counter'. This was the punch which sent Stefan Struve wobbling.

The counter uppercut has also proven an invaluable weapon for Hunt against wrestlers and with Lesnar's head-down-and-run takedown attempts it could be a large factor in this fight. Though it works just as well on an opponent who can be convinced to duck, as Hunt showed beautifully as he jabbed Roy Nelson to the fence.

Hunt's knockout of Chris Tuchscherer, which I had hoped to avoid mentioning simply to avoid trying to spell Tuchscherer's name.

On the lead Hunt works almost exclusively with a lightning fast left hook to straight right combination. He covers ground exceptionally quickly for such a stocky man. The left hook is designed to land on the guard and check the opponent, and serves as a feeler to line the right shoulder up with the opponent's centerline, achieving a dominant angle which allows the straight right its optimum path and makes it difficult to see coming or deal with.

The difficulties that Hunt has faced in the past are the same as any fighter who loves to counter—he can be faked out. Stipe Miocic boxed circles around Hunt by feinting, having Hunt swing at air, and then jabbing him up as he recovered. It is extremely tiring to swing at air, after all, and most fighters will simply take their finger off the trigger rather than be made to look a fool. Hunt also struggled with being pinned in side control in that bout—Miocic opted to go to half guard even when he could take a traditionally more advantageous position like side control just to keep Hunt's leg trapped and Hunt stuck to him. This is something that Lesnar also demonstrated against Mir and Couture.

Hunt's gameplan seems like it should be simple. He only has to do what he always does. Sprawl on takedown attempts and either look to land a good counter hook quickly or calm Lesnar down enough to step in with the right straight down the pipe. On the ground Hunt should look to stand up at all costs rather than consolidate a defensive position. Lesnar has mounted guys in the past, but he's far better at riding the turtle and smashing guys from half guard. Getting stuck in a defensive position with Lesnar's weight set and based would be bad for anyone in the division.

Lesnar's plan? Take that opening running knee that he does in every fight and throw it in the slop bucket. The guy needs to settle down instead of giving the best counter puncher he's ever fought the opportunity to show his craft. Yet while Hunt is not the forward moving striker that Overeem was, Lesnar cannot simply be inactive for a few minutes and then hope to shoot. Lesnar's lunchbox hands are decent enough for a heavyweight but it's not worth boxing with Hunt. Lesnar has always like to throw out low kicks and they look both hard and fast for a heavyweight. Hunt's lead leg is almost always toed in and he has trouble with low kicks in mixed martial arts just because of the defensive adjustments he has made to counter wrestle and counter punch. It would be in Lesnar's interest to low kick hard and often, then look for a takedown when Hunt is either visibly hurt or making adjustments to check the kicks. Shooting on a Mark Hunt who is trying to pick his lead leg up to check is a considerably less scary task than shooting on a Mark Hunt who is waiting to uppercut you in the face and then drop his hips on you.

If I had to name decently regarded heavyweights I would expect Lesnar to be able to get to the ground and hold onto, I would give names like Mir, Bigfoot Silva, Roy Nelson. Mark Hunt would be the most highly rated heavyweight I could see Lesnar having a decent chance against if he can get him to the ground. The real question here is just how much Hunt's wrestling has improved and if it has, how real is Lesnar's desire to fight going to be if he tastes the power of Hunt. It might be a strange match up, Lesnar might have no business getting a top ten fighter after five years off, but it's an intriguing fight nonetheless and Lesnar can truly be something to behold on the ground.