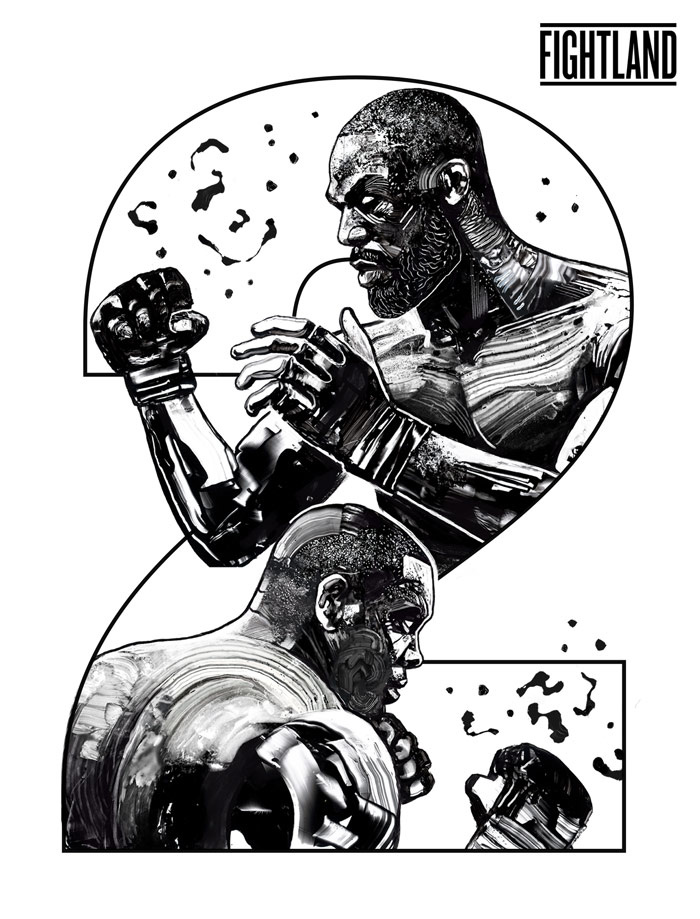 Jon Jones looked bad against Ovince St. Preux. Sure, it was a shut out and St. Preux landed just three good punches over twenty-five minutes but Jones was left gasping for air in the fourth round after meeting almost no resistance. It was not the triumphant return that fans expected nor the upset that anyone wanted. It was just the best fighter in the world looking like he wasn't in shape to do what his brain knew he could: the most disappointing outcome possible. The general consensus was that Jones' arch-rival, Daniel Cormier would have eaten him alive that night, even if Cormier hadn't made the strategic adjustments he needed from the first time and continued to just bullishly walk in on Jones. Cormier should have been in there but he had pulled out due to injury and was left gently kicking himself so as not to aggravate the guilty knee joint.

Cormier's strategy through the first bout was aggression. I suspect his team wanted 'pressure' but the two are different things. As we discussed in Dos Anjos versus Alvarez: Side Stepping a Buzzsaw, pressure is using the threat of strikes to move an opponent into disadvantageous positions. Cormier's aggression was simply walking at Jones, eating strikes en route, and letting Jones circle out each time the two men came close to the fence.

You will recall that Alexander Gustafsson disarmed Jones' linear low line kicks with lateral movement which forced Jones to stop throwing them to prevent giving up a dominant angle (Jones was taken down off of a deflected oblique kick). But pressure requires the use of a fighter's presence which makes it hard for him to deny opportunities to kick his lead leg so Cormier was forced to retract his lead leg every time Jones threw a low line straight kick and then rushed to close the distance again. Furthermore, Cormier took kicks on the forearms and body, and hard left hands to the midsection. The longer the fight went on, the more of these he took in each push forwards to the clinch, and then Jones would circle off before he even got there.

For much of the first round, when the two did get close enough, Cormier would try to pick up his usual high crotch on Jones' left leg. Jones would stuff this and either stiff arm Cormier off and circle out or engage in a clinch with the Olympian. It was here that Cormier showed his power and craft, landing his best blows of the fight. The sequence in the first round where Cormier opened up with his favorite uppercuts and unbalanced Jones only to land a nice right straight was beautiful.

As the rounds progressed Cormier slowed and Jones did a great job of tying up Cormier's right hand in the clinch. This was something Jones demonstrated in his bout with Glover Teixeira, always securing an overhook or wrist control on the hand that his foe planned to hit with.

Jones briefly wrist controls and then overhooks Cormier's right arm and turns him onto the fence.

Both of Jones' fourth round takedowns came as he was dominating Cormier's right hand.

Despite being the taller man in all of his fights, Jones gets his head below the opponent's in every clinch. This dominant head position enables him to pin them against the fence in an upright position and gives him space through which to dig in body blows with his hands.

Body blows were the ones that made the difference. Where Jones' work to the legs and body tired Cormier out and slowed him down, Cormier's own work from the clinch was completely focused on swinging at Jones' head. Cormier reaped none of the benefits of those attrition strategies but this also meant that Jones always knew where Cormier was looking to punch. Even when Jones was struck with one or two uppercuts he was soon clamping down on the arm or smothering the blows with a biceps tie or controlling the wrist.

A nice left to the body on the outside which Jones went to numerous times through the bout.

Each time Jones controlled Cormier's right hand he would drive it down or push it into Cormier and then roll the left elbow over the top. Another strike which had given Glover Teixeira fits. Cormier is obviously far superior to Texeira in the clinch, but pure wrestling ability is very different to the dirty boxing of MMA. Jones might well be the best infighter / dirty boxer in the history of mixed martial arts, certainly he is even more crafty and varied there than Randy Couture, the man previously thought of as the king of the fence fight.

Cormier is going to want two things: to take Jones down or to hammer him with the right hand. In order to do those things effectively he is going to have to offer more than the threat of just the uppercut in the clinch and the high crotch. An improvement in ring cutting would make his job considerably easier—he let Jones circle off the fence far too easily last time and often simply gave up as he got Jones in the position he supposedly wanted him. Tools that Cormier could use to avoid the extensive punishment he took on the way to the clinch are numerous.

Firstly, he should focus on picking his lead leg up to check the kicks and then advance as the foot returns to the mat—the main concern being the oblique kicks and low line side kicks which stall forward motion—though a cross check on the left round kicks Jones pounded Cormier's body and forearm with would work just as well. The cross check isn't as commonly used in many gyms but it is a great technique for countering kicking with flurries of punching. Checking with the legs to create a long barrier reduces the chances of round kicks sneaking under a fighter's elbow. Furthermore, as Badr Hari's first bout with Semmy Schilt will show, a fighter can get in to punching range fast after performing a cross check with his lead leg because his driving foot is still planted on the mat as his checking leg comes down.

Another method that Cormier could use to improve his odds of cutting the ring on Jones and marking him up even while on the outside is to throw his own low kicks. Some fighters get bogged down in how fundamentally sound their low kicks are compared to their opponent's, but ugly, stubby, awkward low kicks do the job of breaking a stance and forcing an opponent to check just fine. When Cormier low kicked in the first bout he knocked Jones' legs around and had windows in which to work afterwards. Similarly Quinton Jackson was able to land effective low kicks on Jones. The more Jones moves—which he did more against Cormier than anyone else he's fought—the less likely he will be in position to check.

On the subject of clinch work, Jones will tie Cormier's hands up and especially his right. Jones even looked for that whizzer crank that he used to injure Teixeira's arm in their first bout (the same trick which Sandy Saddler used to separate Willie Pep's shoulder in one of their bouts). Jones' wrist control was a constant feature through the first fight. Those longer clinches where one man has a single collar tie and one of Cormier's hands is tied up do not serve Cormier well as he can't hit with his hands and has no hope of getting in on Jones' hips. He just eats knees and elbows.

Rather than trying to fight against and out of the wrist control, it could be worth Cormier finding something else to threaten with. A 'nutcracker': a technique that doesn't stand out as a concern for the man on the defensive end but which after a couple demands adjustments. Think of the body jab on the outside—something which moves through a common opening in even the best guards but when fighters try to stoically ignore it they wind up sucking wind. Recalling the work of Cain Velasquez against Junior dos Santos, knees to inside of the thigh are an under-rated weapon in mixed martial arts. They are also a great height for kneeing as the hip can be engaged fully without having to worry about first lifting the knee.

Not only can good knees to the inside of the legs force the opponent to make adjustments, they can break his base and create openings for further strikes. An Alistair Overeem favorite is to knock one of the opponent's leg out with a hard knee to the inside of the thigh, then come straight up the middle to the gut with the other knee. Hell, in Cormier's case he could even try kneeing one knee out and dropping in for his high crotch on the other leg—similar to the amateur wrestling strategy of slapping one leg to shoot on the other when it is withdrawn. Perhaps more relevant to Cormier and his height disadvantage is Rambaa Somdet. Always the shorter man in his Muay Thai bouts, Somdet didn't like the longer clinches where he could suffer knees to the head and body and couldn't land his own. So when Somdet's opponents got a handle on him, Somdet liked to land the hardest knees to the inside of the thigh that he could. It either broke the opponent's stance or forced them to move, and then Somdet would dive straight into a chest-to-chest clinch and lock his arms around them, escaping that disadvantageous long clinch. Focusing on achieving chest to chest clinches might remove the threat of Cormier's right hand for the most part, but it would also keep him inside of Jones' long levers and in position to utilize his wrestling pedigree.

Jones has a lot of questions to answer following his fight with St. Preux, and Cormier is technically the champion, but it is Cormier who must make the changes. Walking in on Jon Jones seems unlikely to work unless he turns up in awful shape again. Turning aggression into pressure, mitigating the wrist control, and avoiding damage in the open clinches from which Jones can strike are of primary importance to Cormier's performance. How these issues have been addressed by both camps over the last few months will dictate whether or not the Cormier – Jones saga ends at UFC 200 or spills over into a third, equally anticipated fight.