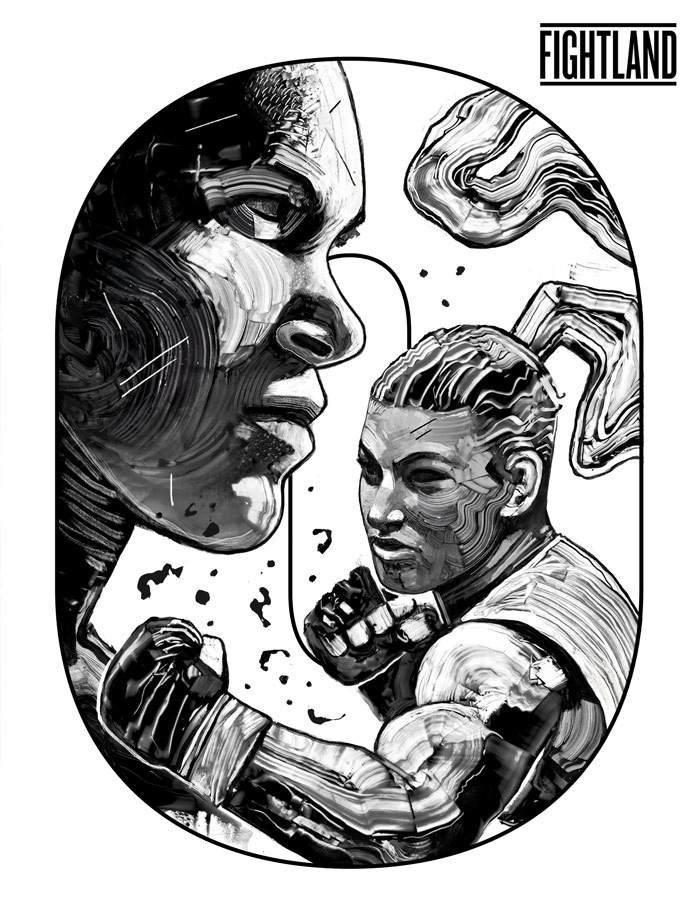 In the bareknuckle days of the London Prize Ring, the sports and dandies who attended the fist fights had a word for that grittiness, that irrational ability to take a punch to the face and only become more resolute: they called it 'bottom'. A man said to be in possession of some bottom was admirable. The bravest competitors, as Pierce Egan would relate, were said to have 'endless bottom'. You can't teach it, you can't learn it, you're either born with it or have a bad enough life outside of fighting that it is beaten into you. Miesha Tate, the UFC's women's bantamweight champion, has the most bottom I have seen in her division. She has been beaten from pillar to post and come back to swing the momentum of the fight and finish strong enough to pick up the win. In winning the title from Holly Holm in her last bout, Tate was thoroughly outclassed on the feet after having seemingly blown her big chance on Holm's back. Then in the fifth round Tate timed her shot, got on Holm's back and snuck the choke in before Holm even had time to think. Yes, Tate's bottom is something to behold. And Tate could well be the least likely champion in the UFC. The bantamweight title went from hanging around the waist of the unstoppable Ronda Rousey, to the clinically perfect striker Holly Holm, and then somehow came to rest around the shapely form of the gutsy glutton for punishment, Tate. I say “somehow”, she pulled off an incredible last round submission against Holm and proved herself worthy of the belt but it is tough to be the champion when many fans and pundits rate the suspected retiree Ronda Rousey, female smashing machine Cat Zingano, and Holly Holm on any other night above you.

Tate's opponent at UFC 200 is Amanda Nunes, who was also bested by Cat Zingano in recent memory. So that puts us in a weird position where most would feel like the two fighters competing for the title—in what is now the sole title fight on the UFC 200 card—aren't actually the best in the world at that weightclass. On the other hand, both are reckless enough on the feet and skilled enough on the ground that this could turn into exactly the type of barnburner that the casual fan and technique geek both adore.

Amanda Nunes is a fighter in a similar style to Renan Barao. She hits very hard on the feet and takes opponents down when that isn't getting it done. In fact she's considerably more effective on the floor. But the hitting hard part has led to the idea that she's a top flight striker. Stack her up next to Holly Holm or Valentina Shevchenko and she's certainly less slick. The most notable thing about her striking is that she loads up on everything she throws. Against Germaine de Randamie this was especially obvious.

Her lack of punches to set up and hide her intentions amplifies this.

Nunes' ground and pound from mount in that bout also demonstrated that accuracy isn't one of her strong suits, though the fight was called off as she rained down blows on De Randami's forearms. One of Nunes' best hurting methods on the ground is the old throw-by pass to right hand. That Fedor Emelianenko favorite. The same one that Penn used to wobble Hughes, Henderson used to starch Babalu, and Rua used to decimate Overeem. It's as simple as it gets—because without the pants there aren't nearly so many options for standing passes in MMA—but it is still so even if it only lands you in half or three quarter guard.

On the feet, Nunes has acquired something of a reputation but it largely off the back of her battering Shayna Baszler and Sara McMann. In a division of fighters who are very clunky throwing their hands, McMann and Bazsler are among the least comfortable outside of the grappling realm. Nunes' boxing is largely built around swinging out the left hook when her opponent steps in and trying to land the right straight off of it.

I very much like the front kick Nunes occasionally digs in though.

Now watch that loading up on low kicks and punches again. See how blatant it is? The bouncing around, the feints which look very little like her actual kicks or punches, the pause and then the deep step in to strike. With a deep step on a wheel kick she even gave Sara McMann her back for free.

Even on the right hand which has done all of the hurting for her she draws it back before she punches and then steps in to throw it with no attempt to hide it and her other hand down by her waist. She also has that other Renan Barao feature, letting her shoulders lean far forward of her hips. This often results in a loss of power and ruins the balance of the fighter, making it difficult to cover ground if the opponent moves away quickly. It also serves the face up on a platter to the opponent.

For whatever reason, this trait is far more noticeable in women's MMA than in men's MMA—though as noted earlier, Renan Barao won and defended a world title while doing this.  Tate is even more guilty of it than Nunes as she reaches hard, almost losing her balance when throwing her right hands and being largely unable to combination punch effectively after it. It also offered up an easy clinch to Ronda Rousey again and again. In fact it has become Tate's opening ritual to come out at the bell and swing wild, sloppy right hands, eating far more than she lands.

The one time that Tate's right hand has synergized with the rest of her game in recent history was in her fight with Jessica Eye. After a right hand into an easily stuffed shot, Tate faked the shot and just planted the right hand on eye's jaw, dropping the better boxer to the mat.

The fun of this fight is that as unpolished as Nunes' striking appears, it is her aggression which will trouble Tate. Nunes' wrestling is strong enough that she might not feel the need to strike so conservatively as Holly Holm did. Holm against Rousey—who desperately rushed for the clinch in every fight—was a perfect match up, because Holm could side step and Rousey's aggression would add force to Holm's counters. Holm versus Tate was not nearly so fun for the boxer because she constantly had to worry about the level change which got her to the mat in the early going and which eventually allowed Miesha Tate to take her back and choke her in just a single moment of weakness.

Nunes, however, is a much more confident grappler and would love to get on top of Tate and start hitting her. The smooth footwork, feints and counters aren't necessary if making a brawl of it so clearly favors Nunes' power punching style. You aren't going to see the best technical striking MMA has to offer, but often that is not what is needed.

We have covered five fights which were going down this week: Dos Anjos versus Alvarez, Aldo versus Edgar, Jones versus Cormier (may it rest in peace), Lesnar versus Hunt, and now Tate versus Nunes. But there are plenty more big fights going on. Cain Velasquez is taking on Travis Browne in a rare case of two heavyweights under thirty-five years old.  T.J. Dillashaw gets a rematch against the long absent and always peculiar Raphael Assuncao. Johny Hendricks looks to rebound against the hungry and always just short of being a real contender Kelvin Gastelum. Derrick Lewis and Roy Nelson will test each other's gas tanks over a few minutes of throwing cinder blocks. Ross Pearson will test his tip-top MMA boxing against Bellator's champion, Will Brooks. And Joanna Jedrzejczyk defends her straw weight crown in a five rounder against her old foe, Claudia Gadelha. It's a stupidly stacked weekend. Watch the three events and get back here Monday for the recap of one of the biggest weekends in UFC history.