The Time Is Now: A Summary 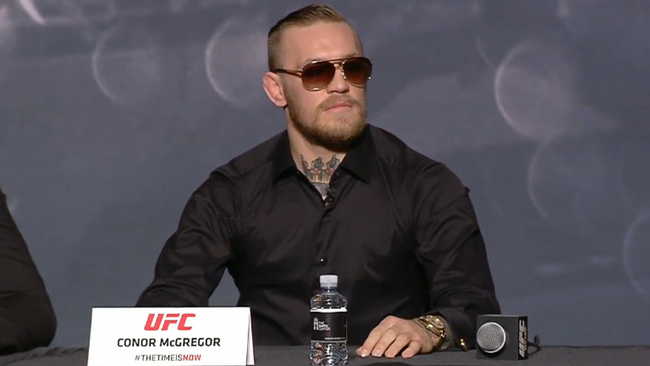 To fans’ chagrin, Dana White and the UFC tried their best, but the first question shot at Dana White was about the announcement, and, well, there just wasn't one. It threw a curve ball that left everyone present a little confused. Jon Jones and Cormier did their verbal waltz and Nick Diaz spoke to Georges St-Pierre, wherever he was. Anderson Silva’s good to go, no worries about the lumbago. Conor McGregor called Dennis a midget even though he looked like he was trying to sneak inches when he walked in. Overall, everyone’s healthy and ready to get the year going, so here are the important things about today’s press conference.

For the first time in its 21 year timeline, the UFC established and announced ahead of time its yearly fight calendar. Characters aside, it was the biggest part of the UFC’s “The Time Is Now” announcement event that took place at The Smith Center for the Performing Arts in Las Vegas.

2015 will see 45 events, two less than this year’s troubled schedule. Seven of those fights will take place in Brazil, while five new countries will see their UFC debut: Korea, Poland, Russia and Switzerland will all see the very first UFC card on their soil. Other countries that’ll get fights at home are repeat-countries China, Germany, United Arab Emirates, Australia, Japan, Canada, and once again after a historic first-time, Mexico. Aside from a confirmation of a return to Mexico City, no other cities were announced. We think it’s cool that there is so much emphasis being placed on international event as the sport begins to make roots in more and more places around the world. With the success of Mexico and Ireland, as well as with Brazil well its on way to becoming the UFC’s biggest asset, it only makes sense to bring the show to more places. 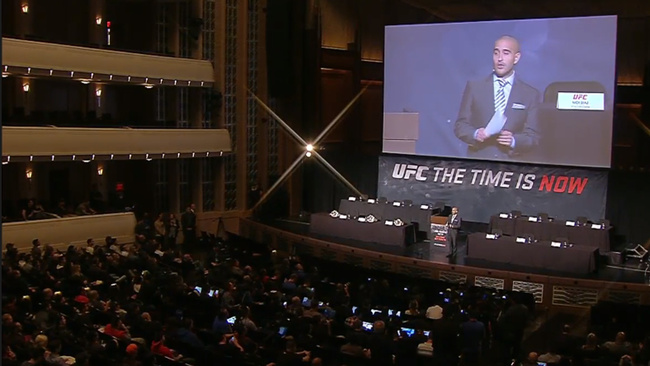 At the very least, the UFC demonstrated the kind of professionalism we associate with the United States’ other professional leagues as they have preset schedules that are made available to the public prior to the season’s beginning. It makes clear that the UFC is trying to step up their programming.

Brazil continues to be favorited by the UFC when setting up dates—from 2011 until the Jose Aldo versus Chad Mendes rematch, the promotion has hosted 18 events on Brazilian soil. Canada had half of that number as the UFC’s second most visited country outside of the U.S.. This year alone will have seen seven fights in Brazil, including Lyoto Machida’s middleweight bout versus C.B. Dolloway on December 20th.

2015 is going to be a big year. As a reminder: January 3rd, Jon Jones defends his light heavyweight belt against Daniel Cormier. On January 31st, Anderson Silva returns to the Octagon to face the loquacious Nick Diaz. Barely a month later, Vitor Belfort will challenge Chris Weidman’s middleweight title on the same night that Cat Zingano challenges Ronda Rousey’s bantamweight title, while also on the same card, Jacaré Souza and Yoel Romero give fans an explosive middleweight alternative.

The UFC’s big events of 2015, albeit some without set cards, are as follows: