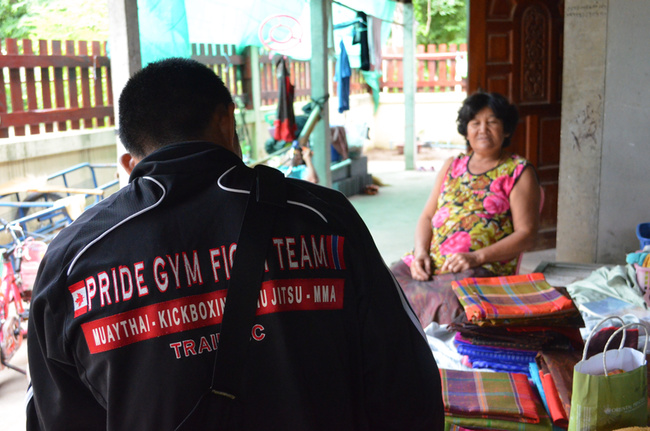 On a Saturday night promotion in Thailand's eastern Isaan region, one young contender jumps into the ring in his standard Muay Thai shorts, gloves, and mongkol. But unlike his opponent, tied around his waist is a colorful plaid sash. He performs the traditional wai kru and ram muay, then returns to his corner for the final blessing before the fight. After whispering a final prayer, the cornerman removes the plaid sash from around the child fighter's waist, and the fighter walks to the middle of the ring to face his opponent.

Next to me, my friend Boom notices my eyes trained on the sash as it's removed and put aside. "It's called a pakama," he says. "A lot of Isaan fighters wear it as a symbol of their home and family ties."

Boom, who fights out of nearby Giatbundit Gym, was born in a small village along the border of Isaan's Buriram and Khorat provinces, at a time when pakama were ubiquitous. "The pakama is used in a lot of Buddhist ceremonies and special occasions too," he tells me, "not just before Muay Thai fights. I wore one during my wedding ceremony." 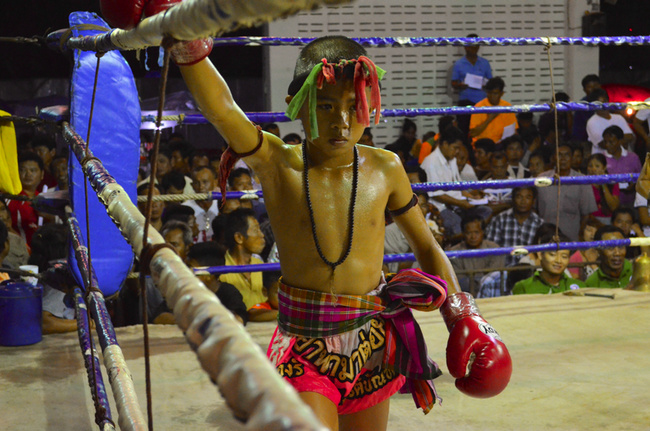 Ong Lee, a fighter for Giatbundit Gym, pays homage to his Isaan heritage by entering the ring with a pakama around his waist.

Traditionally made of cotton or silk, the pakama is valued for its versatility—pakama are worn as skirts and sashes, used as blankets and towels, positioned as floor and table coverings, tied up to carry belongings, used as makeshift fans or hats, even rigged up as hammocks for children. Despite being found across Thailand, pakama are closely associated with the regional identity of Isaan.

But like all modes of fashion and technology, its prevalence is changing alongside society. Recent decades have seen the pakama's popularity naturally decline a bit in modern Thailand with the advent of new products and changing aesthetics. These days, most pakama can be seen tied around the waists of old men, a habit picked up in their youth when carrying a pakama was like a Boy Scout carrying a pocket knife—always be prepared. 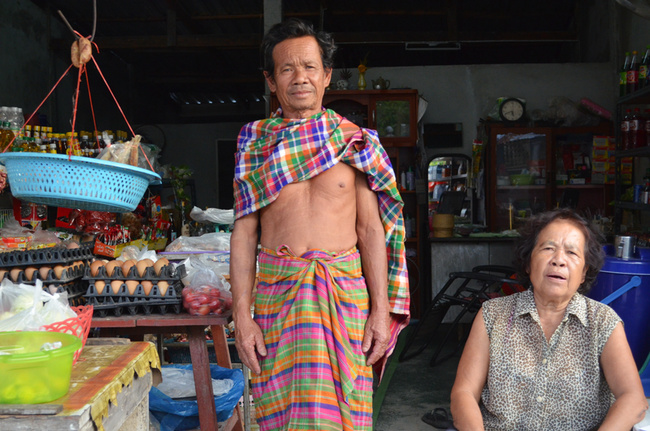 "Where do people get them?" I ask Boom. "Are they sold around here?"

"A little bit, but for the nicer ones, you can get them in the villages. My aunt actually makes them." He then explains how she does it all herself, from raising the silk worms to spinning, dying, and weaving the thread into a final product. "I'll take you to the village tomorrow if you want to see how she does it all."

The next morning, we leave the moderately developed town of Phutthaisong, where Boom lives with his wife and daughter, and drive a half hour down a narrow two-lane highway. Crossing into the village, we meander down a dirt road, wandering herds of buffalo and their shepherds slowing us down. 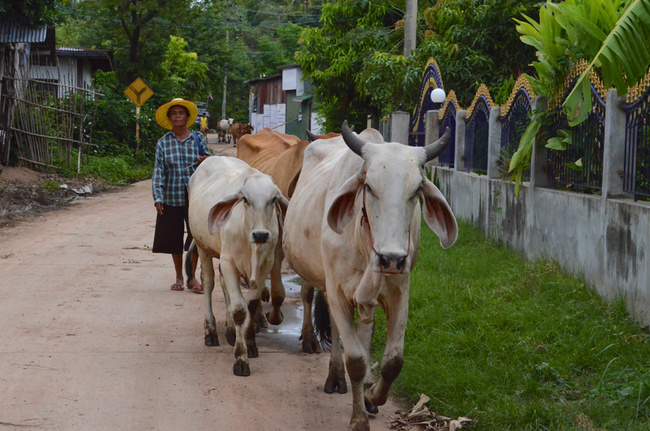 Buffalo herds pass just in front of Boom's aunt's home in the village.

Like many other local artisans, Boom's aunt sells her pakama out of her home. She has no shop set up to cater to tourists, Thai or foreign, for the simple reason that in this area of the country, there are no tourists. The artisans' customers are locals or friends of locals, all of whom know where she and her products are to be found.

Auntie introduces us to her weaving workshop, set up outside a house that's bigger than I'd expected. Her loom is next to the house in the open air, though still protected under a roof, while skeins of silk thread are hung in bags or wrapped around huge wooden spools, scattered around all the dressers, closets, and corners of her home. She digs through one of the cabinets and produces a pile of finished pakama, all stacked in a rainbow of patterns, like the fabric version of lollipops in a candy store. 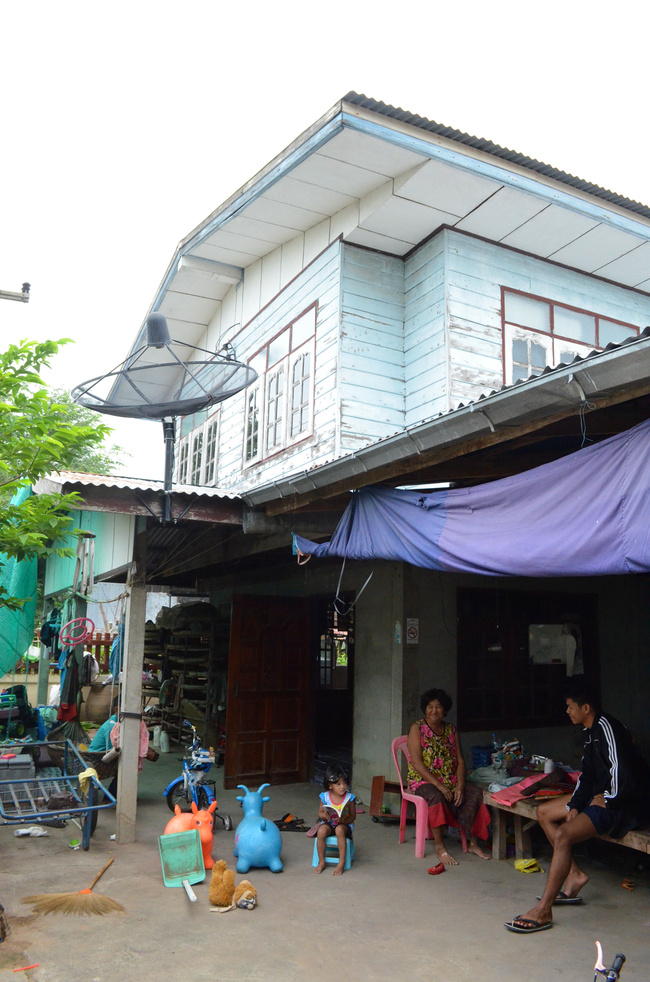 "I really enjoy creating these," she says while unfolding one of the sashes. "I've been doing it since I was a teenager. It's really time-consuming, but it's fulfilling. It's only my secondary job, though. Our main income comes from rice farming."

Producing pakama is a bit of a tradition in her family—she remembers playing as a child while her grandmother worked at the loom. Around the age of 15, she started learning the craft from her cousins and some of the older village women. Now, she and her sister are well known pakama artisans in the area.

"Is there any rivalry between you and your sister over who can make better pakama?" I ask.

"No," she says through laughs, "but sometimes we collaborate on designs and ideas. We like to see who can come up with the prettiest or most complex patterns." 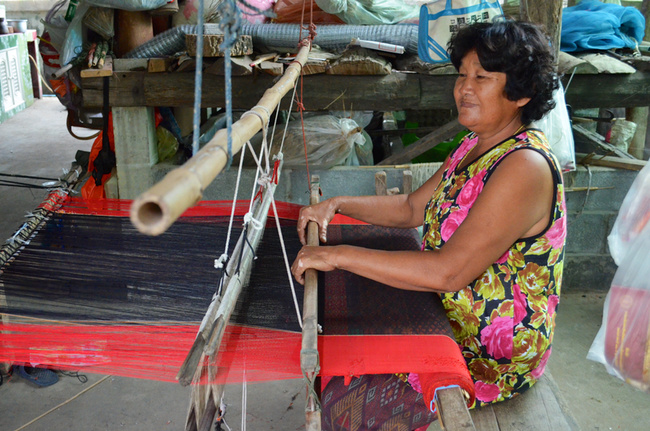 Auntie weaving a new pakama at the loom.

Boom picks up a pakama and demonstrates a few different traditional styles in which it's worn. Wearing a pakama is not as common for modern Thais as it was just one or two generations ago, he explains, but it still retains a special significance for local fighters.

"Some fighters wear pakama into the ring because they see their boxer idols from Isaan doing the same thing," Boom continues, "but for the most part, I think fighters do it out of a sense of regional pride. For me, I'm proud to wear the pakama because it's part of my heritage."

Many fighters in Thailand leave home at a young age to live and train at gyms outside their villages. Traditionally, on the occasion of a young fighter's departure to a distant gym, his parents will tie a pakama around his waist, both as a useful parting gift and as a tangible reminder of his family. Many Isaan fighters thus continue to wear their pakama into the ring during the wai kru and ram muay, perhaps as a comforting symbol of home, a good luck charm, or as a way to pay homage to their regional roots. 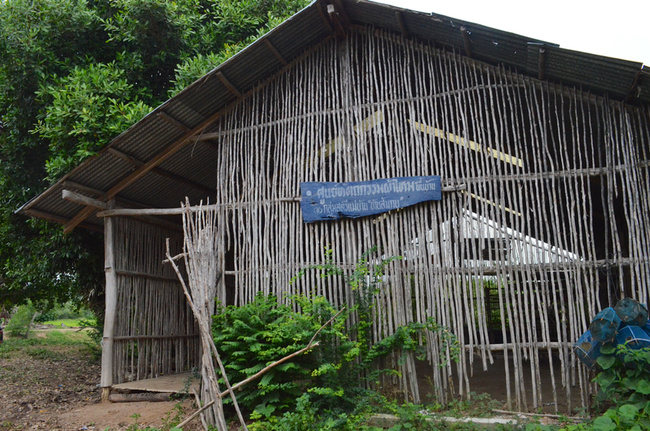 Stick house for the silk worms.

Producing pakama by hand is a laborious process. Auntie takes us across the dirt road to a stick house and shows us the wooden trays she uses for raising the silk worms. "It takes about three to four weeks to get enough silk for a pakama. I harvest it directly from the silkworms, and then you have to spin, dye, and weave it. To make a long pakama of 10 meters or so, I'd probably need about two or three months. I'll usually weave a long one and then cut it up and sell the shorter pieces individually." 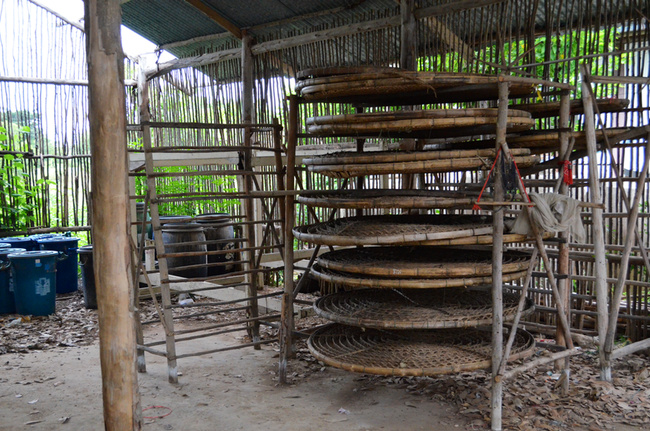 I learn from Boom's aunt that nearly every household in rural Isaan probably has at least one pakama. "It's part of our Isaan tradition, just like the patterns I use," she says. "All areas have their own traditional patterns."

She holds up a few solid-colored sashes with delicate white accenting. "I give these as gifts to my friends and relatives, but I also sell them too. A lot of my customers are local teachers who wear my pakama for festivals and other special occasions."

Boom's aunt can even boast the Thai royal family as customers. Preferring to buy the high-quality silk handmade in this region, the royal family sources silk thread and finished pakama from this and other surrounding small villages, providing much needed revenue into rural pockets of Thailand. 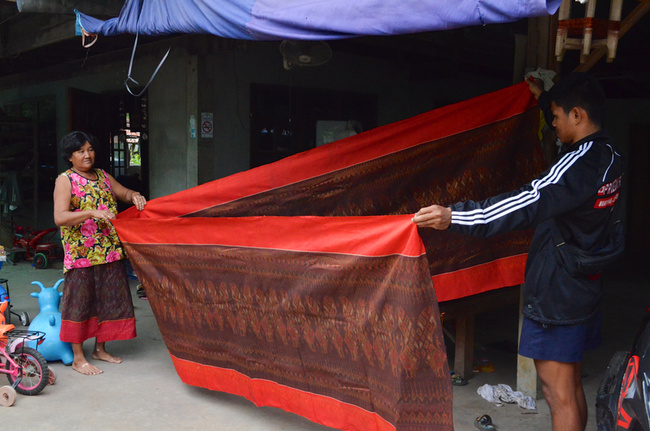 Our host pulls out a long pakama and motions to Boom to hold it up. "Here, look at this one," she says as she unfolds a pakama so large it takes up nearly all the length of her work space, even when still folded in half. On it is an intricate pattern of peacocks placed on an iridescent cocoa color framed by bright red borders.

"I'm proudest of this one with the birds," she says. "It's been the most time-consuming and difficult one for me because the pattern is so complicated. I don't think I could bear to sell it. I think I'd like to pass it on to my daughter instead." 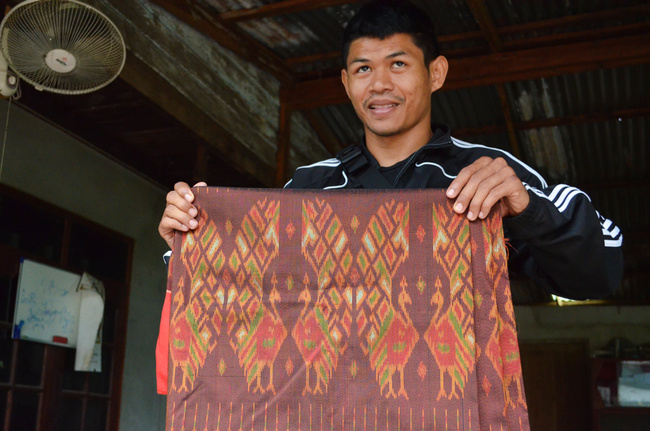 Special thanks to Boom Watthanaya for help with interpretation.