The Triumph of the (Enormous) Little Guy 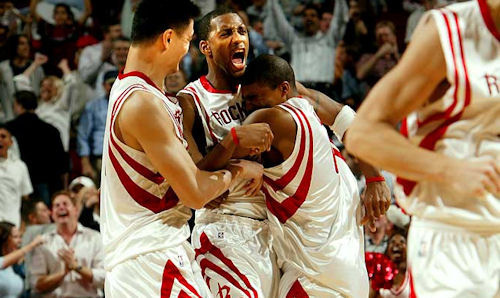 It came at the tail end of a meaningless early-season NBA game between the San Antonio Spurs (who would go on to win that year’s championship trophy) and the Houston Rockets (who would do nothing of the kind). With 35 seconds left in the fourth quarter, and the Spurs up by eight, that December game was essentially over. Rockets fans of questionable devotion had long before started filing out to their cars, the announcers had called the game for the Spurs, the concession stands had shut down their deep fryers. All was right with the world.

Then Tracy McGrady, an ultra-talented but underachieving superstar for the Rockets, proceeded to hit four straight three-point shots (and one free throw) over the next 35 seconds, scoring 13 straight points and single-handedly winning the game for the Rockets. It was an unprecendented feat of athleticism that was somehow even more powerful for being so meaningless: It seemed to amplify the absurdity of participating in or caring about sports (or anything else, really), which made the moment all the more poignant, for me anyway. So when McGrady stole the ball from Devin Harris with eight seconds left, ran down the court, raised up at the three-point line, and hit the game-winning jump-shot over the outstretched hands of three Spurs, I went nuts in my living room. Completely aware that the game would count for nothing at the end of the season, generally uninterested in the David-Goliath narrative, and entirely indifferent to the outcome of those two teams’ seasons (not being a man given to team loyalty), still I involuntarily shouted at the top of my lungs and jumped up and down on the couch. Even I was powerless before that kind of last-minute athletic defiance of impossibility. For one frozen moment in December, one month after the re-election of George W. Bush had killed what I thought was the last of my hope, Tracy McGrady came along and gave me something to believe in again.

This past Saturday night, I had only my second-ever involuntarily gushing fit as the result of watching a sporting event. This time, it was the moment when Antonio “Bigfoot” Silva knocked out Alistair Overeem on his feet early in the third round of their heavyweight fight at UFC 156.

Despite being a longtime MMA fan, and despite the fact that Overeem has been considered a top-10 heavyweight worldwide for that entire time, I’ve never cared much about the Dutch kickboxer. He was obviously a cheat, a steroid user whose body had blown up to comic-book-hero-like proportions and who had capitalized on lenient testing rules in foreign countries to bully his opponents and puff up a questionable record against questionable opponents. As for Silva, I had no real feelings either way. I was, of course, upset when he beat my beloved Fedor Emelianenko in early 2011, but he seemed like a talented enough fighter – a perpetual gatekeeper, though, who could hang with the Roy Nelsons and the Stipe Miocics of the world but who wilted messily against more talented fighters like Cain Velasquez.

All of which is to say I didn’t really care who won.

But that all changed early in the third round, when Silva caught the Dutchman with a head kick and some brutal uppercuts and hooks to knock Overeem out on his feet. For weeks before the fight, Overeem had been dismissive of Silva’s abilities and smug about his own, acting like a schoolyard bully. When the fight began, he kept his hands down and his chin up, daring Silva to try and hit him. Even Joe Rogan and Mike Goldberg, the UFC announcers, barely gave Silva a chance. They kept talking about Overeem’s speed and overwhelming power. They made is seem like Silva had nothing but a puncher’s chance. They bought into the myth of "über-reem." Silva was, to everyone involved, just a huge, barely moving target, a speedbump on the way to Overeem's inevitable title shot.

But it was clear as the second round went on that Overeem was wilting, just like Silva’s corner-men kept saying he would. Be patient, they told him, and wait it out. After all, all those comically large muscles require oxygen, and Overeem had made a career out of ending fights early to avoid having to test his body late. And when Silva caught the kickboxer with a knee to the chest right at the end of round two, I felt that old, long-dormant Tracy McGrady feeling start to well in me again. Could it be that the kid counted out by everyone would make his way back against a self-satisfied giant and shock the world? Could Silva be Muhammad Ali to his own George Foreman? Could the rope-a-dope work again?

When it did, I woke my roommate with my yells. I may have woken my neighbor. Watching “Bigfoot” Silva knock out Alistair Overeem cold was like watching the confirmation of possibility. It was a reminder that absolutely nothing in this world is assured, especially not that the biggest, strongest, hardest-hitting guy is always going to win a fight. Which is a lesson that seems to run contrary to our deepest, most primordial instincts. 20 years ago, the Gracie family sent their smallest son, Royce, to UFC 1 to prove that size meant nothing in a fight, and the last two decades have been the continuing and developing confirmation of that truth. And Silva's win was the perfect proof of that proposition, this despite his own hulking size. I’m not just talking about something romantic and sentimental like will or heart. I’m talking about strategy and intelligence and the confidence to believe that that the inhuman behemoth of a man standing there waiting (and able) to tear your head off will get tired, that his unnatural body will eventually betray him, that some things are more important than power. You just have to be willing to take a whole bunch of fists to your face in the meantime.

Junior Dos Santos Lets Us All the Way In

In Search of a Little Downtime