The Twisted and Terrible History of Men Fighting Bears 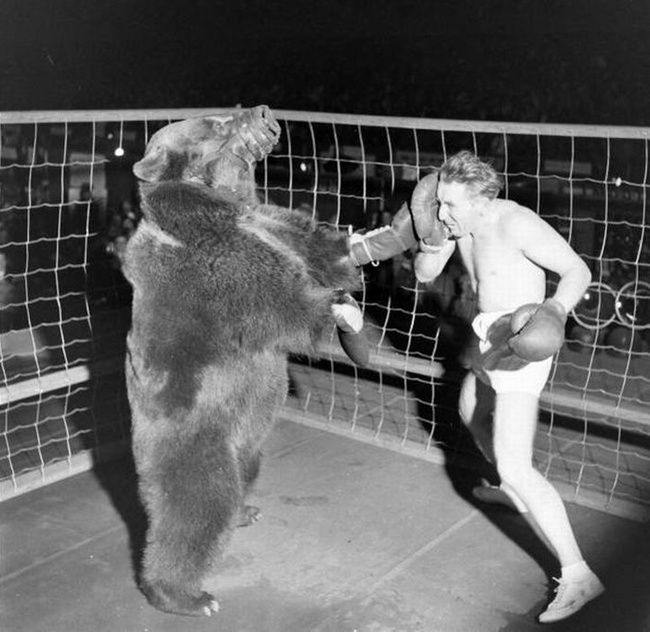 For every majestic wild who just wants to mind their own business in their natural habitat, there is, apparently, some asshole who thinks “I bet I could take that thing in a fight” and a bunch of other assholes who are willing to stand around and watch them fight the poor beast. Gator wrestling is so popular in certain parts of the States that you can actually take classes in it. Octopus wrestling is, inexplicably, a thing. And, as we explored earlier this month, kangaroos have been forced to box garbage men like Woody Allen and each other for centuries now.

But the Godless killing machines known as bears seem to occupy a unique place in the animal kingdom when it comes to this nonsense, because they have been forced to box and wrestle humans. They’re basically the mixed martial artists of the unwarranted interspecies combat world.

If you can get over the fact that it’s a terrible and cruel idea, you can almost see the logic in this multidisciplinary approach to man-on-bear action. When they fight amongst themselves, bears have a standup game that, well, bears a resemblance to both boxing-style striking and wrestling pummelling, so someone who wanted to step into the ring with a member of the Urisdae family could attempt to mimic and best either skill set. He just couldn’t combine the two, because that would be uncivilized.

According to HistoryLink, the tradition of bear wrestling, a sport in which “a human contestant grapples with a half-tamed ursine that has usually suffered some combination of having its teeth yanked and deadly sharp claws removed, being muzzled and fitted with mitts, or having its leg and arm tendons cut,” first gained popularity in Europe in the mid-nineteenth century and made its American debut in 1877. “In November of that year Brooklyn's Daily Eagle documented an event in which a ‘Pyrenean Bear, who wrestles all comers under the rules,’ was the star attraction ("Wrestling Bear Results"). Then, that same month, Pete the wrestling bear defeated his opponent/trainer Adrian at New York's Gilmore's Gardens.”

Soon, bear wrestling was a mainstay in venues across the country. In New York, two circus bears named Lena and Martin participated in a series of fights against event promoters and their audiences (a reporter from the New York Times, unimpressed with Martin’s debut bout, wrote that “The bear did not understand the fun of the thing.”) A man named Lucien Marc bested a bear in Cincinnati the following year, but lost a thumb in the process. Another man named Billy Clark emerged victorious from a similar encounter in Puebla, Mexico after some pro-wrestling style intervention on his account. Then, on April 14, 1878, poor Lena got a modicum of revenge when she killed some dude named Jean Francis Borne in the heat of combat. 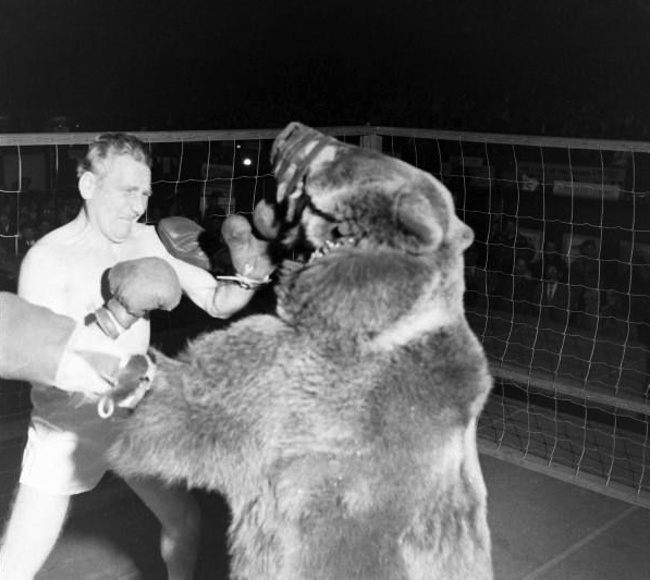 This did almost nothing to temper the public’s taste for the activity, and the phenomenon spread to circuses across the country. Bears with names like Teddy, Buster Bruin, Big Boy, Jiggs, Gorgeous Gus, and Terrible Ted would achieve infamy in the sport over the course of the next hundred or so years. Battling Bruno was knighted by Queen Victoria for his performance in the ring, and stuffed after his death by her request.  Victor, arguably the most successful bear wrestler of all time, went on to appear on a number of high profile TV shows, wrestle against The Destroyer and Roddy Piper, among other pro wrestlers, and compete in an ABA halftime show (yes, that scene from Semi-Pro was based on a true story).

Meanwhile in Porta Costa, California, a local bear was starting to gain notoriety for its boxing. On June 27, 1885, the Contra Costa Gazette reported on one of its matches:

"A short but exciting slogging match took place at Port Costa Tuesday between Thomas Huckstep of Martinez and Scammon's bear whose reputation as a hard hitter extends all the way to Avon from Vallejo Junction. [... ] Huckstep led up with a feint at the bear's nose. Bruin [... ] reached out with his right, giving Huckstep a side-swiper that knocked him completely off his pins. Bruin instantly followed this attack with his left, raking Huckstep's coat from stem to stern. Huckstep immediately rolled out of the ring, and Bob Lee, who was acting as referee, declared the match at an end. Bruin having knocked his man out in one round.”

The bear made another sartorially devastating appearance in the same paper the next month—this time tearing apart an $86 custom suit—before fading into obscurity. 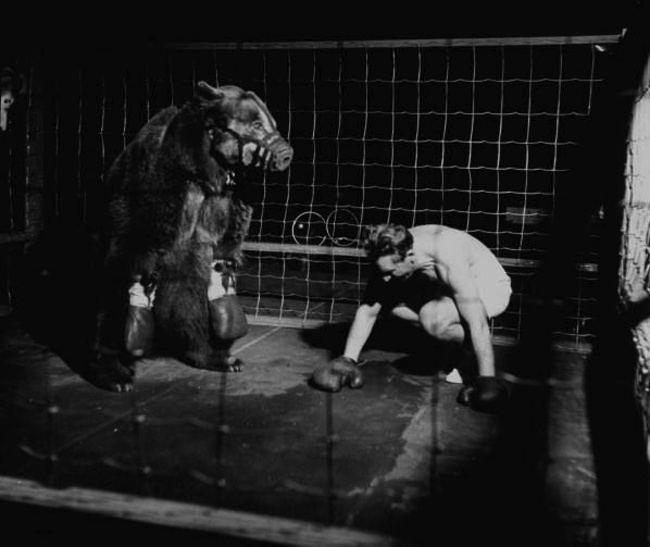 Bear boxing seems to have gone underground (or even more underground) for a few decades after that, but it gained media attention again in 1937 when a match was filmed in New York City. It surfaced again in 1949 when Gus Waldorf (described by Cracked as “a boxer so distinguished that this picture is literally all he's known for”) fought a bear in a cage. He lost the match, but gained lifetime infamy, as the haunting shots from that event became the most famous photos from the boxing bear era.

Some boxer of at least moderate distinction also took up the questionable cause. Tony Galento, a boxer and club owner from the late ‘30s and early ‘40s once took on a grizzly in order to drum up excitement for his next match. He also took on a boxing kangaroo and a dead octopus in the name of hype. Heavyweight Chuck Wepner, perhaps best known as the inspiration for Rocky, let a grizzly throw him around at one point. And he still came back for a rematch. 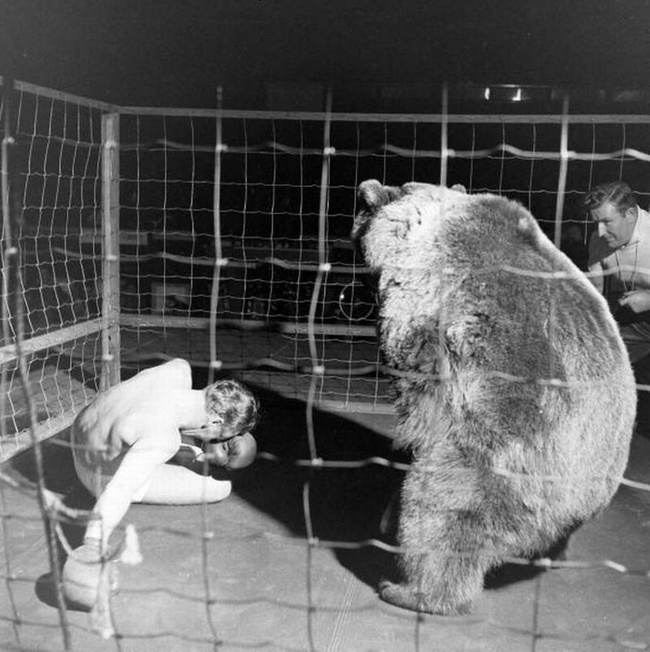 Although enthusiasm for bear fights of both the wrestling and boxing variety has waned with the rise of animal rights, it hasn’t disappeared as much as it really should. In 1995, a bar in Columbus, Ohio was caught running a series of fights that pit drunk college students against a bear named Ceasar. Uproar over the situation finally inspired the city to ban both kangaroo and bear wrestling within its limits. And although they kept humans out of the picture, a Chinese zoo did come under fire for forcing cubs to fight each other—while dressed in full boxing regalia—in 2007 according to The Telegraph.

Promisingly, the internet seems to prefer bear on bear combat in the wild (or the suburbs) to such blatant displays of animal cruelty that don’t end in death or thumb-eating as often as they probably should. For every snippet of info on an old boxing or wrestling match you find online, you’ll be treated to even more footage of grappling koalas, boxing polar bears, posturing cubs, or bears daring each other to come at them, bro. All of which are infinitely more amusing and less evil than the alternative. And if you’re really itching for some good old man vs. bear conflict, you can always enjoy this delightfully photoshopped collection of pictures of NHL player Tanner Glass taking on bears.