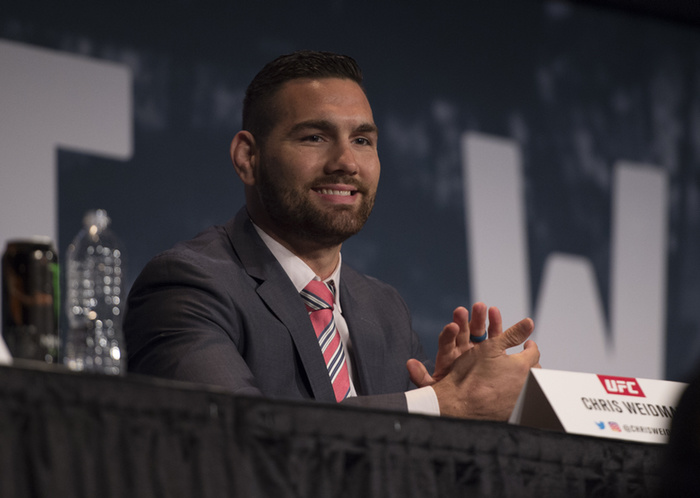 Earlier this year, in the main event of UFC 199, England’s Michael Bisping registered one of the biggest upsets in recent memory by shutting the lights off on then middleweight champion Luke Rockhold with a salvo of first-round punches. As exciting as the Brit’s unexpected title win was, however, it ultimately threw a bit of a wrench into the evolution of the middleweight division.

Logic suggested that the first shot at Bisping’s middleweight crown would go to one of four men. The first of these four men was Rockhold who, to remind, thumped the Brit the first time they met back in late 2014. The second of these men was Chris Weidman, who surrendered the title to Rockhold in late 2015 after a fairly dominant reign as champ. The third was former Cuban Olympian Yoel Romero, who was, and still is riding high on a seven-fight win-streak. The last of these men was Brazil’s Ronaldo “Jacare” Souza, who has won 9 of his last 10 fights—the lone loss in that stretch being a controversial decision defeat to the aforementioned Olympian. Yes, in a world where rankings ruled, one of these four men would surely receive the first crack at the unlikely champion’s glimmering strap—or so we thought.

Instead, the UFC opted to give the title shot to an aging Dan Henderson, who scored a career-revivifying knockout win over Hector Lombard less than an hour before Bisping’s upset of Rockhold.

Though this move was a glaring contradiction of the middleweight division’s rankings, the reasons for its booking were immediately clear: Bisping wanted the chance to avenge a 2009 knockout loss to Henderson—far and away the ugliest loss on his record—before Henderson retired. The coinciding wins of Bisping and Henderson, then, gifted the UFC with a buzzworthy title fight with a built-in revenge narrative. And revenge stories always sell—just ask Conor McGregor and Nate Diaz, whose August rematch broke all previous UFC pay-per-view sale records.

While it was easy to understand the UFC’s choice to go with Bisping vs. Henderson 2 for the next middleweight title fight, however, the move did leave four of the organization’s very best middleweights out in the cold, forced to watch through the proverbial window as the British champ and his American nemesis were pencilled in for the main event of UFC 204.

Luckily, the UFC is handling the fallout created by this unlikely UFC 204 title fight perfectly, as all four of the aforementioned left-out middleweights will fight in the month after Bisping and Henderson’s polarizing rematch. 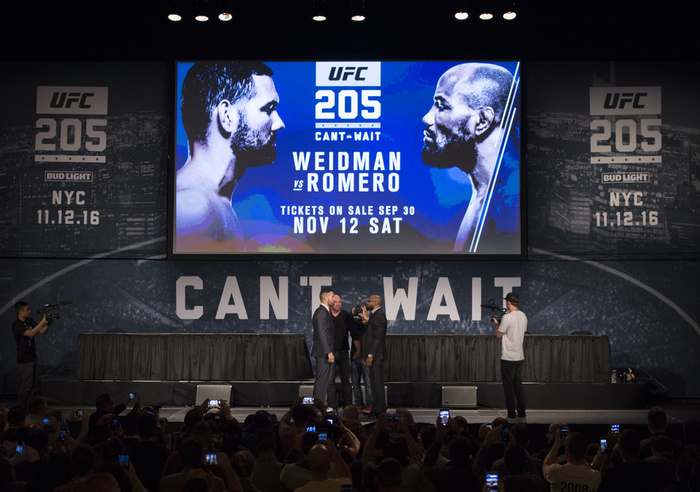 First up, on November 12, Chris Weidman and Yoel Romero will go at on the main card of UFC 205—the massively-hyped card that will mark the UFC’s debut in glimmering New York City. Then, just over two weeks after Weidman and Romero tango, Rockhold and Jacare will go out it in the main event of the UFC’s return to Melbourne, Australia, recreating a 2011 Strikeforce bout, which Rockhold won by decision. Both of these bouts occur in the month after Bisping and Henderson’s October 8 rematch.

What we suddenly have on our hands, then, is something of an unofficial middleweight tournament, which is likely to unfold in one of two ways.

If Bisping evens the score with Henderson at UFC 204, the next title shot will likely go to whomever of Weidman, Romero, Rockhold and Jacare wins most impressively. That is to say that if the winner of one of these bouts wins by decision, and the winner of the other comes out on top with a stoppage, we can probably bet the house on the latter getting the next shot at Bisping’s belt.

The other possible outcome of this unofficial tournament will depend on Henderson beating Bisping a second time, and following through on his promise to retire no matter the outcome of the bout. If he wins and keeps his word, the middleweight throne will suddenly be empty. Yet by the end of the following month, two of the four excluded middleweights will be riding big wins over fellow contenders. What better way to fill the vacant middleweight throne than by pitting these two November winners against each other?

When Michael Bisping and Dan Henderson won big at UFC 199, and the UFC decided to say ‘fuck it’ and book their rematch, it sent a bit of a shockwave through the top of the middleweight division. Yet in booking the remaining top four middleweights to fight in the month after this surprising title fight, the UFC has done a fantastic job of patching up any fractures caused by this shockwave. No matter the outcome of Bisping vs. Henderson 2, the middleweight division’s next title fight thereafter should be quite clear by the end of November.

With McGregor on Board, UFC 205 Goes From Flawed to Nearly Perfect