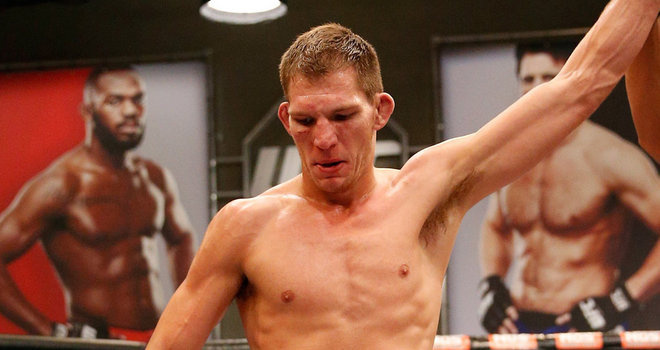 Last night on the second episode of The Ultimate Fighter 17, British kickboxer Luke Barnatt knocked out Gilbert Smith in the second round with a flying knee. Now, conventional wisdom on the show (from UFC President Dana White all the way down to Smith’s less-than-supportive teammates) had it that coach and UFC lightweight champion Jon Jones doomed his fighter and his team by picking Smith, who is five feet nine inches tall, to fight Barnatt, who is six foot six. Fighting another human being is hard enough; fighting another human being who is nearly a foot taller than you is all but impossible.

And just as Gilbert’s teammates, coaches, and boss all predicted, Barnatt picked apart his opponent with jabs and kicks until Gilbert’s questionable cardio gave out and he ran -- head out, hands down -- right into Barnatt’s knee. To most people on the show, the fight was a fait accompli – the inevitable result of a disparity in physical gifts, preparedness, and fighting skill. But no one mentioned Barnatt’s secret weapon: his MMA Mind Power.

Barnatt, it turns out, is a student of Luca Senatore, a Mind Performance Coach whose audio program, The Warrior You, blends hypnosis and sports psychology “to help athletes perform at their very best.” At the center of Senatore’s approach is goal-setting – visualizing your destination (a win, a championship, a payday) as the end of a line that is coming out of your chest “like a road,” running off into the distance. That’s your timeline, Senatore says, “the line of your time.”

Jon Jones said after Gilbert’s loss that his fighter “lost the fight before he got here.” But without Senatore’s help, how could Smith have known what his opponent knew about the intricacies of proper goal setting?

For example, Senatore advises stating your goals only in the positive. You have to move toward something, he says, not away from its opposite. You have to want to win; you can’t want to not lose. It’s a simple matter of linguistics: If you say, “I don’t want to get stuck,” your mind will fixate on the word “stuck,” and you’ll be stuck. Don't believe Senatore? Try telling yourself not to think about a pink house and then don't think about a pink house. It can’t be done.

But while Barnatt was thinking of his goals only in the positive – “All I’m thinking is win. That’s all I have in my head.” – poor Smith couldn’t help going negative: “I can’t fail. I can’t lose. I won’t quit.” Ask Luca Senatore and he’ll tell you Smith was doomed as soon as those words left his lips: All his mind could focus on was failing, losing, and quitting.

Or how about this other MMA Mind Power principle: “Goals should be measurable, not abstract.” Smith spent half of last night’s episode drowning in reality television abstractions; he kept talking about winning for his family, for their love, for love in general. If the key to success is having measurable goals and a clear destination, Smith was in trouble. For thousands of years, poets have been trying to measure love, with no success. To put that kind of philosophical pressure on yourself before walking into a cage fight is tantamount to suicide. While Luke Barnatt, a true Senatore disciple, was focused only on beating Gilbert Smith, Smith was busy contemplating the mysteries of the universe. Turns out that Smith -- like another great contemplator, Sir Isaac Newton, before him -- needed to take a shot to the head before he could gain the wisdom he was searching for.