The Up-and-Comer: The Perils of Being an Amateur 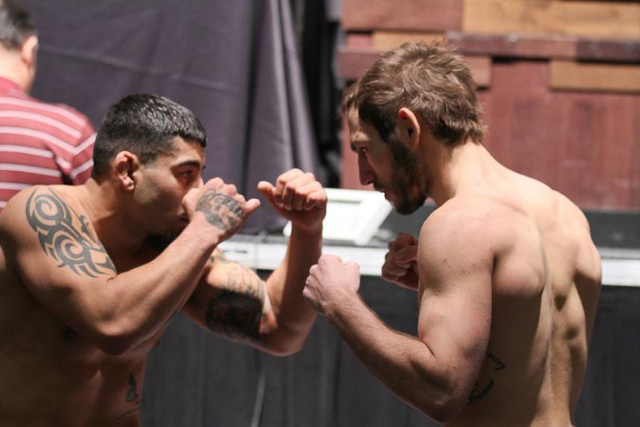 [Ed. note: 21-year-old wrestler Landon Vannata is currently 3-0 as a professional mixed martial artist. Raised in small-town Florida, he now resides in Albuquerque, New Mexico, where he trains at Jackson’s-Winkeljohn’s MMA. We asked Landon to update us every once in a while on what life is like as an MMA rookie -- talented and dedicated but still the new guy at a gym, and in a sport, filled with superstars and killers.]

I had just had my second amateur MMA fight and I was already craving more--searching for that feeling that only comes from stepping into a cage and putting your well-being on the line. Unknown to me at the time, it would be quite a while before I had the opportunity to once again find that satisfaction.

After my fight I took a weeklong visit home to the Sunshine State before returning to the playground, aka Jackson’s/Winkeljohn’s MMA. I was back to training twice a day, six days a week, preparing for any potential fight on the horizon. Soon, word came around of the upcoming Jacksons MMA Series VI event in October of 2011, and I immediately started to lobby for a spot on the amateur side of the card. A week later I found out that I would be on the card and fighting the teammate of my very first opponent. This seemed like it could be fun, as he most likely wanted to get revenge for his friend.

Training camp began and the old tunnel vision set in. The camp went seamlessly, no bumps or bruises. Well, until the final week, that is. Nine days away from the fight, bad luck struck. Sparring during the first round of the day one of my regular partners hit me with a clean lead head kick. It wasn’t a very hard shot, but it was placed perfectly. Thirty seconds later my eye was swollen shut. Immediately coach Winkeljohn began working on it, trying to reduce the swelling as much as possible. I was skeptical about being able to fight at that point. Being so young in the game, and this being the first “mouse” I’d ever had, I didn’t know what to expect. Luckily for me, my eye returned to normal within a few days, leaving nothing but a beautiful shiner behind. The fight was back on. Or so I thought. Less than a week later, the real bad news struck: My opponent had broken his arm in training. No replacement could be found. The fight was off.

When I received the news, I was really upset. But I’m a fairly laid-back kind of guy, so after taking a few minutes to think about it, I calmed down and look for the upside. I was still able to spend time with my family, and now I didn’t have to worry about cutting weight. And what’s a calorie-deprived 19-year-old to do after learning he can eat ad libitum again? How about demolishing a half-gallon tub of cookie dough ice cream in a single sitting. That made me feel a lot better about the situation.

January rolled around. I was now set to fight in the main amateur event on the Jackson’s MMA Series VII undercard, against another tough up-and-comer from Albuquerque. It was being touted as a potential “fight of the night” by the promoter months in advance. I prepared well, improving my striking with the help of coach Brandon Gibson and Grand Master Wink, and I was extremely excited to put these new skills to the test. Fight week rolled around and life was good. Then came the weight cut. I felt like death during the ordeal but somehow managed to push through thanks to some amazing teammates. On Friday my opponent and I stepped on the scale, had our staredown, momentarily hated each other, and then went our separate ways. Ready to go.

I woke up on the morning of the fight feeling fresh and well fed. Then the call came: “Hey Landon, sorry to tell you this, but the commission slipped up and your opponents blood work expired yesterday. The fights off, sorry.”

Check out these earlier chapters in the Landon Vannata story:

Step Up in Competition