The Vultures are Circling for Anthony Pettis 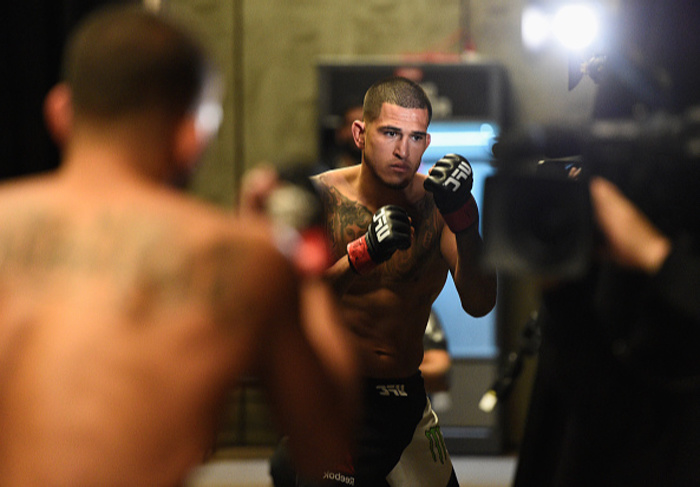 On Saturday night, Anthony Pettis faces far more than the pressures of debuting in a new division under the UFC banner. Should the spectacular striker fail to take a win in his maiden voyage at the lighter weight class, he could be given his marching orders by the UFC.

At the press conference for UFC 181, which would also be Pettis’ first title defense since securing the lightweight championship from Benson Henderson 16 months before, the star of ‘Showtime’ was well on the rise.

Since 1934, popular breakfast cereal, Wheaties, has seen some of the best sports stars in the world grace their cardboard. Eighty years since they started their marketing with athletes, in 2014, Pettis became the first ambassador of MMA to feature on the cereal box.

It was a clear sign that Pettis had begun to transcend into the broader cultural mainstream outside of the MMA bubble, like his fellow UFC proponents Conor McGregor and Ronda Rousey. Not only had Pettis got the clean-cut look, but his leaping, sensational attacks marked him as an outlier in the sport.

At UFC 181, he scored an emphatic victory over longtime lightweight front-runner Gilbert Melendez. Little did he know that it would be his last victory under with the world’s flagship promotion.

No one really expected Rafael Dos Anjos to be able to topple Pettis’ winning momentum, but the Brazilian banked one of the best performances ever seen by a lightweight contender when he took on ‘Showtime’ in March 2015.

Never before had we seen Pettis marched down to the extent he was during the UFC 185 main event. Dos Anjos’ gas tank seemed to be on a completely different level, and his dynamic approach with his striking and grappling never allowed Pettis to get started. Dos Anjos kept the same output from the first bell to the closing bell, which was the main factor behind his decision win.

Despite many thinking he got the better of Eddie Alvarez in his next outing nine months later, Alvarez came away with the win.

Pettis moved over to Jackson’s in the lead up to his next fight with Edson Barboza, but reinvigorated by his training with Mark Henry in New Jersey, the Brazilian taekwondo proponent did enough to claim the victory.

The loss to Barboza was Pettis’ third on the bounce. The unprecedented downward spiral forced his hand with a move down to featherweight, something that we only thought could happen in a super-fight scenario when ‘Showtime’ stood on top of the division 15 months ago.

One thing Pettis has not allowed himself to do is bask in the negativity of his current situation. In an appearance on UFC Tonight earlier this week, Pettis insisted that his only reason for moving down to 145 lbs was to make history by becoming the third person to claim two UFC titles in two different divisions.

“I’m in this organization to be a champion,” he told Kenny Florian and Daniel Cormier. “I feel like at ’55 I lost to the champ, Eddie Alvarez, RDA the (former) champ, Edson Barboza will probably get a title shot.

“I go down to ’45 and I have a whole new path. This is a whole new division with plenty of guys that I can get matched with. I can make the weight. It just made sense for me to drop down and try it out. Two division champ, that sounds good to me.”

While he seems to have the correct mindset going into the crucial bout, there is no doubt that Charles ‘Do Bronx’ Oliveira will provide him with a stern test in the co-main event of the Vancouver card this weekend.

Oliveira is a man who has been constantly on the brink of joining the championship mix at 145 lbs. A well-rounded fighter with sharp Muay Thai striking an impressively technical jiu-jitsu, he should bring forth a challenge that should show us just how far Pettis could go in the new weight class.

Realistically, everybody wants to see the return of the spectacular Pettis that soared to the top of the lightweight bracket after his arrival as the WEC champion. However, we haven’t seen that kind of display from Pettis since he claimed the title.

The vultures are definitely circling with regard to Pettis future with the promotion. Even though he is ‘Mr. Wheaties Box’, and a definite sell for any other promotion who gets their hands on him, it’s likely that another loss, which would make it four in a row, would force UFC’s hand.

That being said, any kind of win will do over Oliveira. The Brazilian has proven how dangerous he can be, and a win would get the fans plenty excited as Pettis looks to climb into the higher echelons of his new weight class.