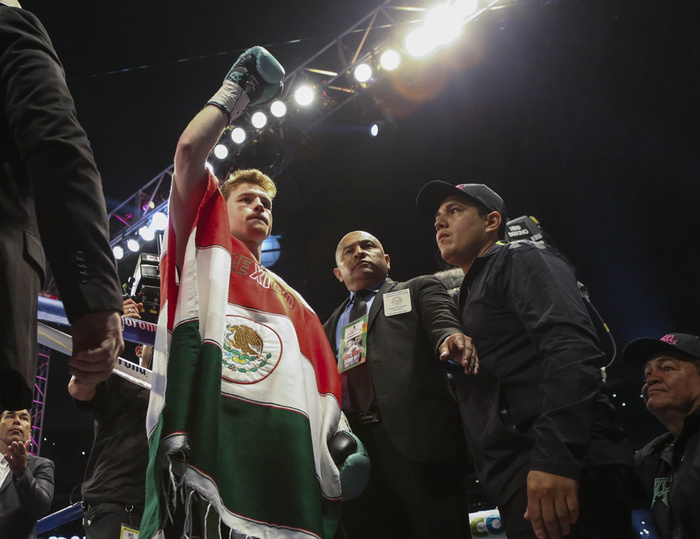 Following public condemnation and criticism from a variety of big figures in boxing, the WBC have been forced to defend their decision to have Amir Khan face off against Saul “Canelo” Alvarez for the latter’s middleweight title.

In fact, not only did the World Boxing Council’s president Mauricio Sulaiman defend the fight, he took to promoting it a la Don King. When was the last time a boxing organisation had felt the need to do that?

Speaking to BoxingScene, Sulaiman said of the fight: “Amir Khan is a very worthy defense. Khan is a former world champion, has extensive experience, has high quality boxing and this will undoubtedly be a great fight.”

What Sulaiman didn’t mention was the fact Khan was a world champion at light-welterweight—three divisions below the weight class he will now be attempting to earn his latest world title as a middleweight. Because of this weight discrepancy between the pair, the contest will actually be fought at a catchweight of 155lbs rather than the 160lbs middleweight limit at the behest of the WBC—a rarity to say the least in most combat sports.

There is a distinct difference between the weight classes in boxing and MMA barring the obvious disparity between the volume of weight divisions seen in both sports. Technically speaking, a lightweight could fight in the heavyweight division at 135lbs—perhaps even two lightweights could face off against each other for the heavyweight belt no matter how ludicrous the idea. The weight limits in place forbid fighters from competing above weight classes they’re heavier than, but there are no minimum weight requirements unlike what’s present in MMA.

Alvarez and Khan’s agreement to fight at a catchweight is what has drawn the ire from fans, pundits and fellow pugilists alike. Surely there are other, more appropriate, fights out there that the WBC could have inked?

Unbeaten IBF and WBA middleweight champion Gennady Golovkin is the mandatory challenger for Alvarez’s WBC title. However, the fight didn’t materialise as “GGG”, a natural middleweight competing comfortably at the weight limit of 160lbs, refused to fight at a compromised weight. A point made very clear by Golovkin’s trainer Abel Sanchez, who said his fighter will not bow to “diva” demands and cut additional weight to face off against Alvarez.

The fight has not long been announced but the issues of weight have already cast a dark cloud over the contest – forcing the WBC and Sulaiman scrambling into retreat. Speaking to World Boxing News, Sulaiman defended the catchweight saying: “The fight is for the WBC middleweight championship and if there is any weight agreement, such is a private contract between the fighters. The division limit is 160lbs, so any weight lower than that is considered as official and within the rules.”

There is no doubting that Alvarez vs. Khan is a big fight. Canelo’s name alone can bring in sky-high pay-per-view figures as his star in his native Mexico was barely affected by his lopsided loss to Floyd Mayweather Jr. Khan is a big name, though not a particularly popular one, in the UK and possesses an entertaining style with a poor chin to match. But, in this case, the fight makes zero sense and it’s clear the WBC were looking to milk the Canelo cash cow by allowing both this match-up and catchweight contest to materialize.

Canelo Alvarez Set to Fight Amir Khan on May 7th

Super Fight Between Canelo Alvarez and Gennady Golovkin in Jeopardy