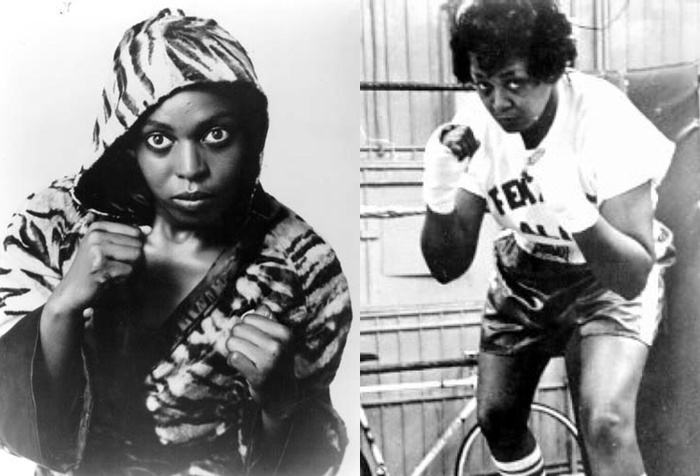 In October of 1974, at the New York State Athletic Commission, Marian “Tyger” Trimiar and Jackie Tonawanda applied for professional boxing licenses. The women were reportedly met with snickers as they went through what was then a routine application process for their male counterparts. Despite the sarcastic comments of some of the men in the audience, Tyger and Jackie were excited, as was the young woman accepting their applications, who said eloquently, “this is where it will start,” with the licensing of these two women. But it was not going to be an easy road for Jackie, Tyger, or any other female fighter looking to go pro in the 1970s. The New York State Athletic Commission unanimously denied Tyger and Jackie’s request for licenses, claiming Rule 205.15 stated that “No woman may be licensed as a boxer or second or licensed to compete in any wrestling exhibition with men.” The chairman of the New York State Athletic Commission, Edwin Dooley, admitted that he believed licensing female boxers would “erode the sport’s image as the ‘manly art of the self defense.’” This is the story of how Jackie and Tyger would fight for their professional boxing licenses while being constantly assailed by institutionalized sexism and chronic, insidious racism.

The New York State Athletic Commission may have declared the fight to be over, but Jackie was not finished with her quest to compete professionally. Jackie applied to the Human Rights Commission in New York for help, complaining that by not licensing her as a professional fighter, the board revoked her ability to make a living. Dooley’s words were part of the lawsuit brought by Jackie Tonawanda to court, which she hoped may help her suit. Dooley claimed that “licensing of women as professional boxers would at once destroy the image that attracts serious boxing fans and bring professional boxing into disrepute.” He also argued that the Commission had a responsibility to protect fighters, and the available equipment for female boxers would be “insufficient to protect them.” Hiding behind this argument of safety and benevolence for the wellbeing of female fighters, the Commission continued refusing to license professional female fighters and they remained in litigation with Jackie for the next several years.

Paul Mitrano, the famous Boston boxing promoter who gave Rocky Marciano his start, felt that the presence of women could increase viewership and interest in the sweet science of boxing. Not everyone agreed with Mitrano. In the wake of the popularity of Tyger Trimiar and other female fighters, two approaches towards women’s boxing emerged. One delighted in the new opportunities for women, while the other decried female pugilists who infiltrated the last bastion of male-only space. The women’s liberation movement was blamed for women’s boxing, and many male journalists made it a point to emphasize their disgust towards feminists and female pugilists. Nick Thimmesh wrote in the Chicago Tribune in 1978 that he felt women’s boxing was “awful” and a product of the same feminist movement that promoted gay rights and abortions. He described the people of both sexes who attended boxing matches between women as either “fools” or into some sort of kink.

The women who sought boxing licenses would stop at nothing for the right to box. Although in the mid-1970s, Maine, Connecticut, and several other states licensed professional female boxers, the state of New York remained firmly opposed to providing women with boxing licenses. By 1977, thirteen states allowed women to box, although California and Nevada did so with strict restrictions: women’s bouts were limited to four 2:00 minute rounds, the fighters had to go through rigorous physical health evaluations, and both women participating in a bout must sign affidavits confirming they were neither pregnant nor menstruating at the time of the fight. After Tyger Trimiar, Jackie Tonawanda, and Claire Piniazik, another boxer, were refused licenses by the state of New York, fighter Cathy “Cat” Davis put in her concerted efforts to lift the ban on female fighters, but not without raising controversy of her own. 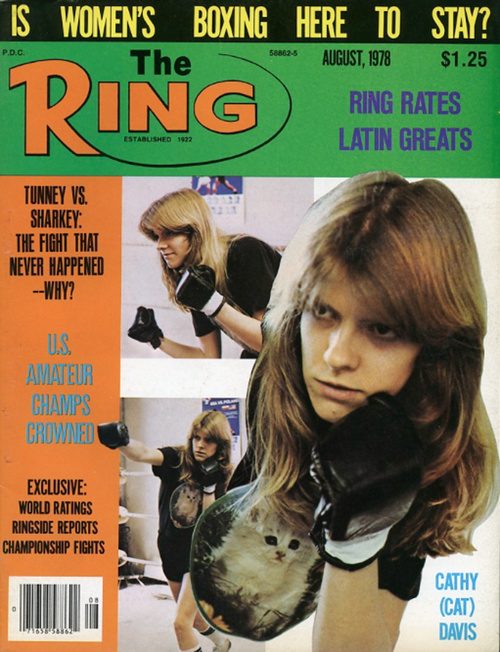 Cat Davis was a twenty-five year old lightweight fighter with fourteen wins and only one loss on her boxing record. She lived with her manager, Sal Algieri, a former fighter with a murky reputation, and the two struck out to create a women’s boxing federation in 1977. Although the federation did not take off, Cat’s career certainly did. She was featured on the cover of The Ring magazine in August 1978 under the headline, “Is Women’s Boxing Here To Stay?” Cat was the first and only woman boxer on the cover of a major athletic magazine until Christy Martin appeared on the 1996 SPORTS ILLUSTRATED magazine. Cat’s aggressive pursuit of professional licensure may have helped Jackie and Tyger in their own fights, but there was no love between the women. Cat was blonde, thin, and stereotypically pretty; she attracted much more attention than Jackie and Tyger, both of whom are African-American women.

In 1978, after numerous lawsuits, the New York State Boxing Commission finally agreed to license professional female boxers. The historic moment was overshadowed by drama between the recipients of the licenses. When the New York Commission handed out the first female professional boxing license, it was Cat who received the first license, not Tyger or Jackie, who had been fighting for licenses years before Cat came on the scene. And this was a source of animosity between the women, especially Tyger, who challenged Cat to a fight in the office of the commission on the day the licenses were finally granted. Cat retorted, “You’ll have to learn to box first,” and the two were in each other’s faces in moments. Although some people felt this spat mere theatrics meant to increase public attention, both Tyger and Cat’s promoters swore that the animosity was long-standing. 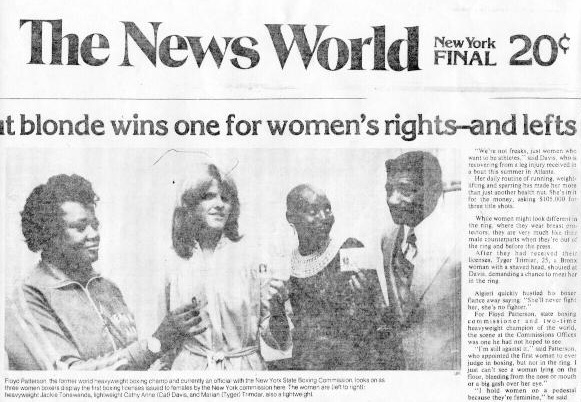 And it is easy to see the case for enmity between Cat and Tyger, both of whose names are of a feline variety. Cat was often described as graceful and beautiful in news stories, while Tyger and Jackie were referred to as large Amazons. In one story, writer Prentis Rogers asks if Cat is the “Great White Hope,” and again, compares her to the Amazonian, black Tyger. Rogers argued that in the era of the unbeatable Muhammad Ali, the only chance for a white boxer to rise above the domination of the black race was, perhaps, in the female division. Rogers also praised Cat’s looks, “In thinking of a woman pro boxer, images of hard-toned, muscle bound Amazon-like women come screaming into mind. But Davis belies that. She looks more like a ballet dancer than a lady whose right hand has cut the lights out on 15 foes.”

Race was, of course, still a major issue in American sports in 1978. The Civil Rights movement of the 1950s and 1960s, undeniable the largest social movement in twentieth-century America, was articulated in the fighting world through various channels. Many states still banned bouts between white and black fighters, although other ethnicities did not seem to come under as much strictures and scrutiny as the fight between the white and black races. Because of these separations, some boxing and wrestling events featured fight cards of entirely African-American or Mexican fighters. In Cleveland, Ohio, in 1962, one wrestling show included “four outstanding Negro girl wrestlers.” Whether Cat Davis received the first professional boxing license in New York because she was white is uncertain, but there is no doubt that her efforts helped lead the Commission toward granting female licenses. But it was Tyger and Jackie who, at the onset, aggressively pursued their love of boxing and made their passion a profession.

Although Cat and Tyger both went on to fight for several more years after receiving their professional licenses, they never faced each other in the ring. Perhaps their biggest fights, after all, were in the office of the Boxing Commission and for that, generations of women can thank them, today, for their legacy.

The Forgotten (Female) Pioneers of Tai Chi in the West