Thiago Alves: Return of the Pitbull 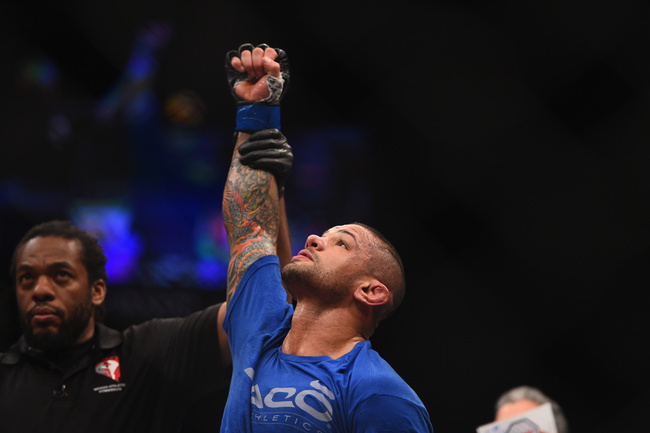 For a long time, Thiago Alves seemed to be the welterweight champion that the UFC wanted. From 2005 to 2008, his sole loss was to the great spoiler, Jon Fitch, and Alves rattled off seven knockouts in that three-year period. Consider that today Johny Hendricks is touted as a KO machine based off of three knockouts since 2011 and you will realize that at his peak Alves was startlingly good at putting men down with strikes.

Alves had bested Karo Parisyan and Chris Lytle by the summer of 2008, and found himself in against Matt Hughes—fresh off of his rubber match with Georges St. Pierre and ready to make a case for a fourth fight. The ease with which Alves stuffed Hughes' takedowns was alarming. Hughes even resorted to pulling guard at several points in the bout. Each time Hughes shot in, Alves would look to time him with a knee. One such knee opened a gash over Hughes' eye.

A final bicycle knee ended the bout. The first leg raise acting as a feint to force Hughes to duck, and the second landing at his new position. A difficult technique, because the weight is committed and the balance is poor if the knee doesn't do its job—giving Hughes a free takedown—but an enormously powerful one.

Perhaps Alves' most memorable performance was his three round pasting of Josh Koscheck. Stuffing every takedown attempt that the wrestler made and punishing him with knees, Alves put the division on notice.

An Aside on the Low Kick

While the takedown defense was what impressed those in the know, his smashing low kicks simply added to his aura. Pumping out a jab or throwing out a combination against the guard, Alves would leap as he pivoted his lead foot outwards, before whipping his hips, knee and shin through the target.

Alves has always excelled more as a counter fighter—slipping blows and landing leaning, partial hooks, or using his forearms to catch-and-pitch counter.

The left hook to the neck will always be a game-changer.

He also counters well in combination, something which is woefully underdone even in professional boxing. The simple counter left hook to right low kick has served Alves well and was the majority of Aldo's output against Ricardo Lamas.

In recent years Alves has moved away from always kicking for power, and now stays over his feet far better. Strictly speaking it's impossible to kick while backing up, but by moving well and stopping at the right times to kick, it's possible to give the illusion that you're doing the impossible.

Notice the distancing. Just far enough away to kick safely, stepping back inside of Howard's swings, stepping out again. Just lovely stuff.

Against Seth Baczynski, when Alves was caught on the edge of the taller man's reach, it was the shorter, sharper counter kicks that did the damage.

When Alves met Georges St. Pierre to challenge for the UFC title, he was defeated. Of course, that's not a reason to write him off, everyone who fought GSP lost. St. Pierre's excellent boxing into wrestling was too much for the Brazilian banger, and each round he dropped he became more desperate.

When Alves low kicks, he tends to kick from an upright posture—where many kickboxers advocate 'laying down' to the rear left side with a right low kick, to put more distance between their head and the opponent. It simply means there is a lower chance of getting hit hard if the kicker and his opponent step in at the same time. Though Ernesto Hoost used to do this in order to kick as his opponent punched—believing it to be the time when they were least able to pick their lead leg up and check.

That is not to say that there is a single right way. Kicking from a more upright posture allows for quicker recovery and punching off of the kick. Watch Andy Ristie or Gokhan Saki throw their lead hook off of low kicks and you'll understand the benefits. Unfortunately, Alves' aggression and upright kicking got him caught against St. Pierre.

But then, that hardly cost Alves the fight. St. Pierre outclassed him from pillar to post—that's just what he used to do.

Returning to the Narrative

Unfortunately, once St. Pierre had soundly drubbed Alves the wheels fell off the wagon. A second loss to Jon Fitch immediately followed, and Alves hasn't beaten an elite welterweight ever since. A 2010 victory over John Howard was followed by a loss to Rick Story, who cut the cage on the sharper striker and brawled him into clinches.

After another victory against Papey Abedi, Alves fought Martin Kampmann in March 2012, with hopes of getting back into contention. Alves slapped Kampmann silly on the feet for the most part, but was stunned by a pair of front kicks to the face. The two scrambled and Kampmann secured a fight winning guillotine. What had seemed like an easy win was flushed down the drain.

What followed next was a two-year hiatus due to repeated injuries. When Alves returned to action in 2014 it was against the seemingly overmatched Seth Baczynski in a match where Alves was troubled by The Polish Pistola's reach and eeked out a decision. When Alves met Jordan Mein in his next bout he was again troubled by the reach, as Mein deceived him with feints and popped him with stiff jabs.

It was only when Mein made the unusual mistake of cornering himself after somersaulting that Alves was able to connect a gut munching round kick to the body and score the knockout and save a bout in which he was being outclassed.

This weekend, Thiago Alves meets Carlos Condit, who is returning from a gruesome knee injury suffered in a bout with Tyron Woodley. The fighters have aged and changed, but the bout is as interesting as it would have been three years ago. Condit is the lengthy kicker, Alves is the stocky counter puncher.

Alves is pretty much proven to have trouble with long strikers when they fight long—the front kick which Condit used against Dong Hyun Kim and the oblique kick which he used to keep Dan Hardy off of his lead foot should be the order of the day for Condit. Yet, Condit has shown himself to be willing to brawl plenty of times in the past, even if his hands are not particularly sharp. Throwing his long, looping hooks he will step in and take one to give one. Sometimes it pays off, other times not so much.

Certainly, if Tyron Woodley's low kicks surprised Condit, he should be expecting them in heaps from Alves—who would not be anyone's first choice of opponent to take following months of rehab from a knee injury.

Both men are good enough that they could hang around in or just outside of the top ten until the day they retire, but as Condit is 1-3 in his last four, and Alves is 4-4 since 2009, this match should give us some indication if either man really has “still got it”.