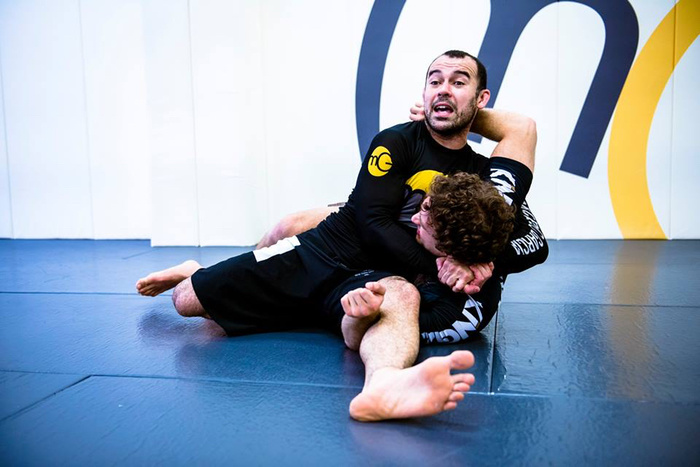 Submissions have become less common in high level MMA over the years. While the rear naked choke against a punch drunk opponent is still commonplace, the knockout or technical knockout is still the more common finish. In fact, looking at the UFC's continued snubbing of Demian Maia and Ronaldo 'Jacare' Souza—the two best submission artists in the sport—you have to wonder whether the management wants it that way. Perhaps the submission isn't as sexy or jaw dropping as a thunderous knockout blow, but anyone who has followed the game for long enough understands how tough it is to catch holds on experienced opponents with any kind of consistency. It fascinates many hardcore fans and for that reason it might well be worth looking at some grapplers who have excelled outside the cage and the innovations they have brought to the constantly evolving game of struggling against other sweaty men.

The most obvious entry to our list, Marcelo Garcia excelled in competition—both gi and no gi—for a decade. Gaining attention at the 2003 Abu Dhabi Combat Club as an unknown twenty year old, Garcia bested the great Renzo Gracie in a match full of X-guard and cartwheel pass attempts. Marcelo went on to arm drag Vitor 'Shaolin' Ribeiro and choke him into unconsciousness before he could even get his hooks in.

Garcia's record in grappling was sterling as he medalled in each ADCC from 2005 – 2011, often doubling up and reaching the podium in the absolute division despite competing at -77kg. In 2011, the last year of Garcia's competitive career, he achieved gold at his weight in both the Mundials and ADCC, the most prestigious gi and no gi competitions respectively.

What makes Marcelo Garcia so fascinating is that he burst onto the scene with a few quirky looks that were unusual at the time—a great sitting guard and butterfly sweeps, arm drags from everywhere, and the uncommon X-guard. But to continue excelling at the highest level of competition Garcia developed dozens of other quirks and innovated much of grappling's modern meta game. Over the years Garcia went from being the guy who always gets the back to being famed for his guillotine (you will doubtless be familiar with the high elbow guillotine which is often termed the Marcelotine), his omoplata and even his razor armlocks. On the subject of razor armlocks, you will probably be aware of the technique and if you train you may have forced a few taps with it, but the consistency with which Garcia has succeeded with this technique is staggering.

Often controlling the elbows from seated guard, Garcia will attempt a butterfly sweep to force the opponent to post on the arm he wishes to attack. Here Garcia uses this set up to attack the arm of a larger opponent in ADCC's absolute division, forcing his man to roll and briefly claiming mount.

And here he demonstrates the same set up against the veteran MMA fighter, JZ Calvan. As Calvan squirms he gives up his back.

Attempting to list all of Marcelo Garcia's innovations and quirks would turn into a multiple part series. But we should touch on just a few of his other habits. His back step passes are a beautiful method of freeing a leg trapped in half guard but just as often take him straight to the opponent's back as they turn into him.

Garcia is known for specializing in the holy trinity of high passes—the X-pass, the knee cut and the smash pass—on one side, and for passing low with the underhook on the other side. The 'deep half killer' position is one which Garcia had much success with against half guard players attempting to get underneath him. It is achieved by allowing the underhook leg to extend and then clearing the opponent's head, while sneaking the trapped knee free. Some folks like Bill Cooper will look to D'arce opponents after countering the deep half attempt, Garcia looks to slap on the seatbelt and take the back. Against Pablo Popovitch, Garcia went straight from defending half guard to attacking the crucifix.

And all of that is without touching on his back takes, his 2-on-1 control, his spiral armbar and his legendary X-guard and single leg X-guard. The man is a marvel who has made unparalleled additions to the grappling game as a whole and there is more footage online of him rolling and competing than of anyone who ever lived. Time spent YouTubing Marcelo Garcia is time well spent and scarcely a week goes by without some high profile MMA fighter making the pilgrimage to his New York gym.

A divisive figure in the grappling community, the stories of Caio Terra off the mats paint him as aloof and socially uncomfortable. While one of the most technical grapplers in the world at any weight, Terra doesn't have the appearance of the traditional athlete. Reportedly Terra's hypoglycaemia has him consuming enormous quantities of confectionary between training sessions and unable to follow a more traditional athletic diet. Terra's mother put him into Brazilian Jiu Jitsu due to his diminutive size and the bullying that he suffered at school and by his own account he did not even want to be there at first. Here's Terra's story in his own words, it's pretty moving.

Terra flies under the radar of many because he has never competed or medalled in ADCC, the most respected no-gi competition. This is because Terra competes at under 130 pounds, a class which ADCC does not have. He does, however, compete and achieve the gold medal each year at the No Gi Worlds.

If you have never seen Terra compete in the gi he does much of what you would expect from a world class roosterweight—berimbolos, coming up on leg drags, turning upside down and other assorted 'flippy shit'. Here is Terra very quickly taking Brandon Mullins' back off a double guard pull, for instance.

But Terra's aggression is what sets him apart. From top or bottom he is constantly seeking the submission and it often results in finishes you never imagined you would see. At Berkut BJJ II, Milton Bastos fought with Terra in his guard for a while, before beginning to work on the skirt of the lapel with a De La Riva hook. Terra immediately high stepped out of Bastos' hook and set to work passing but with a hand in Bastos' collar opted to pass his leg over Bastos' head for a step-over choke while still in Bastos' guard.

Or check out this twenty second victory in the finals of the no gi worlds as Terra goes from being pulled into the deep half guard to choking his man, belly down in an instant.

But it is in no gi competition which Terra looks best, and a number of innovations in his game help this. De La Riva guard is largely a sweeping guard with the berimbolo now being commonplace, and transitioning to sitting guard has always been a competition mainstay. Without a belt to grip for a berimbolo or a sleeve to control for sit up sweeps the De La Riva suffers more than most positions when the gi comes off. Caio Terra's straight foot lock from the De La Riva guard has added a surprisingly effective submission threat from that guard. Here is the technique demonstrated quite clearly in the gym.

And here he is submitting two opponents in less than two minutes combined at a 2013 European no gi tournament.

Terra also plays half guard with a low knee shield. Sometimes called scissor half guard, sometimes called the hip clamp, Terra will often straight himself out away from the opponent and push up on an arm. If the opponent doesn't react he can sometimes wheelbarrow backwards onto them, but more often they will push into him and he will roll under to threaten their back in what has been dubbed a 'G roll' or an inverted berimbolo.

Eddie Cummings is probably not going to be winning the Mundials any time soon. He's a leg attack specialist, specifically the heel hook, so the rulesets of many major organizations strip away the area of the game which he truly excels in. But when he is allowed to compete under a ruleset which permits his favourite attacks, Cummings is something to behold. Cummings ran through most of his opponents at the Eddie Bravo Invitational with the kind of game that everyone either loves or hates: everyone knows exactly what he's going to do, but everyone seems powerless to stop it.

At EBI 7, one of Cummings' opponents even attempted to lay down flat on the floor in order to deny him the opportunity to get underneath their legs. On this occasion Cummings actually wasn't able to slap on a heel hook, but did almost immediately take their back.

Cummings does a lot of his best work from what is sometimes called 'inside sankaku' but what an IBJJF referee would call a 'disqualification for knee reaping'. Cummings' methods for getting there are varied. Sometimes he will get the two-on-one from seated guard and elevated his opponent into a single leg x-guard, other times he will thread his top leg inside while the opponent is attempting to pass. Here, for instance, Cummings elevates his man from butterfly guard, but allows his top leg to fall across underneath his opponent. This might seem like a failed butterfly sweep and a successful start to a smash pass, but Cummings moved straight into his inside sankaku.

There have been a couple of good video studies put on youtube by fans of his game which are well worth having a look at. The man can seem like a bit of a one trick pony, but if a fighter can come up with numerous ways to get to the one ending point, they may not be the most varied but is it really just one trick anymore?

Gunnar Nelson: Fencing Without a Foil