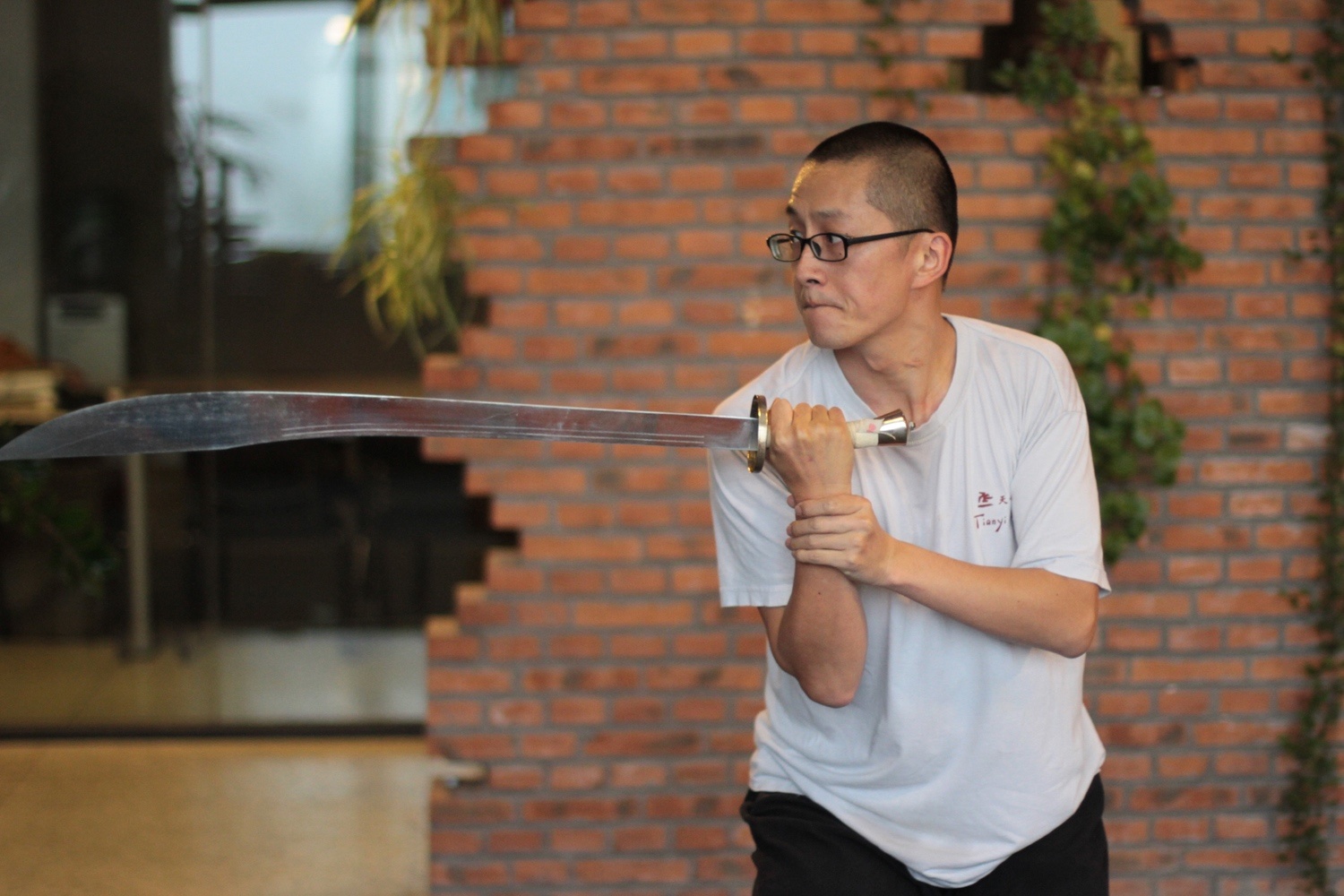 In the north of Beijing on a smoggy day with an Air Quality Index rating of over 200 (classified as "very unhealthy"), four students, two of Asian descent and two European, warm up in a sizable training area in the corner of a tech office. Off to the side, a rail-thin, deceptively limber Chinese man in his seventies quietly observes his students. When he steps before them, they hush and watch his instructions, try to emulate his confident movements and flawless technique. This is a Saturday afternoon at the Tianyi Kung Fu Club in Beijing, where an old Chinese master works with practitioners from around the world to preserve a dying piece of Chinese heritage.

Chinese-Canadian student Da Li is at the front of the class. One of the club's most advanced students, Da is also the founder of Tianyi Kung Fu Club.

Like so many Chinese boys of his generation, Da Li grew up watching martial arts movies, dreaming of emulating heroes like Jet Li in The Shaolin Temple. "Every boy has a fantasy of being a kung fu master ridding the world of evil," he says. He started training martial arts in Canada when he was 18, first studying Wing Chun under the lineage (fifth generation) of the legendary Ip Man. Whenever moving to a new city for work, Da immediately checked out local kung fu clubs. He continued training even while working in Medellín, Colombia in 2001, where, as the only Chinese person in the club, he became a reference point for all things kung fu. "The teachers [in Colombia] would often say, 'In China, this is done like so… Isn't that right, Da?'"

Oddly enough, finding a suitable kung fu club in China, of all places, proved to be difficult. When he moved to Beijing in the early 2000s, Da kept hitting dead ends. Most schools he found taught modern wushu to young children. Some teachers gave informal lessons in parks, but the training systems weren't structured clearly. Da, unable to find a club that taught traditional Chinese martial arts based on a traditional training system, decided to start his own.

Tianyi Kung Fu Club's first class was held in summer 2003, during the height of the SARS epidemic. Indoor activities were banned for large groups for "health reasons," so the club practiced outdoors. Once SARS died down, the club found indoor venues, but issues such as building-condemnation, rent hikes, and scheduling conflicts made it impossible to stay in one spot for very long. Over the years, Tianyi Kung Fu Club has held classes in unlikely places, such as a photo studio, squash courts, tennis courts, a yoga studio, a warehouse, and a high school gym.

Tianyi Club found a permanent home when Da's own company, Deya Tech, needed to move into a new office. Da rented extra space and put the kung fu training area in a generous corner, right near the pool table and opposite the "stage," where the Deya Tech "house band" jams after work.

Now on this Saturday in mid-November, Da and his fellow student, Taiwanese Wu Youzheng, move through forms across the practice space in unison. Sometimes their timing with each other is precise, suggesting all the practice that has gone into their art. Sometimes they're split-seconds off, suggesting all the practice they know lies ahead. Liu Hongchi, an old Chinese master who looks like he stepped out of a kung fu storybook, addresses them at the end of their form, tells them what to fix and how.

Da met Master Liu about 10 years ago. "In our first dinner meeting, I knew I had met the real deal," Da says. He remembers Liu slamming the back of his hand down on the heavy dinner table during a discussion on toughening the body for contact. The deep thud didn't make much sound but raised the plates on the table.

Master Liu was enthusiastic about teaching at Da's new club. He was in his early sixties at the time, having spent the last 20 years coaching at a wushu school. After retirement, he kept up his training and also indulged in his hobby of collecting ancient Chinese coins, much to his wife's disliking. But he missed teaching. At Tianyi Club, Master Liu found a new set of students eager to learn.

Da estimates the club has had well over a thousand students over the years. Some stay for a month, others devote themselves for years. They're exposed to all styles in which the master specializes: Cha Quan, Sun tai chi, Zhang Style kung fu, and Ba Gua.

Liu has been training for more than 60 years. Although you wouldn't know it from the way he effortlessly kicks his leg up higher than his head, he's now 74, having been born in the Year of the Snake shortly before Mao Zedong and the Communist Party "liberated" the people. In his youth, he saw traditional Chinese martial arts go from celebrated to virtually outlawed.

The Communist Party's rise to power in 1949 brought cultural changes that would transform the entire nation, including traditional martial arts. The shifts were gradual. Liu began training at the age of 12 in 1953 in the Shaolin Style, back when it was relatively easy to find masters and learn practical combat applications of Chinese martial arts. As he progressed, however, public fighting competitions were abolished. It was forbidden to teach actual combat. Students were relegated to learning forms, routines, but not how to use them in actual martial settings. Martial arts students could potentially train for years, with little practical knowledge of how to defend themselves if attacked on the streets.

As a boy, Liu heard tales of the "golden age of kung fu," a period around the turn of the century in which martial arts flourished and styles solidified. When Liu started training in the 1950s and '60s, he joined what is arguably the last living generation to have met and been guided by some of the old "golden age" masters.

After nearly 30 years of turmoil under Mao, another cultural shift swept mainland China starting in the late 1970s under Deng Xiaoping. New economic and social reforms were ushered in. In 1980, sanda competitions featuring combat were permitted again. Liu was there to referee some of the first newly legal competitions. Soon coaches and teachers were once again free to show their students practical application of technique.

Anna from Russia and Manuel from Germany practice their routines behind Da Li and Wu Youzheng. Master Liu addresses the class, uses Da to interpret for the non-Chinese speakers. Through Da, Liu tells his students that aligning shoulder blades and pulling them together is crucial, but achieving that, however, requires a strong core. He has Wu Youzheng come up and poke his abs over his baggy pullover. Wu looks suitably astonished at the old master's strength. Da regards his own core, comes to the conclusion, "I need to run more."

Toward the end of class, the four students loosen up with hip circles. "I feel like I'm twerking!" Russian Anna laughs. Modern cultural references may slip past Master Liu, but they do not go unnoticed by Da Li, who spends a lot of time thinking about how traditional Chinese martial arts can maintain relevance in modern society.

It's a struggle. "The golden age [for Chinese martial arts] was at the turn of the twentieth century. It has been going downward ever since," he says, pointing to the increasing importance of economic development in China over the last few decades. "People are focused on getting ahead and making money. Traditional things, especially something that requires so much personal input, are simply not the priority." Da admits his pessimism, calls it inevitable that the knowledge and skills, the heritage and art, of the masters of his teacher's generation will be buried with them.

That's a big reason why Da Li and Master Liu are working together, teaching kung fu to anyone with an interest. "Chinese martial arts has many facets," Da says, listing combat, philosophy, art, and history. "As you progress further, it becomes a process of self-cultivation. You can start to learn and relate elements of Chinese philosophy into it. Philosophy no longer is something from a book but something you practice and experience.

"I am hoping that as China develops economically, people will slow down and realize that there is more than making money. People will acknowledge health, culture, and spirit are important too. The reason I have been running the Tianyi Kung Fu Club is so that people who have this inkling can have a community and a venue to explore it. So this is my small contribution."

Preservation of heritage is one of Master Liu's priorities. Born and raised in Beijing, he watches in disgust as the authorities rip up and tear down the old neighborhoods to make way for "modern" housing developments, office buildings, and malls. For Liu, it's not just old homes that are being destroyed; it's also history and culture. As an aging master, Liu has no say in the destruction of his city, but by teaching the next generation through Tianyi Club, he can sleep better knowing he's keeping alive a piece of his culture.

Together, Da Li and Master Liu are taking it a step further. They have recently begun an archive project, traveling to the Chinese countryside and tracking down old masters, both famous and obscure, to capture their stories and martial art on film. Da reports these excursions as hit-and-miss, as most of these masters are in their eighties, some still active trainers while others confined to beds. During the visits, says Da, "You get to hear stories of the past… Legendary figures, stories of how the masters learned their skills, [what] society was like before it was stabilized… These things are straight out of the movies." Da likens it to a real-life version of 2013's highly dramatized biopic of Ip Man, The Grandmaster (一代宗师).

If the old masters are able, Master Liu and Da Li ask to learn routines and techniques. "Most times, the masters are happy to share," says Da. "They have been forgotten by the passing of time. They get extremely excited that people still recognize their skills and are interested in what they know. When we meet them, they are like old maestros who have been playing music alone and all of a sudden, there are people who have come to learn from them. They appreciate the teaching and the opportunity to jam together."

Da calls it a race against time to find these old masters before it's too late. Liu and Da receive unfortunate news all the time. On those days, Master Liu is extra tough on his own students.

Da embraces it. He and other young practitioners might someday be the ones referred to as masters, with the responsibility of training the next generation.

"Martial arts constantly reminds me how much more I have to learn and how much more I need to train," Da says. "This feeling of inadequacy is also the source of motivation. On days when you sense some minor improvement or when the teacher feels you can move on to the next thing, you get this little bit of satisfaction. This is the kind of satisfaction has no shortcut; you can't buy it, you can't fake it.

"Chinese culture talks about self-cultivation, a process of eliminating the imperfections within, to a point where minor increments lead to transcendence. Martial arts is a vehicle to learn about that."