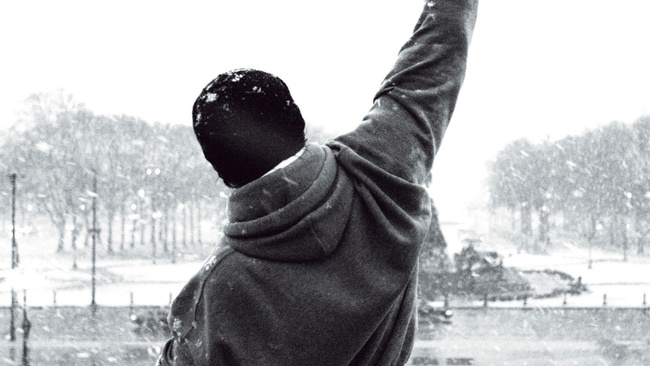 Jimi Jamison, lead singer of the Chicago rock band Survivor, passed away on August 31 after suffering a heart attack. He was 63 years old. In honor of Jimi’s life and work, I’d like to take a moment to celebrate his band’s unique and epic contributions to the fight world.

Survivor, you see, were the kings of the eighties fight film soundtrack. Their popular and populist arena rock sound, complete with guileless, fist-pumping choruses and earnest lyrics about finding inner strength and power, made them the perfect choice for any director or star looking for a theme song for his film about a boxing or karate underdog. And man, did they deliver when they were asked to write a song for such a flick. They came up with “Eye of the Tiger,” one of the most successful singles of all time, for Rocky III. They followed that up with “The Moment of Truth” for the Karate Kid. And then they revisited the Rocky series with the slightly less iconic—but no less anthemic—“Burning Heart.”

Let’s take a closer look at each of those songs:

Sylvester Stallone enlisted Survivor to write a song for Rocky III because he was a fan of some of their previous tunes like “Poor Man’s Son” and “Take You On A Saturday,” and he wanted a theme song for the third Rocky film that had a similar “street” sound (because apparently “street” meant something very different to white people in the early eighties).

According to an interview that guitarist and songwriter Jim Peterik did with Guitar World in 2012 (which is really worth reading in its entirety), Stallone sent the band a video montage from Rocky III to help them with the writing process:

“There were scenes of Rocky getting a little “soft” (doing the Visa card commercials) and Mr. T “rising up” with his Mohawk. It was electric. The temp music they used to accompany the montage was “Another One Bites The Dust” by Queen. I remember asking Stallone why he just didn’t use that song for the movie and he said it was because they couldn’t get the publishing rights for it. At that point I just said, “Thank you, Queen!”

Peterik started working on the opening riff, trying to score his guitar work in time with the punches that were thrown in the montage. But the writing process stalled soon after, because they hadn’t seen the whole movie and felt they needed more to work with.

Eventually, the members of Survivor were able to score a copy of the film. They had one day to watch it.

“At that point, we had become totally enamored in the movie and when I heard that phrase: “Hey Rocky, you’re losing the eye of the tiger” I remember turning to Frankie [Sullivan, also a Survivor guitarist and songwriter] and saying, “Well, there’s the name of our song!” Once we had the title, the challenge became telling the story.”

“Eye of the Tiger” went on to become the second biggest single of 1982 (next to Olivia Newton-John’s omnipresent “Physical”) and one of the most successful singles of all time. It was certified 2x Platinum and earned the band a Grammy for Best Rock Performance by a Duo or Group with Vocal and an Oscar nod for Best Original Song (it lost to “Up Where We Belong” from An Officer and a Gentlemen, a film perhaps best remembered by current generations as that movie that inspired the Simpsons episode A Homer And A Gentleman).

Jimi Jamison was not a part of Eye’s original success—that honor goes to the band’s beret-sporting first singer, Dave Bickler—but he quickly took to the song when he replaced Bickler the following year. YouTube is full of great videos of Jamison performing the classic live over the years. This footage of him serenading a puppet and a man in a jaunty military-influenced suit on French television is the strangest and most fascinating, though.

Jamison’s first order of business as the new singer of Survivor after Dave Bickler was forced to leave due to vocal chord issues in 1983 was to re-record this song for The Karate Kid’s soundtrack with his own vocals.

Much like “Eye of the Tiger” before it, “The Moment of Truth” is a thematically appropriate number perfectly tailored to accompany the struggles of a plucky young fighter working through personal adversity and training to beat a snotty big shot. Lyrical highlights include “If you think you can find the passion/ And you’re ready to take a chance/ If you really believe you can make it/ Then the power is in your own hands” and  “You’re giving it all/ standing along, willing to fall/ if you can do it/ Get up and prove it/ get up and show them who you are.”

And, much like the chords of “Eye of the Tiger” were written to the rhythm of Rocky’s punches, the drum beats of “The Moment of Truth” are synched to Ralph Macchio’s heavy bag kicks in song’s video. It’s a nice touch, and of the most eighties things that has ever happened.

Clearly happy with the success of “Eye of the Tiger,” Sylvester Stallone once again turned to Survivor when it came time to commission music for the next Rocky film. The band responded to the challenge with “Burning Heart,” a song that marries the driving guitars and determination of their previous Rocky composition with a bit of Cold War soul-searching. Inspired by the everyman All American Rocky’s quest against the terrifying Russian machine, Ivan Drago, and all that meant for east vs. west relations in 1985, “Burning Heart” is filled with lyrics like “Seems our freedom’s up/ against the ropes/ does the crowd understand?/ Is it East versus West/ Or man against man?/ Can any nation stand alone?” and “In the warrior’s code/ There’s no surrender/ Though his body says stop/ His spirit cries never!”

“Burning Heart” is often overshadowed by “Eye of the Tiger,” both because Eye was far too big of a hit to ever live up to, and because Rocky IV was not exactly a brilliant movie, even if it did offer a totally plausible solution to the Cold War. But it really is almost as fine a piece of boxing-inspired arena rock as its predecessor, and it wasn’t without its own success.

The song hit number two on the Billboard Hot 100 for a couple of weeks, and reached number one in Switzerland and on the Eurochart 100. It was one of two original songs from the Rocky IV soundtrack to become a top five hit, the other being James Browns’ “Living In America.”

Oddly enough, “Eye of the Tiger” also appears on that soundtrack. So does a piece of the score appropriately titled “Training Montage.”