To Live and Die in MMA: An Interview with Ian McCall 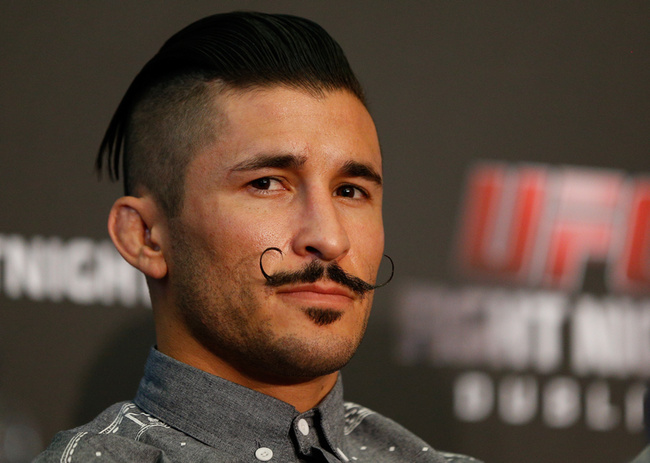 Before becoming an elite mixed martial artist, Ian McCall died. After overdosing on a combination of GHB, Oxycodone, and Xanax, McCall’s heart stopped. He woke up two days later in a hospital, but has since recovered to become one of the top ranked flyweights in the world.

It seemed that nothing would stop him until two losses to UFC flyweight champion Demetrious Johnson left him in a spiral. A further loss to Joseph Benavidez left him on the brink. The last time I spoke to McCall, he hadn’t won a single fight in the UFC, his marriage was ending, and his old demons were threatening to take over.

Fast forward a couple years and Ian has endured again, and is now just one fight away from another shot at the title. He just returned to his home in California from his bout in Dublin, Ireland, where he outworked and outclassed perennial top ten Brad Pickett.

Post-fight, I wanted to understand McCall’s mind-set, where have his past troubles left him and what keeps him fighting. I wanted to know how he kept on his path after the death of his best friend, UFC fighter Shane Del Rosario, and what it’s like to succeed amidst a backdrop of trauma.

Fightland: How was the experience fighting in Dublin, and how do you rate the Irish fans?
Ian McCall: I’ve said it before, the best fans the UFC has to offer at this point in time. I thought Brazil was incredible and Australia was awesome, but the Irish crowd were just incredible. Pound for pound the loudest and happiest. It was definitely an experience. 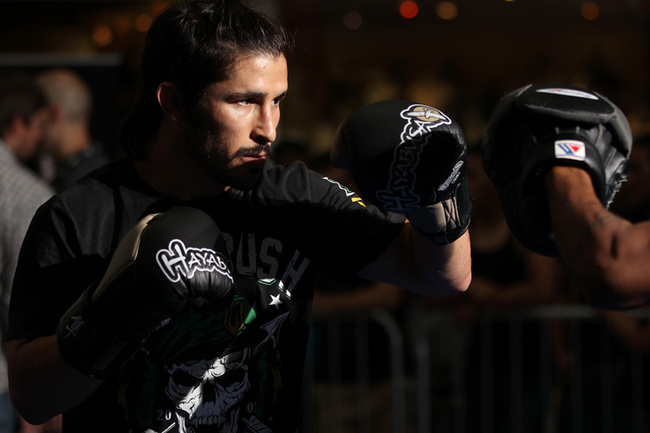 What was your strategy against Brad Pickett?
The strategy was, and the strategy will be from now on, to punch people and to not get punched. I like that strategy and it doesn’t matter who it’s against, I need to take the least amount of damage that I can. I think I’m known for having a good chin, and I don’t mind taking the punishment. But why do it when I don’t have to? Why should I stand there and brawl with someone like Brad when I don’t have to?

You want to talk shit but at the same time, I landed over a hundred punches. You want to say that I ran or that I was running away, well I beat someone who’s in the top ten with one hand. So that’s just him trying to goad me into fighting his fight and you know what? I can go in there and take him down without throwing a single punch and just molest him on the ground. And if he doesn’t like that, well then too bad. I’m going to win and I’m going to embarrass him. It’s pretty simple.

What was it like to win against Santos? Was there a relief to it?
Not really because I didn’t finish him. I didn’t do what I wanted to do. It was a big release. It was an even bigger release when I beat Brad. I still haven’t finished anyone. I haven’t really had that wow factor yet. It’s really been bugging me. 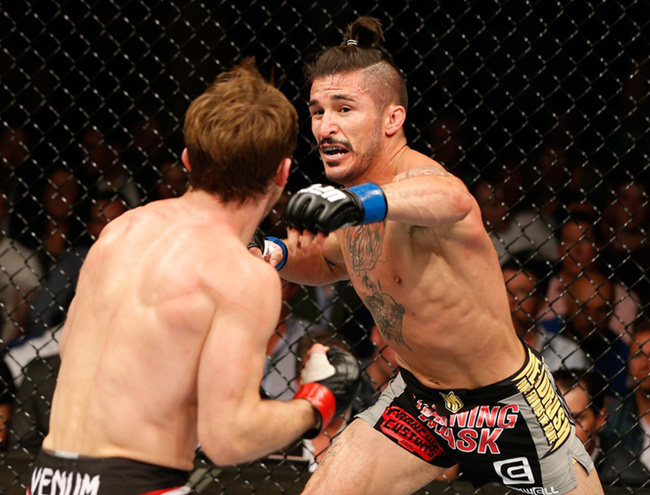 How do you prepare mentally for combat? Do you get rid of all of your emotion?
No, I’m happy. I’m excited and smiling and I don’t give a shit what anyone else says, I’m having a good time. There might be a day where I do get emotional but men don’t fight well off of emotion. Men are too simple of creatures to fight off of emotion. Especially at this level, it’s just not a good idea.

What are your thoughts on Johnson vs Cariaso?
Good for them. People are like, ‘that’s bullshit’or ‘he doesn’t deserve it’and I’m like, ‘quick question, who else is going to fight him?’Demetrious has been a great champion and there’s nobody else to fight. The top contenders are me and maybe Lineker. Who else is he going to fight? It just doesn’t make sense. Let him have his fight, let him get it done. Stay ready, because I got one more win and then I’m going to fight him.

Who do you think will win?
Demetrious will win. That’s no slight on Cariaso. Chris is a smart, good fighter who’s a great kickboxer but Demetrious will beat him on the ground. I don’t see him submitting him, but I can see him taking him down and grinding out a decision.

He is the fastest person in the sport. Me and Dodson are a pretty close second. I think I’m by far the best of the bunch on the ground. Maybe not in pure BJJ or wrestling, but when you can mix up wrestling, jiu jitsu and punches and everything, I know I’m the best. I walked all over Brad. I walked all over Demetrious. I’ve walked all over everybody I’ve fought once it hit the ground. I need to employ that more. Use what’s readily available and that’s my ground and pound and my submission work. 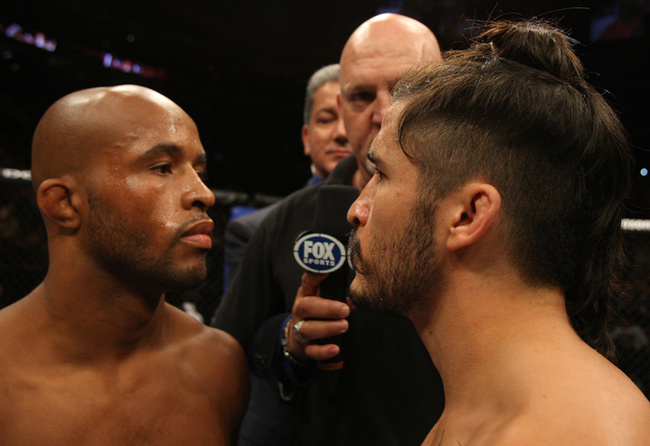 How important is it to you to have another shot fighting Demetrious?
That is the end all be all. That’s all I can think about right now, fighting Demetrious again. I really want to beat up John Lineker first. What’s fair is fair, I don’t mind working for what’s mine. I’ll beat him and I’ll hopefully get a title shot after that.

Chael Sonnen is fighting at Metamoris 4. What are your thoughts on PED use, particularly within your own division.
I think it’s going to be at every level. Bagautinov showed that drugs are at every weight class. The UFC is taking the proper steps to fix that. As human beings, there’s a very shitty side to us. It’s human nature to be bad. To do what’s wrong. Especially to get a competitive edge. Whether it’s money wise or athleticism or whatever. People are always going to cheat. People are always going to get away with it. There’s always going to be a few people that get caught. The whole NSAC trying to ban Chael from doing Metamoris is stupid. Chael won. Granted he doesn’t get to fight anymore, he got caught and kind of smiled and kind of talked his way into a job with them. Vitor is paying their salary is what it is. Vitor gets a slap on the wrist and I get it, he’s taken enough abuse.

In all reality, guys are going to do it in every sport all the time. Let them do it. Who gives a shit? There’s a gap that separates the elite from the good, and very good. A lot of the guys want to cheat and they just want to get into the UFC. They just want to say they’re in the UFC. If they need to do that let them do it. I’ve fought guys on steroids and they didn’t kill me. It doesn’t make you a better fighter. 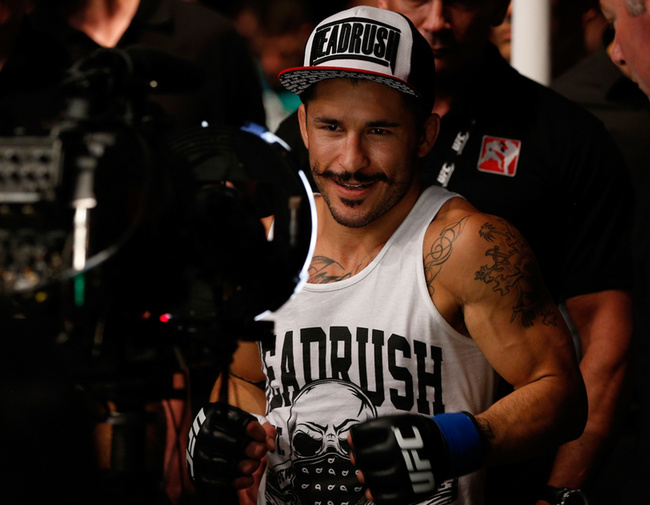 OK, let’s talk about the overdose.
It definitely shaped a big part of my life. I’m a failed catholic. I believe in God to a certain extent because it’s been put into my head my whole life, and I have catholic guilt or whatever. There were no angels, there was no light. Nobody talking to me. I just woke up in the hospital. If there is a god, he probably hates me. I’m not special. Or maybe because of the gifts he gave me he’s going to punish me in every other way possible. It’s a good story to tell to try and get people in the same situation or in similar situations not to do it. If I can change one kid’s life into not doing it, then I’ve changed it for the better. If I can help kids, then that’s perfect.

Your close friend and training partnet Shane Del Rosario died before your bout with Brad Pickett. How did you keep training during this period?
I stayed sober for one. When that usually happens everyone goes on a sick one and has fun and tries to bury it. I tried to stay completely sober to try to show people to be smart. I didn’t even go to Shane’s funeral. That was my best friend. There was so much drama behind it. People trying to fucking blame me and just ridiculous things. I wasn’t even able to go to my friend’s funeral because of fear that I’m going to end up hurting somebody. It’s a daily thing. That doesn’t leave your psyche. What we went through: finding him, CPR, having to deal with all the medical stuff over the month or so. It’s probably the hardest thing I’ve been through in my entire life.

What is your own relationship like with death, and what keeps you fighting?
My daughter. I took this from Enson Inoue. I write letters to my loved ones before every time I fight. I have it tattooed on my arm. Engage in combat fully ready to die and you will survive. Go into combat thinking you will survive and you will surely lead to death. I’m ready to die doing what I love doing. Would I like to? No. It’s a certain code I abide by and I write a letter to my daughter and my dad and my girlfriend before every fight. I tell them I love them and I’m not coming back. I would like to spend the rest of my life watching my daughter grow up. I’d like to be old and senile and have my kids take care of me. If I have to go out on my shield, then that’s what happens.

When do you hope to fight again?
[My hand is injured and] it’s still a mess. It hasn’t closed fully in over a year. I need to have surgery again; the doctors are setting up with the UFC what needs to be done. I’m still doing jiu jitsu every day. November would be awesome.