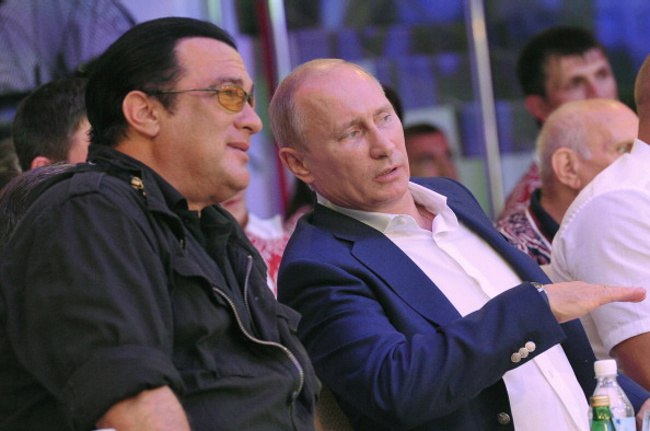 At first blush, the bromance between Vladimir Putin and Steven Seagal might seem a bit bizarre. But they’re not so different, the Russian president and the action star. Both were born in 1952. Both hold legitimate black belts in their respective disciplines—an 8th dan in Judo for Putin and a 7th dan in Aikido for Seagal—and yet both seem determined to demonstrate their hard-earned skills in increasingly embarrassing and questionable public displays in an effort to assert their unassailable masculinity to the world and to themselves. If you’re willing to overlook the fact that one is significantly more dangerous than the other (Putin poses a serious threat to the Ukraine; Seagal merely poses one to good taste) they are essentially one in the same. It was destiny.

According to a 2013 interview with Oksana Bolko of the clearly bias-free Russian news channel RT, Seagal thought as much when the prez first invited him to hang out at his house. “The first time I went to his home, I walked in and saw a life-sized statue of Kanō Jigorō, who is the founder of judo, so I was immediately taken and impressed and sort of really wanting to get to know this man deeper and deeper,” he told the reporter. “He is a student of Asian philosophy, but he’s also a student of, you know, medieval, you know, great leaders and great tacticians. He’s a smart man who studies those people who have amazing results in history.”

That initial moment of statue-induced platonic love at first sight had happened a decade earlier, at the tail end of the 25th edition of the Moscow International Film Festival. As part of the festivities, Putin held a dinner at the Presidential residence Novo-Ogaryovo to celebrate the festival’s international guests. Seagal attended, along with French actress Fanny Ardant and old school Italian cinema star Gina Lollobrigida. 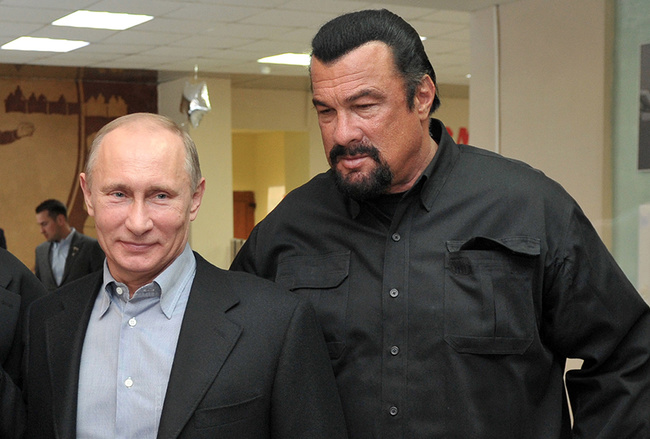 This was one of many ways in which Putin, the former KGB agent-turned-politician reached out to international celebrities in an effort to augment his reputation in the early years of his political ascent. As Max Seddon and Rosie Gray put it in their equally amusing and disturbing breakdown of the Putin/Seagal relationship for BuzzFeed News in April:

“Putin’s unlikely bromance with Seagal speaks to a core tenet of his rule: that political power is star power, and the president is the biggest celebrity of all. Under Putin, politics has become a carefully stage-managed TV show where spectacle takes the place of substance. The defanged parliament is stacked with actors, singers, and athletes. Putin enjoys public adulation more befitting a Hollywood star than a politician. He regularly appears on the cover of celebrity-gossip magazines. His public appearances don’t displace primetime programming: They are primetime programming.

“Putin’s macho persona, fashioned by his spin doctors when he came to power as a virtual unknown, is key to the cult of his celebrity. He channels action movie images in televised stunts that paint him as the emblem of the strong, resurgent Russia he seeks to build. He flew in a hang glider with endangered cranes and shot a tiger with a tranquilizer dart. He took to the Siberian wilderness shirtless, riding a horse, swimming in a lake, and stomping through the Tuvan bush with a hunting rifle. “He plays an action hero as president,” said Fiona Hill, a scholar at the Brookings Institution who co-authored Mr. Putin, a study of his personae.”

As part of this effort to make Putin look more impressive and cool, the Kremlin began courting international stars and flying them over to attend events and hang with the prez. It was basically a slightly less sad version of what Seagal now attempts with UFC stars like Anderson Silva, Lyoto Machida, and Daniel Cormier. Putin dabbled in tough, manly hangouts with a couple of other alpha male movie stars before Seagal came on the scene, palling around with boxer-turned-actor Mickey Rourke and attending bare-knuckle fist-fights with Jean-Claude Van Damme, but nothing compared to what he found with The Glimmer Man.

Seagal was already well on his way to becoming a Russophile when Putin waltzed into his life. His grandmother was originally from the Russian port city of Vladivostok, and his father taught him to speak the mother tongue during his childhood (he confessed in 2003 that he only remembers the curse words now, though). He even helped open a Planet Hollywood franchise in Moscow in the 90s that later became a strip club. But his budding bond with Putin increased both his interest in and visits to the country exponentially.

Seagal is careful not to sound too presumptuous or familiar when he talks about Putin. “I want to be polite and say that I probably don’t know him very well,” he told Bolko in their interview. “I would like to think that I know him well, but suffice it to say that I know him well enough to know that he is one of the greatest world leaders, if not the greatest world leader alive today. He cares more about Russia than anybody I know and he’s not afraid to stand up and do what needs to get done.”

But evidence would suggest that the two are as close as any head of state and fading action star have ever been. The constant chums have made a number of public appearances together over the years, visiting the Russian Judo team before the 2012 Olympics, and relaunching a Soviet-style fitness program called “Ready for Labor and Defense” at a gym together. Seagal has also made a number of solo trips to the country to do things like set up international anti-terrorist talks between US lawmakers and high-ranking Russian officials in the wake of the April 2013 Boston Marathon bombing (sort of like he taught Anderson Silva that kick, if you read between the lines of this ABC News story) and give demonstrations at a Sambo gym.

During a meeting with US President Barack Obama in the summer of 2013, Putin tried to take his political relationship with Seagal to the next level by suggesting that Obama make the action star an honorary consul of Russia in California and Arizona. Putin imagined that his longtime friend could become an intermediary between the two countries, and help to thaw the somewhat chilly and strained relations between the two superpowers.

As BuzzFeed News reported: “Seagal, the martial artist turned washed-up action hero, was just the man to pull U.S.—Russia relations back from the brink, Putin said, according to four current and former U.S. officials. An American patriot through and through, Seagal truly knew Russia too: He was in touch with both his Russian roots—his grandmother was from Vladivostok—and with senior figures in the Russian political and security apparatus. Seagal and Putin had met in Moscow a few months earlier; the two men enjoyed a lunch at Novo-Ogarevo, then visited a martial arts complex. Putin’s spokesman, Dmitry Peskov, told reporters that the two men were longtime friends. That all made Seagal the ideal poster child for friendship between their nations, Putin told Obama, according to the U.S. officials, who spoke on condition of anonymity because they were not authorized to talk publicly about diplomatic matters.”

The US government wasn’t exactly receptive to this proposal. “Our reaction was, ‘You’ve got to be kidding,’” one of BuzzFeed’s sources said.

Seagal did not become a consul of Russia, honorary or otherwise. Thanks, Obama.

It’s unclear what exactly happened to the two men after their Judo, fitness, and international relations-promoting heyday in the earlier part of the decade, and they might not be as close as they once were.

At the time of publication in April, BuzzFeed News believed that the pair’s friendship was “on ice.” A spokesperson for Putin told the outlet that “They don’t really have a chance to talk. I don’t know of any meetings between them recently, or planned for the future.”

And it certainly seemed like Mickey Rourke was set to usurp Seagal’s role as the Russian’s favorite Hollywood star with a somewhat questionable combat background last fall. The country let him hold a totally not fake boxing match there! They might let him have more! He wore Putin’s face on a t-shirt!

At the beginning of May, though, Seagal reappeared in Russia and, presumably, in Putin’s favor when he attended a V Day parade to celebrate the 70th anniversary of Nazi Germany’s surrender to the Soviet Union. In a way, this gesture allowed to him finally become the sort of honorary U.S. representative that Putin always wanted him to be. Most western politicians and dignitaries boycotted the event to protest Russia’s actions in Ukraine, which left Seagal the lone high-profile American to attend the event in any capacity.

Then he taught some more Aikido to another group of unfailingly throwable Russian martial artists and all became right with the world again.