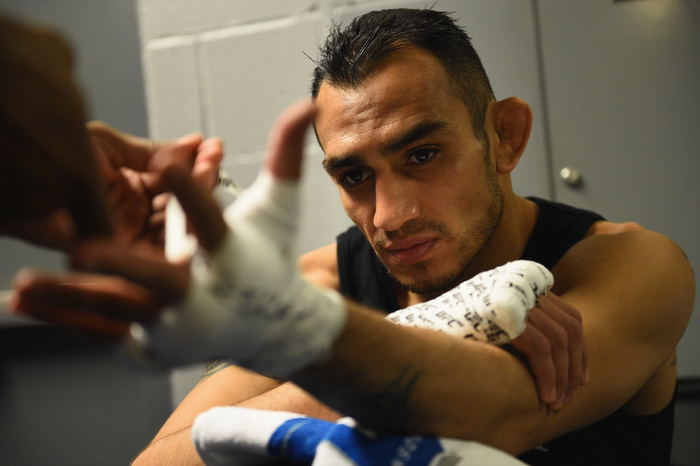 If you have seen a press conference or interview with Tony Ferguson, you could get the impression that he takes himself a bit too seriously. Certainly his insistence that he slipped on the mat against Lando Vannata (conveniently coinciding with being kicked in the head while on one leg) rubbed a lot of MMA fans the wrong way. But load up any Ferguson bout on Fight Pass and all will soon be forgiven. Fighting is a very serious business in that you can die doing it, but it is also a damn silly game. Ferguson's fights are spectacles of aggression and violence and attempts to render the other man unconscious, but they also show a fighter who has the confidence to do outlandish, silly things just for the sake of doing them or in order to have fun.

Ferguson has always been happy to throw himself to his back, or jump in with a flying knee on a whim, and has had success seemingly in spite of himself. Against Josh Thomson, Ferguson would perform a roly poly after showing his back or getting a leg caught—as happened far too much in that fight to make any coach feel comfortable.

It doesn't seem as though Ferguson will ever abandon the peculiarities of his style but perhaps that is for the best. When a new coach gets a hold of a fighter and starts trying to edit out the quirks of his game, he can end up removing something of what makes him special. In Ferguson's opponents the anticipation of erratic behavior can inspire hesitance and even passivity. The willingness of a fighter to throw himself to his back and work with the utmost confidence from there can also have the strange effect of putting opponents off pursuing the takedown, even though confidence alone does not win fights from the bottom and Danny Castillo had decent results holding Ferguson to the mat.

The two greatest strengths of Ferguson's technical game are his loopy but unnervingly accurate straight punches, and his snap down and front headlock game. The snap down is an underrated method in mixed martial arts and even in submission grappling because they aren't altogether common from the clinch. Let's pause here to recall the beauty of Minoru Suzuki's catch wrestling, which we examined last week.

The beauty of the front headlock, however, is that there are plenty of other ways you can get into it. In submission grappling, Baret Yoshida has had great success performing a quick technical stand up from his guard, and snapping the opponent down into a front headlock while they are still on their knees. Rafa Mendes also utilizes this method in no gi competition. But in MMA, Ferguson is showing the value of boxing into the wrestling game.

When we discuss 'mixing boxing and wrestling' the mind instantly goes to the notion of boxing into takedowns. This is a very, very valuable element of the game and not enough fighters do it well. But what we mean in Ferguson's case is his use of punches to draw the opponent into his front headlock. Whether it be by boxing the opponent up until they make a poorly judged shot at his hips, or throwing punches down on his shorter opponent until they begin ducking forwards at the waist to avoid some of the blows, exposing them to the front headlock.

Lando Vannata gave Ferguson a hell of a time in the first round, weaving underneath Ferguson's punches and coming up with counters, but later in the fight Ferguson began to bring his weight down on the back of Vannata's neck as he slowed down in these weaves and was able to attack guillotines and even a standing D'arce choke which finished the bout.

This is simply an extension on one of the oldest dirty tricks in the boxing book. When an opponent is leaning forward at the waist, the forearm goes across the back of their neck ('placed', 'dropped', or 'slammed down upon' according to the fighter's preference and dirtiness) and the weight is dropped on the ducking fighter so that he is force to hold himself up and tire himself out. Men like Floyd Mayweather and Vasyl Lomachenko also love to throw the opponent underneath their armpit and crack them with the power hand as they stand up.

The D'arce is a technique of ludicrous utility which has been finding more and more place in the UFC in recent years. It is certainly Ferguson's 'money' technique, and by that I mean that he has completed almost a fifth of all D'arce choke victories in the UFC and has threatened it in almost every UFC bout he has had.

Aside from the Vannata fight, which was against a last minute replacement and so an unexpected switch up for both men, Ferguson has been looking better and better in his recent UFC career. His victories over Josh Thomson and Edson Barboza were by far the best work he has shown in the cage and while elements of Ferguson the wildman were present in both, they showed a good deal of strategic thought. Against Thomson, long body kicks winded the veteran and allowed Ferguson to put together combinations of unanswered punches later on.

Later, Ferguson was able to land punches far more freely, but also found success in smothering Thomson's hands and stepping in with elbows. A Jon Jones classic, this really benefits longer limbed fighters as their elbows will have a couple of inches over their opponent's and where a longer fighter can expose himself more by swinging punches from close range, a fighter can fold in nicely behind his elbows to protect himself—Jones often does this but Ferguson can get reckless with his.

Ferguson's finest performance was against Edson Barboza, however. It wasn't the body work so much as Ferguson's relentless pressure which did the Brazilian in. The act of rapidly retreating and the act of getting on one leg to kick do not go hand in hand. By constantly advancing, flustering the kicker, and keeping Barboza from setting his feet, Ferguson avoided almost all meaningful punishment from kicks. It wasn't pretty, but it was an example of a performance built on principle rather than technique, and it was perfect to do the job against Barboza.

There was room for craziness, Ferguson perfectly hid an upside-down shot on Barboza and with an illegal upkick reminded us all how much more fun this sport would be if you could kick from anywhere.

But Ferguson's bizarre yin-yang boxing got him caught a lot too. One side of Ferguson's body, the side committing to offence, is always doing lovely work, but his other arm dangles by his side and exposes him to counter punches.

Slicing Barboza's face wide open with a beautiful up elbow, Ferguson immediately stepped in to try another and Barboza met him with an elbow of his own. Within three seconds of each other both men were pouring blood.

Barboza ultimately panicked under fire and went for a poorly timed shot which turned into a scramble and ultimately into a Ferguson D'arce.

Perhaps the most interesting thing to consider regarding Ferguson is that while he larks about in the cage, he takes his job extremely seriously and is one of the few fighters in the UFC who has built his training camp around himself as a high level boxer would. In an interview with Ariel Helwani, Ferguson remarked that he doesn't train with any other UFC fighters and hasn't attended a class in years. In the most recent episode of Eddie Bravo's Mastering the System, viewers can see Bravo training specifics with Ferguson in Ferguson's house in Big Bear. While a far cry from the huge gyms of Jackson Winkeljohn and Black House, it is a camp entirely kitted out for and operating around one man. Whether or not this style of preparation will ever catch on extensively in MMA, Ferguson's approach is working for him at the highest level of the game and proving the viability of the training camp as an event rather than a stable of fighters.

Next week we will be considering how Ferguson matches up with his next opponent, Rafael dos Anjos. Dos Anjos is a furious pressure fighter, though slower and more methodical than Ferguson and certainly a more disciplined ring cutter. There are a ton of factors to consider: from Ferguson's tendency to give up the center of the cage by lunging past opponents, to Dos Anjos' distaste for the front snap kick when a few of Donald Cerrone's hit him in the belly, to Ferguson's tendency to drop his non-punching hand and eat counters. Their approaches are similar when boiled down to a single buzz phrase like 'pressure fighter' but their methods are very, very different. It seems as though we might be in for a game of chicken where one driver is swerving all over the road and laughing his head off, and the other is stoically looking through the other car. Get back here next week and we'll talk about the match up specifics.