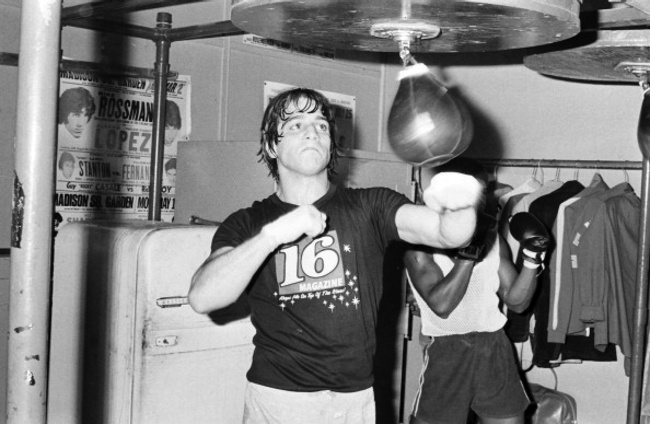 Photo by The Ring Magazine

Long before stage and screen actor (and beloved misheard lyric subject) Tony Danza even considered a career in acting, he was, well, showing people who the boss was on mats and in rings all over New York and Iowa.

As a teenager, the Long Island native was a bit of a troublemaker, and wrestling was one of the things that kept him in line. He was good at it, and earned a scholarship at Iowa’s University of Dubuque. That was where he first fell for the sweet science (and failed to entirely stay out of trouble).

“There he boxed, not varsity but on the streets, he says, and did great because ‘they weren’t used to New York rules,’” People Magazine’s Mark Donovan wrote in a 1979 profile on the actor.

After earning his bachelor’s in history at Dubuque, Danza returned to Long Island and spent a few years drifting between various gigs as a bartender and a mover before an argument with his mom inspired him to turn to Golden Gloves boxing in 1975 in an effort to give his life some direction. His start in sanctioned pugilism was promising: he won his first five amateur bouts by knockout. “Then I ran into a guy who knew how to box and woke up in the shower,” he quipped to People. 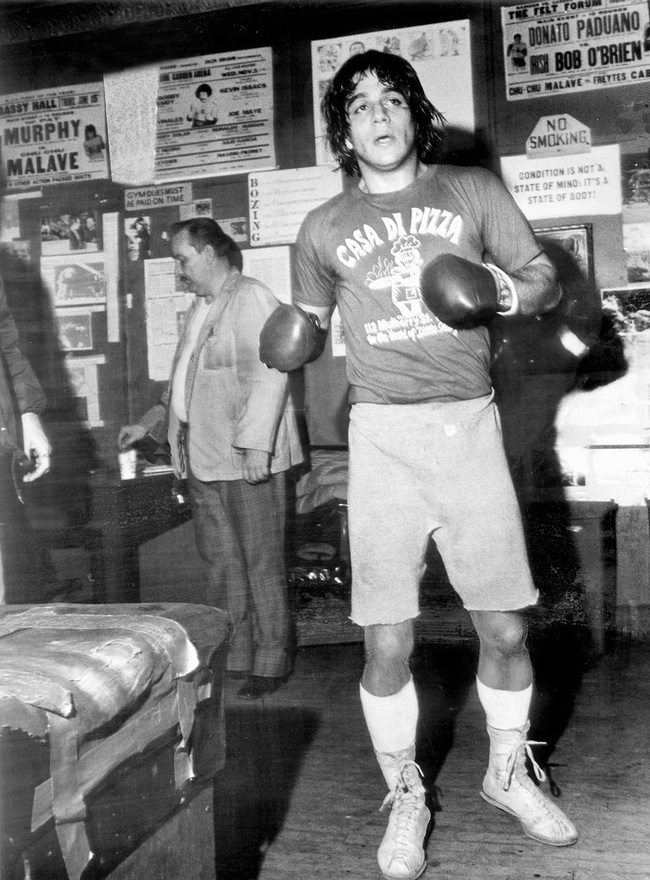 Undeterred, he kept training under Chickie Ferrara at the famed Gleason’s Gym and turned pro in 1976. He quickly made a name for himself—as either Tony “Dangerous” Danza” or “Tough” Tony Danza, depending on the card—as a knockout artist to watch on the New York club scene. But boxing fans and promoters weren’t the only ones keeping an eye on Tony. In 1977, a TV producer named Stuart Sheslow walked into Gleason’s looking for a fighter who could play a boxer-turned-aerobics instructor on a show that NBC was producing. He liked the look of Tony, and asked for his number. A hooker named Ana Rosa who used to hang out at the club gave it to him. (“Why she had my phone number, that’s another story we don’t need to get into,” Danza told Deadline when recounting the story last month). Sheslow called, and Tony read for the part, but his mind was on other things.

“I had a fight coming up, I was stressed only about that,” he said to Deadline.

Danza called it “the worst screen test anyone has ever seen,” in his 1979 People profile, but it impressed a couple of NBC executives enough that they decided they wanted to watch his next fight.

Danza recounted that debacle in fascinating detail to Deadline:

“There was another complication,” he said. “See, I’d had trouble getting fights and I recently signed on with this new manager, his name was Cha Cha, and…well, Cha Cha had some friends, you know? They were coming to see me fight, this little group of wiseguys and the TV guys. So I’m fighting Rocky Garcia, the State Champion of Connecticut. Bell rings. I want to look good, but this guy’s got a crazy weird move. It looks like he’s throwing a right but he throws a left hook instead. I brace for the right and lean right in to the left hook. When you get hit with the right, you go down. Get hit with the left hook, it throws you up in the air and you land on the back of your head with your feet up. It’s the most embarrassing thing that can happen to you. I get knocked down and I was so fucking pissed I jump to my feet. I get up, move around the ref, I’m gonna knock this guy out. And he hits me with the exact…same…punch. First time I got knocked down, all I could think of was the TV guys and being embarrassed. Now I’m sitting there again, and I’m more hurt than embarrassed. And this guy just beats the shit out of me.

“I’m following him around the ring, because I must have been in never-never land and he throws this right, I see it coming but I don’t move. If I go down, that’s three times and the fight’s over. Something keeps me up. And by the way, all this is in the first round. So with 15 seconds left in that round, we both throw right hands. Mine gets there first, and I knock him out. Hit him flush on the chin. You can see in the film, I walk over and apologize to him, tell him he had me. The mafia guys are thrilled, and Sheslow says it’s the greatest thing he ever saw, that nobody would believe it if he’d scripted it. They didn’t make that show, but this was the moment my life changed, because I got hit, the whole world slows down; this guy is breathing fire and screaming for me to get up. The ref had almost counted me out and somehow I keep going and land the punch and win it.”

Danza won both the fight and the attention of a director named Walter Hill that night. Along with his producers, Larry Gordon and Joel Silver, Hill began considering the boxer for a role in their next film, The Warriors. Danza auditioned for them, then invited them to watch his fight against a man named Bill Perez.

Danza and Perez weren’t particularly fond of each other, and the animosity is palpable in the footage of the fight. The announcer barely has time to explain that “The opening round is usually the feel-out round where they feel each other out,” before Tough Tony lands the first of many devastating blows. “But evidently Tony Danza doesn’t feel like feeling anybody out,” the announcer continues as Danza punches his way to yet another KO victory.

Danza recapped the fight in that same Deadline story:

“They sit through five boring fights, and then I’m fighting this guy named Billy Perez, and Billy and I don’t like each other,” Danza says. “We yell at each other and ran to the center of the ring where he hit me a couple of good shots, but then I connect with the left hook and I just kill this guy, knock him through the ring ropes into the first row. We’re in Brooklyn, and I am king, just walking around like King Kong and my eyes meet Larry Gordon, who’s standing on the floor in my corner and who says, that’s the greatest audition I’ve ever seen.”

They offered him a role in The Warriors but, but NBC was still courting him for their show. After much thought, Danza turned down the soon-to-be cult film classic and accepted the role of a boxer named Tony Banta on the soon-to-be-classic James L Brooks show Taxi. 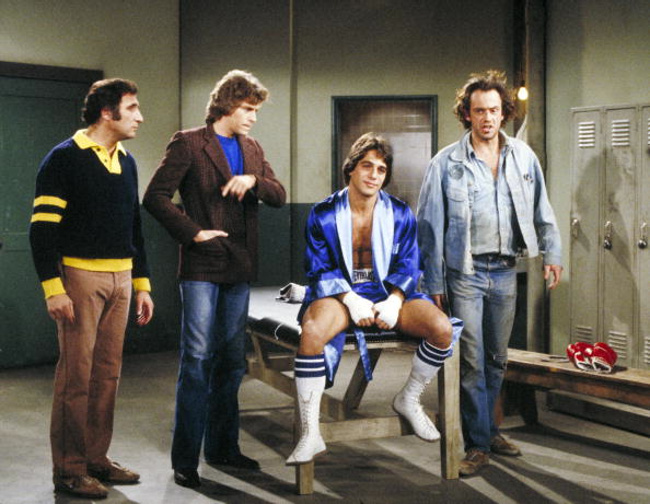 Danza continued to train (and help some guy named Robert De Niro prepare for Raging Bull) while shooting Taxi in the late seventies and stepped back into the ring for a fight against Max Hord at Madison Square Garden’s Felt Forum on April 27, 1979. Rob Reiner, Penny Marshall, most of his Taxi co-stars, and a writer from People were in the crowd as the boxer/actor scored another KO and increased his pro record to 8-3.

After his victory, Danza, who already had another fight in Phoenix scheduled for the following week, told People that he had big plans for his future in both boxing and acting. “I want to be champion of the world,” he told them. “And win an Oscar.”

Danza retired from boxing after the Phoenix fight, one last KO that gave him a 9-3 record but did not quite earn him a championship title. He might not have an Oscar yet, but he’s enjoyed significant success on film, television, and Broadway, most notably as Tony Micelli on the eighties childhood staple Who’s The Boss?

Although he’s only boxed for fitness since he hung up the gloves in 1979, the sport remains a positive influence on his life. Boxing, he told People, was a lot like acting in some ways. ‘They both involve hard work, good times, camaraderie... agents and managers.” It also helped him prepare for the hustle of the great white way.

His previous career became particularly handy when he took over from Sylvester Stallone as host of the boxing reality show The Contender in 2008. 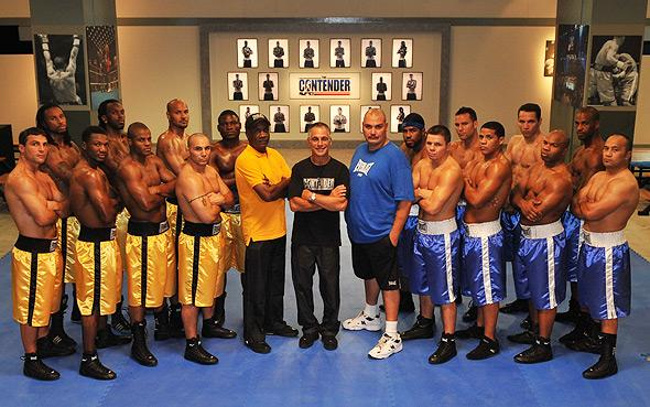 “I’m not sure Sly understood what it meant to be a club fighter,” Danza told Vulture about his predecessor on the show, adding that he was going to help the show focus on the competitor’s fights to survive as struggling boxers as well as their fights, because he’s been in their position and remembers it well.

Shooting the show inspired him to jump back into the ring, maybe against his better judgement. “You know, boxing is very addictive, and it’s so funny because I got away from it, but the minute I was in that gym, I was hooked again. Oh man, I gotta box. I boxed guys 40 pounds heavier and 30 years younger.”

When Vulture asked if he fought the shows, contestants, the man once known as Dangerous Danza responded with an enthusiastic “Oh yeah, I had to. I had to! You get in a gym and you can’t really help it. I’m way past the point where I should be in the ring, ‘cause I’m old, but it was really fun.”

And when Vulture asked if he regretted leaving boxing when he did, Tough Tony turned philosophical:

“Yeah… I guess so. And I tried after Taxi to come back and fight. I thought, Maybe if I’m lucky, I’ll hit somebody in the chin, and then I’ll have a series of fights and I’ll be champion of the world! Big dreamer. But I came back and I wasn’t the same guy. I was worried about getting hit in the nose! And you can’t worry about stuff like that. And I have to say, maybe because of going back and doing this show, sometimes I’d be thinking here and there myself—you know, I really did think I could have done it, I really think I could have been champion of the world. And I’ll be honest with you—this is hubris probably, and we all become better fighters once we quit — but I was watching the guys, and I was watching a lot of fights, and now I’m back into it. And yeah, I think I could beat a lot of guys!”