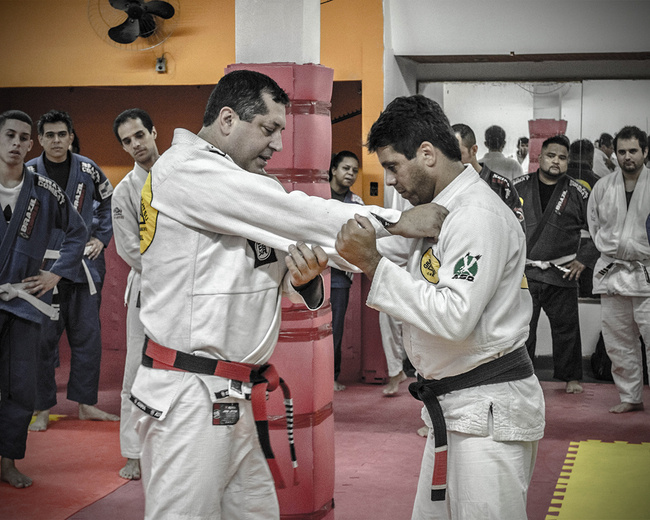 Dissecting the Gracie family tree is no easy feat. The task is much like trying to understand a complicated chemistry formula or unravel the relationships in a complex CIA operative, but weaving through all the brothers, sons and uncles, you inevitably arrive at two names: Carlos and Hélio Gracie, the fathers of modern Gracie jiu jitsu and founders of the legendary Gracie Humaitá academy in Rio de Janeiro.

Now perhaps equally challenging is determining the true and accurate origin story of Gracie jiu jitsu, though what appears to be agreed upon is that Carlos opened the first Gracie Academy in 1925, and later as a result of a joint venture between Carlos and Hélio, the famed “Gracie Humaitá” was formed in 1952. The list of legends that have trained at Humaitá is a long one, from UFC co-creator Rorion Gracie to 6-time world BJJ champion Saulo Ribeiro, so it’s safe to say that Gracie Humaitá has acted as a major building block to the sport. Since its inception, the academy has spread worldwide, with locations throughout all parts of the Americas, Europe and even Africa.

While the original academy is still located in the “Humaitá” neighborhood of Rio, satellite academies have sprung up all over the city, and it was through that proliferation that I found myself training at Gracie Humaitá in the center of Rio de Janeiro. Currently, the club is led by Rolker Gracie, a 7th dan coral belt and the 4th son of Hélio Gracie. Training since the age of six, Rolker boasts an uninterrupted 44-year career in the sport and has been in charge of the Humaitá academy for over 20 years, with the Centro location opened for a little over a decade. 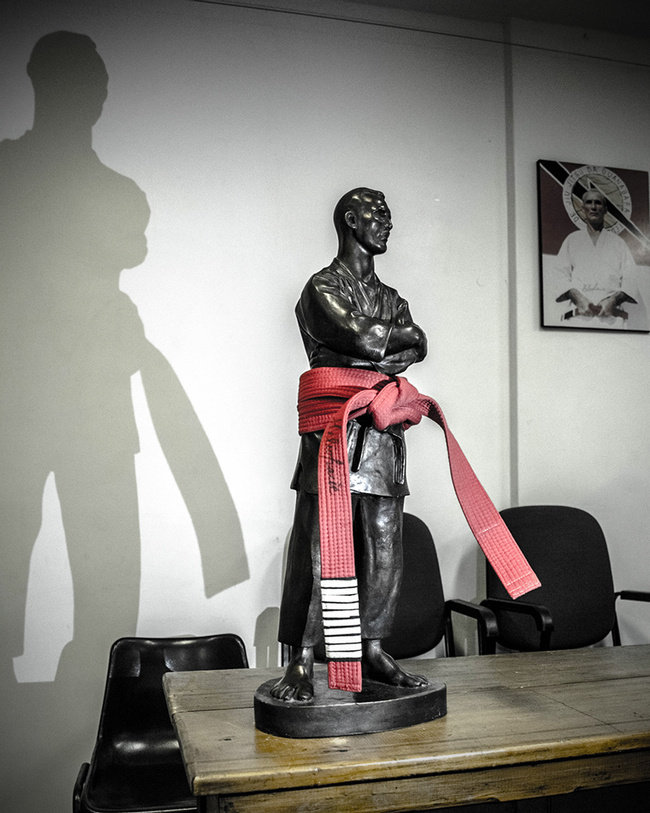 “We’ve been here [in Centro] since 2003, so about 11 years. For me it’s a great pleasure because the students here at the Centro location are different from the Humaitá academy,” said Rolker when I asked him about the school’s history. “I like [Humaitá] too, but it’s an academy that has a lot more youth, a lot of kids, which is good, but here there are more adults, more veterans. Here few people study or have university degrees. Here people work, so I need to have a different approach for the different students.”

The demographic differences are apparent, as it is common to have at least half the room full of black belts and people coming in on their lunch breaks to train. With four different operating hours throughout the day, the Centro academy is fitted for those that have busy day jobs and accommodates just about any work schedule possible. Sessions are primarily composed of sparring, otherwise known in jiu jitsu circles as “rolling”, and while there might be a few minutes of drilling and formal teaching, most of the time participants get right down to business, learning from trial and error, and from teammates stopping to show what is being done wrong, and how to fix it. Despite the plethora of medals and trophies that decorate the academy wall, the gym isn’t necessarily focused solely on competition. Instead, Rolker stays true to Hélio’s original intention of using jiu jitsu as a self-defense tactic.

“Academies aren’t only for competitors, friend. The Gracie academy is multi-purposed. It’s for all the students that want to learn jiu jitsu, whether it’s for self-defense or for competition. We’re for everyone,” Rolker tells me. “My goal is to divulge Gracie jiu jitsu, always. If a student is in a street fight, and jiu jitsu saves his life in one way or another, I’ve already passed my goal.” 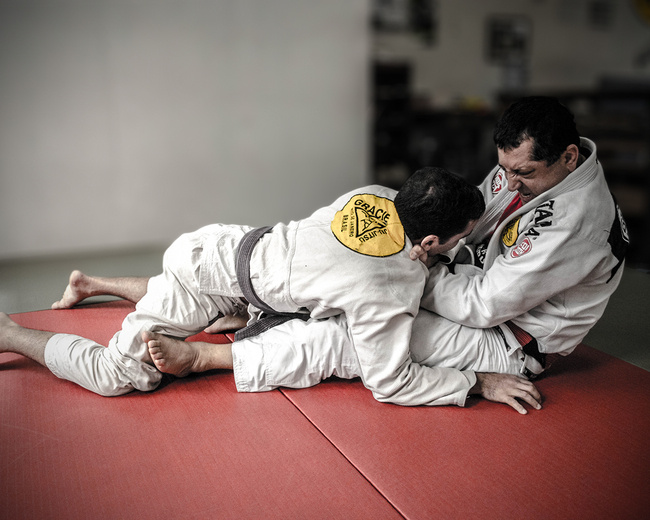 Rolker is what I would consider a rather serious person; in fact he denied my initial request to start training, stating that my affiliation with Gracie Barra back in the United States would cause problems. But after explaining my living situation and the obscene bus ride it required to train at the Gracie Barra location in Rio, he then crooked one eyebrow and asked me two questions: the color of my Gi and a confirmation that it wasn’t black. After a brief preliminary roll with one of the academy’s more established black belts, I was allowed onto the mat.

For the next week I was getting my ass handed to me by literally everyone in the gym, down to even the white belts, but after a few days of this repetition, people started treating me differently. They began stopping and showing me how to defend, how to attack, how to survive a little longer. In jiu jitsu, the seconds matter. If you can last a few seconds longer than the last time, that’s an accomplishment. In the end it’s not really about winning or losing; not losing as badly is good enough.

Jiu jitsu puts you in this strange state-of-mind where you are completely aware of your surroundings and the present moment, mostly because if you aren't, you're soon in some position that you didn't think was physically possible beforehand. You learn about human anatomy, pressure points, the way joints are supposed to bend and the way they’re not. You also learn a lot about people. Anyone from lawyers to restaurant workers show up to the gym, and I’ve rolled with people of all ages, genders, shapes and sizes to realize that quite literally, anyone can do it.This changes your perspective in dealing with the rest of the world. Now every time you step out on the street, anyone could be a competitor or a teammate, and you treat them as such. The point is, jiu jitsu teaches you how to respect life outside of training. 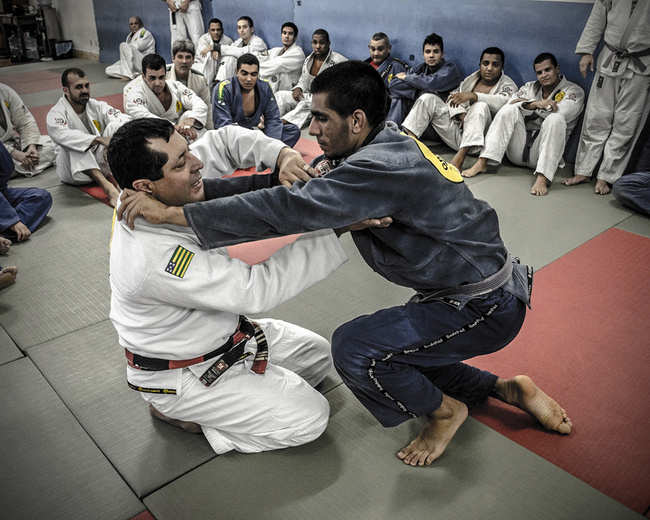 “If you want to become a great fighter, start early, train everyday, and have a strong group of people to train with,” says Rolker when asked about the keys to becoming a complete jiu jitsu fighter. “I grew up with Royler, Rickson, Royce, Renzo, everyone training together. This is the secret: have a group to train because everyone gets stronger together.”

I’ve celebrated news of grandchild births in the back locker room and shared plenty of laughs on the mat to see the team building approach alive and well at Gracie Humaitá. One of the best stories circulating around the place is about one of Rolker’s first students, known around the gym as “Mestre Fred”. I don’t know too much about “Mestre Fred”, aside from the fact that he’s a 74-year-old black belt and has one of the kindest demeanors I’ve ever seen, but I did once hear that he’s one of the only people to earn a black-belt twice – the first time being of the standard 11+ years of training, then after a substantial exodus from the sport, returning and going through all the ranks once again. He earned the belt in about half the time second time around. A clear respect is shown throughout the gym for the veteran, and when you think about, his story says a lot about persistence and learning how to start over. In fact, “sticking through it” is probably the key to any fight game.

Rolker has been witness to such occurrences in real life. The first as corner man to Antônio Rodrigo Nogueira’s persistent performance over the hulking Bob Sapp in Japan and later seeing his brother Royce subbing famed US wrestler Dan Severn with a triangle choke in UFC 4. In both instances adaptation seemed to be the other secret to success. 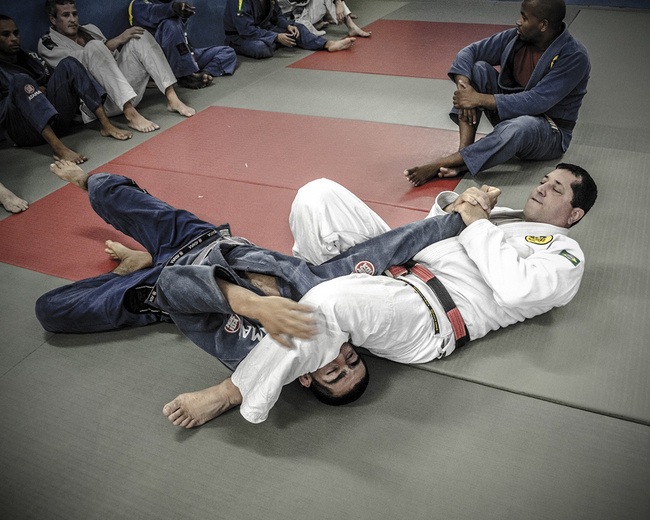 “Great jiu jitsu fighters have a good chance in the UFC because I think to become a great MMA fighter, you have to be an excellent finisher. You have to know how to finish in every position,” says Rolker when I ask about the influence of BJJ in mixed-martial-arts. “The truth is those who are fighting jiu jitsu in UFC are athletes that have only competed for maybe eight years. This isn’t good. A person needs to be a champion first. You become a champion here first, and once you arrive to MMA, it’s just an adaptation of that game. You can adapt a game of Muay Thai, of wrestling, and when the time comes, you adapt for your survival.”

In hearing this, it makes complete sense that Brazilian jiu jitsu was created in Rio de Janeiro. It is a city where literally anything can happen at any moment, and learning how to roll with the circumstances becomes key to one’s survival. Political unrest, public riots, bus breakdowns and bank strikes, the city teaches you to be prepared for anything, all the time. I guess what I would say training has done for me is to take things as they come, roll with the hard times, and be in the right position to capitalize when the momentum shifts.

“When you get to the championship, it’s easy to win, because you train harder at the academy here than you will at the championship,” muses Rolker when discussing the ideal training regime. “The message I always pass is to train in jiu jitsu, do sports, whatever sport. Sports are the healthiest thing in the world. Sports leave your mind tranquil and gives you self-esteem. Jiu jitsu gives you an even better self-esteem because it’s the only sport where you’ll know how to turn anything, in whatever situation.”

Teamwork, adaptation and showing up. At least for me living in Rio de Janeiro these past two years, those tools have indeed proven to be pertinent in the survival kit.