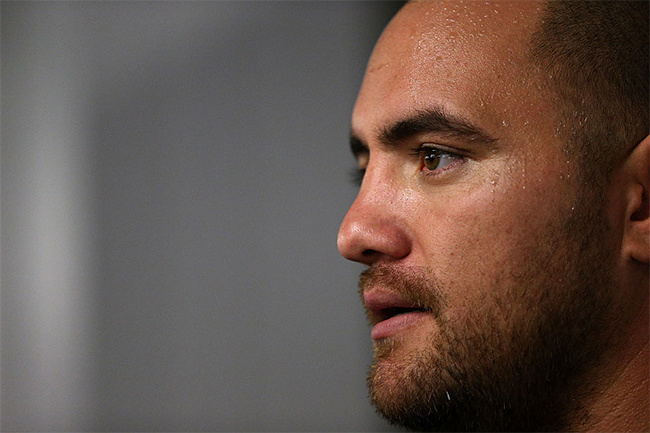 The October before last, I got to spend a week observing life inside Jackson’s MMA gym in Albuquerque. As a relatively new MMA fan, the first time I ever heard of or saw Travis “Hapa” Browne was in person, when he came in with some of his training partners from Hawaii and his tiny French bulldog named Nacho. I spent most of the hours that he was there pinned against the farthest wall I could find, wide-eyed and shocked that a man so large could move so fast. He and his friends wore wrestling singlets in bright, gaudy colors and would have looked goofy had they not been sending minor earthquakes through the floor during cage drills. I recently got a chance to catch up with Travis to talk about life, dogs, his beliefs, and his family.

Fightland: At the end of your last fight, you had a few minutes to say absolutely whatever was on your mind. What prompted your dedication of that fight “not for these rich dudes sitting up close to the cage, [but] for the blue-collar workers sitting way up there in the nose bleeds”?
Travis Browne: The one thing I’ve been known for is that whatever I’m feeling, whatever is right in front of me, however things are going in my world and what I’ve noticed, it could be in society in general or whatever, I’ll say it. I’m not a guy who spends a lot of time watching the news and I’m not really politically involved, but I am a guy that understands his surroundings. And I’ve started to feel like the backbone of this country, more lately than ever before, is getting forgotten about. The backbone isn’t the guy sitting up in the executive offices. They wouldn’t be able to do their jobs unless they had the people who work for them. It’s a give-and-take relationship. Blue-collar workers also need those white-collar workers, and there’s a balance there, a marriage. It needs to go back and forth. And when one starts to get stepped on or overlooked, things get out of whack.

A lot of people in the fight world are so quick to acknowledge the celebrities sitting up front, like, “Oh hey! Look at who’s here watching me fight!” And that’s great but at the end of the day there’s a dozen celebrities there but there’s tens of thousands of people there to watch you, and I don’t think they should be forgotten just because I don’t know all of their names.

I’ve read that before you took up fighting you used to professionally train dogs?
I trained all kinds of dogs. I did mostly regular house obedience for the normal person but what I really enjoyed doing was bite work and military work.

You’d think that a person with those skills would have a pack of big hunting dogs or show dogs, not a cute little French Bulldog named Nacho.
For a long time I was just alone. I was really focusing on myself and my training, and I’d go out to fight camp in Albuquerque and be completely alone. That’s why I go out there, to have that solitude and focus. But after a while I wanted to get a companion to go travel everywhere with me, and that little turd, he travels everywhere with me, he flies with me, and he’s spoiled as can be and that’s what I needed. 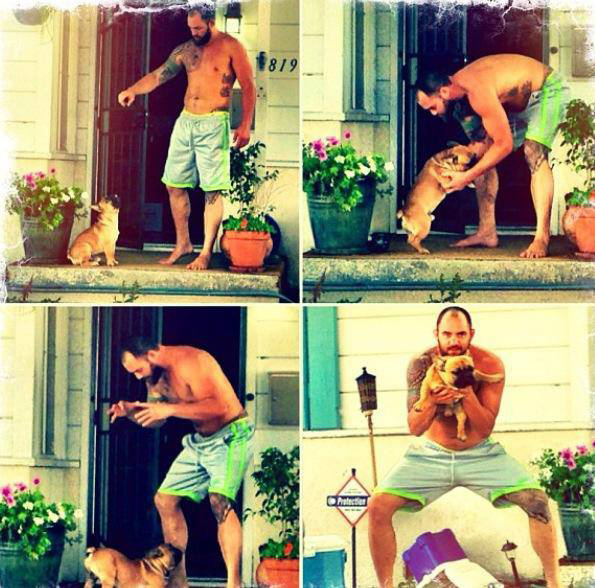 In my experience, Hawaiian fighters have this reputation as being incredibly intimidating. They don’t outwardly seem to feel any fear or pain; they don’t get nervous. That seems to be something that’s in your blood.
It’s part of our culture and always has been. The Polynesian culture has a very quiet confidence about it. And I think that intimidates people. And it doesn’t help that we’re just really built for it. I mean, we’re big people; we’re heavy-boned. One of the things I felt was constant in the male figures I had in my life growing up was that quiet, very soft confidence. It’s like, “Hey, we’re trying to get along but if you want to take it there then we can do that.” And I think that’s what intimidates people the most, is when they can’t read you. People are afraid of what they don’t know, and when they can’t see if you’re angry or scared, they wonder why that is. When you’re confident in the way you carry yourself, when you don’t show your emotions, I think that plays a big role in it.

Do you ever get scared? Has anyone you’ve ever been slated to fight made you nervous?
Yeah, there’s a general nervous feeling that you get, of course, before you go in there, but from a mental standpoint, if you really look at the person and fall into the hype surrounding that person, then you’ve already beaten yourself. I see my opponent as just another man and every man can be beaten. That’s what I believe in. Like when I fought Alistair [Overeem], I didn’t look at it like, “Oh man, I’m about to fight Alistair Overeem.” It was just, “I have a fight, these are the things he is good at, and this is how we counter that.” If you take the personality out of it then you take the emotions out of it. And part of that comes from that quiet confidence. Understanding what is going on, not letting your emotions get the best of you, it’s the same as how I am in my personal life. I joke around a lot with my friends, but when I’m having a serious conversation with somebody, I know what I believe, your opinion will not sway me, and this is how I feel. And when you approach fighting that same way, it makes it much easier.

Judging by your pictures, you and your girlfriend and your boys spend a lot of time outdoors, hunting and fishing, is that something you’ve done all your life or something you took up as an adult?
I picked it up later. I’ve been boar hunting in Hawaii a few times but not to the extent that I do now. I think it’s important because we forget, in this day and age, what a life really means. People go out and kill stuff but they aren’t really hunting; they don’t use all the parts of the animal. I want to teach my sons that that hamburger they’re eating is a life. It didn’t just come from the grocery store; it didn’t just appear in a round shape and then go into your belly. There’s work involved; there’s a life taken and life is something to be thankful for. It’s not just fun and games. Yeah, hunting is fun but we’re doing it for a reason.

Something that we do when we’re hunting is sit down next to the animal, put our hands on it, and say thank you. Do you guys do anything like that?
Yeah, definitely, even when it’s fish that we kill. We’re thankful for that food. And I think blessing the food that you take is important. You can’t really understand it until you’ve taken a life like that and you see the work that it took to put that meat on your plate. My kids haven’t hunted themselves yet, but they will understand that when the time comes. Soon, though.

I took an impromptu poll recently and it was decided that you have some of the best tattoos in the UFC. Are there any stories there? I’m guessing they’re traditional Hawaiian tattoos but that’s all I can tell.
The one on my leg is for protection of my family and a story of new beginnings, which is for me and my boys. And also in fighting: That’s my lead leg forward so that’s protection in my battles as well. I have my father’s name on my arm. He passed away when I was 10. I have the islands on my chest and the original Hawaiian flag on my shoulder, which is to give thanks to my ancestors and acknowledgement to my heritage. 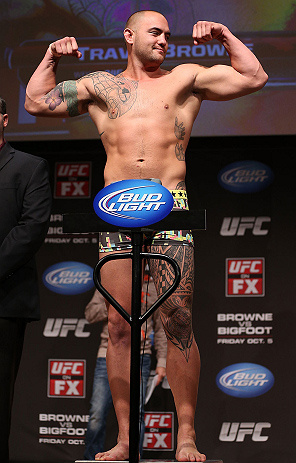 Are Hawaiian women just as intimidating as the guys?
Oh yeah, Polynesian women are intense. They’re a lot of the reason that the men are so humble but so confident as well. It’s a very strong culture in that way. The way I look at it is that in a relationship, maybe the man is the head of the family, but if you look on a body and the man is the head, the woman is the neck. She’ll turn the head in any direction that she wants. So for men to pick the right woman is very important because that will reflect in the man as well. If you have the wrong woman behind the right man, he’s going to end up being the wrong man. It’s an equal relationship and it’s important for guys coming up to know that.

Before and After: Travis Browne