Tryouts and Tribulations in Phuket 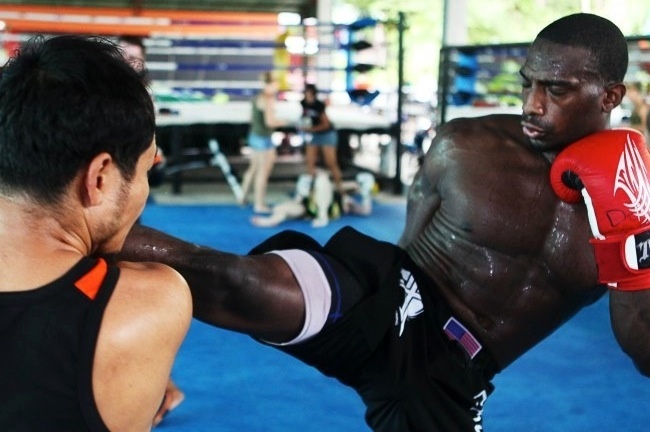 Didn't realize how much downtime I'd have in Thailand. Bored as fuck right now. Got to avoid all the fun shit ‘till after the try outs. I better win this shit. I'll be damned if I spent literally every penny in my account to fly my black ass over here and go home a loser. I truly feel bad for alcoholics. Cause I barely drink and I'm dying to get out to Patong [Beach], to drink and party. I can imagine how they feel daily. Fuck it, staying focused. Can't wait to get back to training tomorrow and show these Aussies and Brits how we do it uptown.

The Facebook updates come regularly, like dispatches from a Vietnam War correspondent languishing in Saigon. But the only war taking place is a personal one, the stakes encompassing not so much life and death as a future, and the correspondent is the furthest thing from an addled journalist working for The New York Times. The man on the ground is Bradley Desir, a 25-year-old New York native, ex-Marine, and experienced pro fighter. It’s the last week in November.

He has come to Thailand because the Tiger Muay Thai camp in Phuket had put out word that they are holding tryouts for their MMA fight team. Candidates chosen will get a scholarship to live and train there all expenses paid. Desir wants to be one of the lucky five chosen, wants it so much that he’s spent what would be his rent money stateside just to get here. Wants it because when he stepped into the cage in Atlantic City and tapped out an opponent in 36 seconds and pounded out another, the cheers were meant for him and they were loud and he’d earned them.

First session was probably the most intense training session of my life. You could feel the tension and [it] had almost a fight-night aura to it. The competition is stiffer than I expected but that’s okay, I love competition and I don't mind the struggle of wills. I hope I looked good this morning and even better tonight. I just ate and showered and now going to rest. I'll post another blog after the evening session.

Over a dozen hopefuls have come from all over the world for a shot at the Tiger Muay Thai scholarship. Like Desir, they know what it’s like to hit and get hit, and like Desir, they all believe their it’s their destiny to live the life of a fighter. But none of them is quite like the New Yorker when it comes to accomplishments. Before turning pro in 2011, Desir would trek down to Virginia for amateur fights, snagging armbars like a male version of Ronda Rousey. He continued the trend when he debuted in the Cage Fury Fighting Championship in New Jersey, but when faced with a Brazilian Jiu-Jitsu black belt in his second pro bout, Desir flipped the script and TKO’d him on the feet. Despite having no martial arts or combat sport experience when he took up MMA, he was beating fighters who’d been training most of their lives.

Okay, second session just finished – just as intense as this morning, except I thrived in the moment a little more. I was shooting blast-doubles, power-doubles, high c's, and hip throws like I grew up wrestling in Iowa. Man, I'm pumped right now. Didn't get taken down once, pushed the pace, worked hard, and I think it's gonna pay off.

Ever since 1999, when future UFC champion Jens Pulver showed up at Pat Miletich’s camp in Iowa with his life in suitcases, it’s become common for aspiring fighters to gamble everything on a fight team taking them under their wing. What Desir and his cohorts in Phuket are hoping for with Tiger Muay Thai, others at the same time are hoping for with Team Quest in Murrieta, Tristar in Montreal, or Greg Jackson’s school in Albuquerque.

Third session was the most technical. After yesterday's two grueling sessions it was hard for me to get out of the bed this morning. The practice was designed to be early in my opinion to see how we perform on lack of sleep and food. ... I still did well. Took people down at will. Controlled the ground fight the majority of the time and worked hard. Interview at 11:00 and then last training session at 2:00.

It's a shame only five fighters are going to get the scholarship. There is gonna be more unhappy people today than happy people. I wish we could all win and just be one big happy team.

Last session was all cardio and very intense. First we did water games and drills and beach-to-ocean sprints that looked fun but were very hard. Then we ran three miles up a mountain to Big Buddah. Hardest thing I’ve done since the half marathon in the [Marine] Corps. They're going to announce the 2013 pro MMA team in a few minutes. I will keep you posted!

Tiger Muay Thai‘s MMA team is led by American UFC veteran Brian Ebersole. He, along with fellow former UFC lightweight Roger Huerta, makes it clear from the outset that they’re watching for work ethic and attitude as well as the ability to fight without hurting training partners. It’s not enough to be talented to make the team; you have to fit. Desir doesn't make it.

I feel like dying. I feel like I lost another fight. I like the guys that made the team, but I’m better than four of them… The coaches said I was top two in talent… But they didn’t know if I was coachable. They said because I’m talented, I felt as if I was entitled to shit. I dunno where I’m gonna go now.

I need a win so bad. I’ve been winning my whole life. I don’t know how to deal with this losing business. I’d rather kill myself than lose. They invited me back for free training and shit, but I’m nobody’s second choice. I’ll be arrogant and spiteful and take my talents elsewhere. I know God has a plan and I shouldn’t question it, but I can’t lose anymore. For a winner, there’s nothing more mentally debilitating than losing. I’m more sensitive than people think. I can’t keep putting my heart on my sleeve only to have it crushed. I’m not that tough.

May God be so kind as to put me on the other side of the cage of everyone else in my weight class on the team, so they can feel my pain and know they fucked up. Harlem, I’m on my way home.

I promised to share my journey in its entirety, so I will continue to be honest and share the pain and struggle as much as the joy and success.

There's nothing in my life I love more than winning. I don’t remember when I got so competitive. My mom said the way I cry and throw a fit when I lose now is the same way I did as a kid. Funny I don’t remember that. My fear of losing sometimes overpowers the joy I used to find in fighting. Times like this remind me of the feelings I had sitting in a war zone and the hurt, pain, and fear and led me to throw my first punch. Maybe I should let the pain be the main motivator, not dreams of living the high life, but the fear of being average.

When I got this opportunity I was so excited to be a founding member of something so special, invested literally everything financially and emotionally that I had. So when I was told I didn't fit the bill I was crushed. I never minded my body being broken, just my spirit, and it did just that. Just because I was more upset than anyone else on the team doesn't mean they wanted it any less than I did. It's just hard to express and acknowledge all the different feelings and thoughts running through my mind and body.

I still want to be a part of this team, but need time to go home and regain control of my feelings, finish eating this humble pie, and reevaluate if not coming back is the right choice, or the egotistical choice. I think I came over here with too much of the American mindset were everything is result-orientated. I want to win so bad that I forget about the journey and just focus on the destination- winning. … When I look hard, this trip was a success. I posted that I was coming to grow as athlete and a person, while I didn't grow the way I would have liked. I still grew. Sometimes the most important lessons are the hardest. What hurt the most is when I asked the coaches what I did wrong and after my evaluation they said, “Truth is, you don't need us, you're going to go far with or without us.” At that moment I realized this whole thing wasn't a matter of need, but a matter of want. I don't/ didn’t need Tiger Muay Thai and MMA. I wanted/ want Tiger Muay Thai and MMA.

Bradley Desir heads home to Harlem from Phuket the day after getting cut. All told, he spent 13 days, and all his money, in Thailand.

“It was literally everything I had,” he tells me. “I took my rent money and bought a plane ticket. I had to get money from my mom and my sisters while I was over there so I could eat.”

How did it feel when they announced he hadn't been chosen?

“It’s not hard to teach me because there’s so much I have to learn – I don’t know everything, I know very little. It’s just that I can apply what I know very well. But they were saying … when I compete, I like to talk a little smack, play around, you know? You know, I just love to compete, and it’s so important for me to win. I want to win every drill, win every fight. And they were worried about that. They were worried about my ego. They said they didn’t know enough about how coachable I am. They did not say I was un-coachable. They said they didn’t know, that those two days wasn’t enough, and based on the information they had they couldn’t come to a conclusive decision, so they had to go in another direction.”

“I have nothing bad to say about [Tiger Muay Thai],” he continues. “I had a few messages back and forth with Roger Huerta, and he really convinced me to come back. So I’m going to go. I’m going to humble myself, show them that I work hard, that I’m coachable, and I’m going to show them that they made the wrong choice.”

I ask Desir if he would do it all over again.