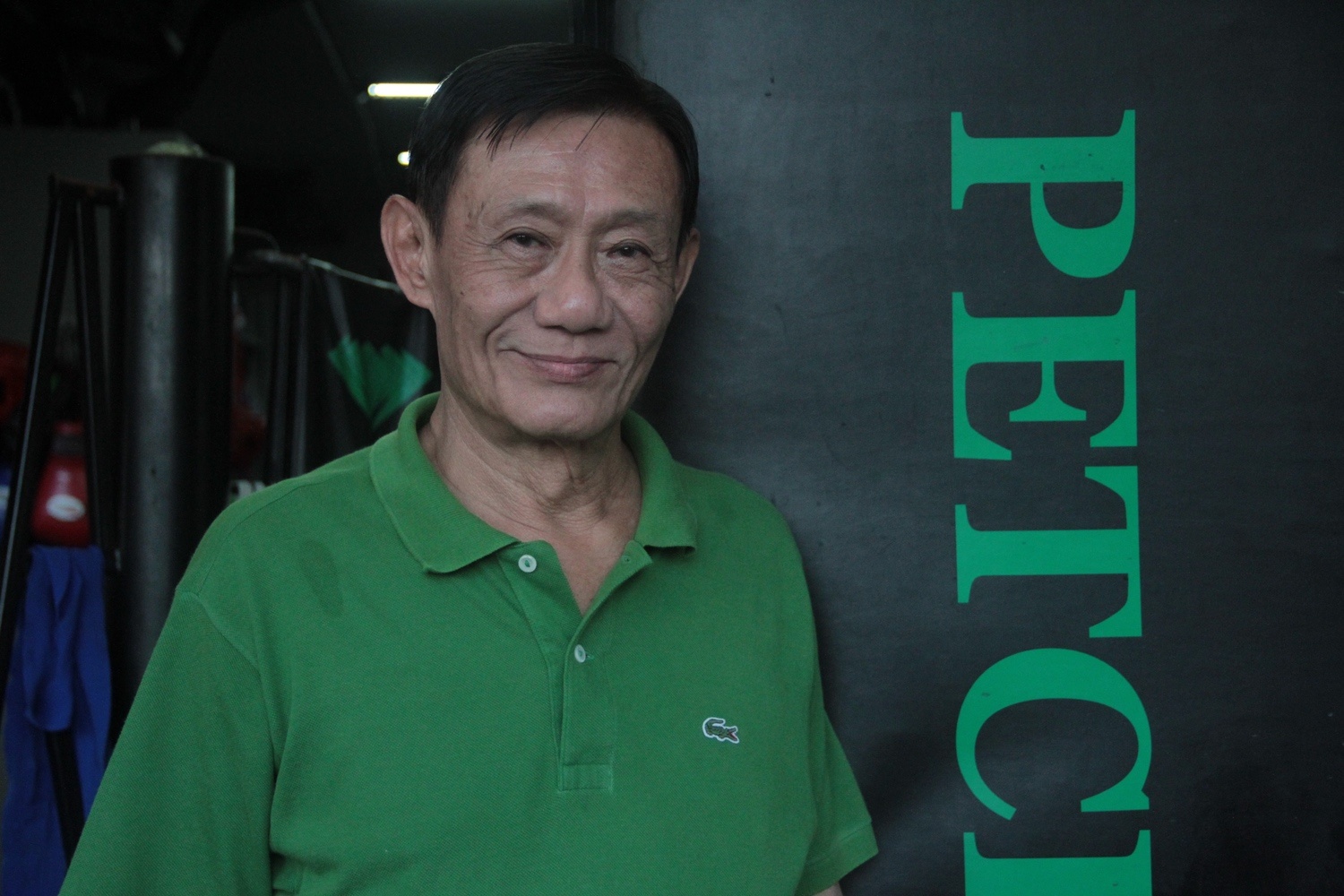 Virat Vachirarattanawong, better known as Tycoon Nao, founded internationally famous Petchyindee Gym 40 years ago. Seven years after opening his gym, he became a promoter, best known for his Petchyindee promotion at Lumpinee Stadium in Bangkok. Now pushing 70, he has decided to call it quits at Lumpinee for good. His last show is scheduled for December 8, 2015. We caught up with him at Petchyindee Gym in Bangkok Noi just a few days before this historic fight. His daughter Bet, 25, was our interpreter.

Fightland: How did you first become a promoter?
Tycoon Nao: Lumpinee Stadium asked me twice to be a promoter but I said no each time. But the third time, Lumpinee basically forced me to promote.

They forced you? How?
Well, they forced me by asking for help. Back then, 30-something years ago, Lumpinee wasn't doing well. Rajadamnern was doing better and Lumpinee wanted to be able to compete. I had many great fighters and that's why Lumpinee wanted me, because I could put my fighters in their shows. So I said, "Okay, I'll promote a show," and slowly I became a regular promoter.

What did you like being a promoter?
I felt I was helping the sport to grow.

How do you do that?
You need to make sure the gyms the fighters are from are owned and managed by good people, not focused on gambling. Trust plays a role.

Why did you decide to retire?
Well, I'm not completely retiring from Muay Thai. I'm retiring from being a promoter at Lumpinee, but I will still promote for Toyota Marathon [Muay Thai] and World Champion [international boxing].

Why retire just from being a promoter at Lumpinee?
Thirty-three years and eight months is a long time to be a promoter there. I want to retire while I'm still strong and still famous. Better than waiting until I can no longer move.

How old are you now?
Sixty-nine.

What will you do now afterwards with all that extra time?
Travel, hopefully abroad. And exercise. I like running on the treadmill. And the sauna.

Bet: He opened this new Petchyindee [facility] for himself!

You've been alive almost 70 years. How have you seen Muay Thai change in your lifetime?
In the past, when people watched Muay Thai, they watched it because they truly loved it. Nowadays, it's almost 100% gambling. That's the only reason people watch anymore. The gamblers take their profits off the boxers. Sometimes they tip them out if they win, or pay someone to lose. Of course, paying someone to lose is illegal.

Have you ever discovered that a fighter from your gym or in your promotion threw a fight?
It's hard to say. It could have happened, but I don't know for sure. However, as for the fights I've promoted, a fight has never been stopped or waived by the refs or judges because it looked like it was being thrown.

What will happen to Petchyindee promotion at Lumpinee now?
It's ending completely. I'm not giving it to anyone, but if [my son] Boat wanted to take it over, I would let him. But he's busy with the Petchviset promotion over at Rajadamnern. He doesn't want to do two because if he's running two big promotions at both Lumpinee and Rajadamnern, it might jeopardize both. He'd be spreading himself too thin. But it's an option; it's legal to do.

If it were up to you, would you prefer he takes it over and keeps that side of the family business going?
I can see two sides to that. If Boat takes over Petchyindee, it's going to last another generation. But if Boat doesn't, that's okay because Petchyindee will end strong on December 8.

What have you learned over the years about being a good promoter?
Oh goodness, I've learned so much. I learned how to make a regular kid into a good fighter, a known fighter. Three main things go into this -- the boxer has to be ready, the trainer has to be great, and the promoter has to find a way to make the boxer popular and get him good matches. I also learned ways to promote Muay Thai to other cultures, to make the world accept it as a martial art that should be known.

What advice do you have for aspiring promoters?
How to be a great promoter? First you have to love Muay Thai. Really love it. Don't just do it for the business. And you have to be honest; you have to keep it clean. When you have two boxers you want to match, you have to be fair, make sure you're matching them evenly.

Did you ever promote female fights?
No. They weren't allowed to fight in any of the stadia or promotions I've been involved in. And I don't want to profit from women fighting. I think Muay Thai is a sport for men. Women can learn and practice it but I don't want to make female fighting part of my business.

Why not?
I just don't like it. Every time I watch women fight, I see them get hurt and feel pain. I don't like to see that.

Tell me, what was the scariest experience you've ever had as a promoter or gym owner?
I witnessed a shooting at Lumpinee Stadium 20 years ago. Someone was shot and killed right in front of me. He was a Chinese mafia guy, just there watching his fighters fight and putting some money down.

Did you know him personally?
Yes, but I can't say whether he was a good or bad guy; he was mafia and was there at the stadium gambling, so… Someone hired an assassin to kill him. I was literally two meters away when he got shot.

Whoa, did you get blood on yourself?
No. But I did see the guy's eye fall out of its socket in front of me. That's where the bullet passed through.

Was anyone else killed?
Yes, two other people died that day. They were just bystanders. I remember the Chinese mafia guy's bodyguard got shot too, but he lived. The assassin was shot in the leg and the police caught him in the toilet. I don't know why he ran there to escape.

Did you ever worry about being killed too?
No, I didn't make any enemies and I wasn't mafia.

(At this point, Tycoon Nao receives a call, gets very animated and speaks loudly in rapid Thai on the phone. I ask Bet what's going on in the conversation.)

Bet: (Laughing) Lumpinee says they don't believe he will retire. They want him to keep promoting.

While he's on the phone, let me ask you, how did your father get the name "Tycoon Nao"?
It comes from Sia Nao, which means Tycoon Nao. Sia is Chinese, maybe Cantonese?, and it means a person who is Chinese and rich. Nao means rat or mouse. Actually rat sounds disgusting. Maybe mouse is better.

So his nickname means Tycoon Mouse? Who gave him that name?
I'm not sure. His father maybe? Everyone calls him that.

Everyone?
Yes, I've been hearing people call him that since I was a little kid.

What does your mother, his wife, call him?
She calls him E-rang, which means eagle, because he was very thin when she first met him.

She calls him eagle because he was thin?
Yes. Eagles are thin in Thai culture.

(Tycoon Nao ends the phone conversation and appears to be in good spirits. Our interview is interrupted twice more by others vying for his attention.)

So, let's go back to the story you were just telling. In light of the stadium shootings and bombings that many people in your era talk about having lived through, do you think it's safer now go to watch Muay Thai than it was 20 or 30 years ago?
Tycoon Nao: Yes, much. Right now mafia doesn't have much of a presence anymore in Thailand so it's much safer. Don't be afraid!

What can we look forward to for this December 8 fight, your last Petchyindee promotion?
On that day, things will change. People in my age group who haven't watched Muay Thai in years will watch again. It'll have an old "Golden Era" feel to it. They'll be watching because they're fans of my shows from years ago. They're so old now. Maybe some of them will come to the stadium with canes, or wheel themselves in!

What do you want your legacy to be?
I would like to be remembered as a person who helped make Muay Thai more famous in the world. And also, I would like to be remembered as someone who helped people in need. When there was a flood in Bangkok a few years ago, and back in 2004 when the tsunami struck Phuket, I tried to help by promoting shows and then donating the profits to the disaster victims. I also donate to hospitals and temples. Making merit, we call it.

Is there anything else you'd like to add?
I've been involved in Muay Thai for 50 years, and I believe the duty of the next generation is to help the world accept Muay Thai as a Thai art. Not just a sport, but an art.

Special thanks to Bet Vachirarattanawong for help with Thai-English interpretation.

The Son of Petchyindee: An Interview with the Youngest Major Promoter in Thailand