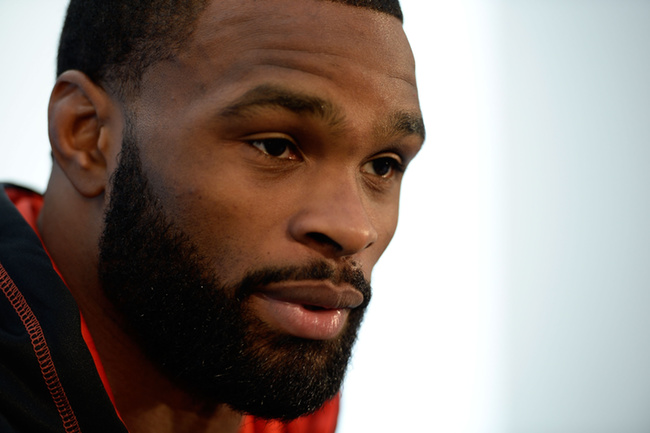 Ice Cube, MC Ren, and DJ Yella, three-fifths of seminal gangsta rap group N.W.A., are reuniting this weekend. There’s no word yet if Dr. Dre will be performing alongside his former collaborators, but if you ask UFC welterweight Tyron Woodley, there were certainly murmurs on the set of the upcoming Straight Outta Compton biopic.

“I could just tell on set that they were gonna make some moves with each other everyday,” offers Woodley, who costars in the film, set for release on August 14. “It was cool to see them … it was just a great sense of history that was there … they were in an impoverished, violent, infested community and they all found a way to be successful in life.”

N.W.A.’s story, like their lyrical content, chronicles the group’s rise out of the South Central ghettos of Los Angeles and adjacent neighborhoods like Compton, Inglewood, and Watts. The quintet gained notoriety, and drew criticism, for their vivid depictions of inner city life during Reagan and Bush I-era America, holding a mirror, and a Glock, up to a society in denial of racial injustice and bigotry, with songs like “Straight Outta Compton” and “Fuck tha Police” later becoming anthems of the 1992 L.A. riots.

Woodley, who grew up more than 1,800 miles from Florence and Normandie, the epicenter of the unrest in L.A., was only 10 years old when the officers accused of beating Rodney King were acquitted, transforming the streets of Southern California into a powder keg. But the reality of life in the hood, where white authorities are often pardoned for massive abuses of power, is one that Woodley knows all too well.

He is from Ferguson, Missouri after all.

“There were things going wrong with law enforcement for many years,” explains Woodley. “I’ve been in this part myself. Pulled over, harassed, my friends beat up by police officers … Ferguson is a city limit that has not completely gotten rid of racism.”

In Singapore prior to UFC Fight Night 48 in August 2014, Woodley and his wife watched in horror as his hometown erupted in civil unrest and disorder following the killing of Michael Brown by a local police officer.

Ferguson became the new center of a decades-long, national discussion on civil and human rights; the world looked on, as local officials silenced frustrated protestors with force and scare tactics. And soon, Ferguson picked up the torch from former racial hotbeds like Birmingham, Selma, Detroit, Chicago, Crown Heights, and Los Angeles, where Woodley flew following his TKO win over Dong Hyun Kim, to shoot scenes for his role as T-Bone, an Ice Cube protégé and member of Da Lench Mob.

“The moment I got on this movie, it’s basically time repeating itself,” comments Woodley. “Talking about the riots and the police brutality and the violence … it’s crazy that I’m a part of this film that’s covering the stuff that we’re going through now, maybe on a larger scale.”

While on set, Woodley gravitated toward Cle “Bone” Sloan, a producer and occasional actor who is affiliated with the Bloods, one of South Central’s two main, rival gangs. Sloan became an advisor of sorts to Woodley, not only because of his Hollywood resume that includes credits in Training Day, End of Watch, and Bastards of the Party, which he directed, but also because of their mutual experiences of growing up amid racial turmoil.

Working together cemented a fast friendship between the two, so when Woodley began his own community outreach efforts in the Ferguson-Florrisant school district following the November 2014 unrest, he called on Sloan to join him as a guest speaker to educate a younger generation about civic responsibility amid gang violence. However, Sloan never made it to Ferguson. 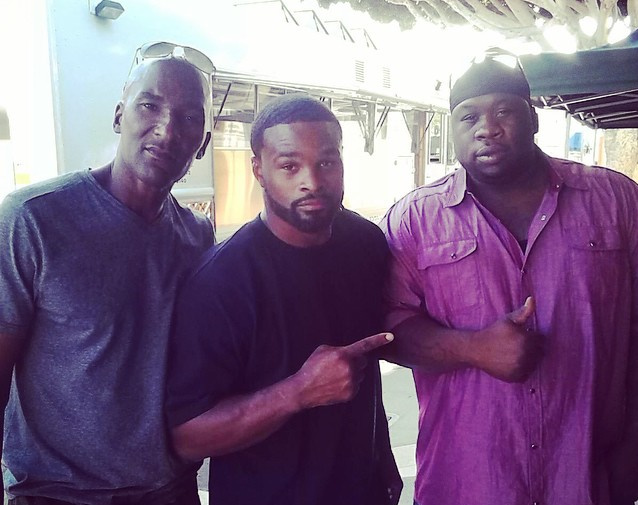 (From left to right) Cle "Bone" Sloan, Tyron Woodley, and an unidentified Blood gang member on the set of Straight Outta Compton.​

On January 29, 2015, while still in production, Sloan was allegedly run down by former Death Row Records CEO Suge Knight outside a South Central hamburger stand. Sloan suffered severe injuries, while another man, Terry Carter, died in the melee. The incident hit home with Woodley.

“Thank god he’s alive. [He suffered] very, very serious injuries, but he’s alive,” recalls Woodley. “He’s the one … he’s the guy that goes and gets it done when you can actually have the blessing of the hood to do it … he’s the guy … I was more intrigued by him and his respect that he got in the neighborhood from Bloods, Crips, or whoever.”

Two days later, on January 31, 2015, Woodley returned to the cage for the first time since the Ferguson riots and his experience shooting Straight Outta Compton. By then, the national rhetoric on racial intolerance had shifted to New York following the death of Eric Garner as a result of unnecessary force by police. Woodley scored a split decision victory over then number-seven ranked Kelvin Gastelum in the co-main event at UFC 183, despite breaking his foot early in the contest.

And whether it was a build up of frustration regarding the last few months in his hometown or the near-fatal incident involving Sloan, Woodley seized his opportunity to let his voice and disdain resonate among the MMA elite.

First came the candid remarks regarding the promotion of his bout with Gastelum. Next up was the shocking in-cage announcement that he was refusing any of Gastelum’s penalty pay, contractually given to Woodley after the Yuma, Arizona product failed to make weight by 10 pounds.

“The [UFC] was overly promoting him … we [were] the only poster in the last 12 months where you don’t see the co-main event … and I think that part of that was from the frustration that they couldn’t bait me into doing a fight against Hector [Lombard] … I think it was kind of a small punishment for not doing the fight. But I didn’t like the fact that they was promoting the number seven … who had just beat his first top 10 … saying that if he beat me he was gonna fight for a world title … I just thought it was kind of disrespectful,” explains Woodley. “I knew what percentage I was getting ... and could I really deal with myself taking that money from him and knowing that it wasn’t gonna completely put me into the green and change my life, but it might hurt him more, especially his first loss, moving up a weight class, basically going from thinking he was gonna win … he might lose a couple sponsorships, who knows. I just thought it was a good gesture. I believe in karma and maybe it will come back around to me at some point.”

Never the shy type, Woodley continued his vocal assertions, despite a broken foot that would keep him out of the Octagon and off the training mats.

Facing criticism for his performance against Gastelum, Woodley quickly made note of his finishing rate in the UFC. With knockouts of Kim, Carlos Condit, Josh Koscheck, and Jay Hieron, Woodley didn’t quite understand the wave of negativity surrounding his win over Gastelum, the only decision victory of his seven-fight UFC career.

But this wasn’t the first time Woodley heard the fickle cries of MMA detractors, looking for any reason to offer disparaging remarks about a fighter’s style. Less than a year earlier, in March 2014, Woodley felt he was shortchanged following his injury TKO win over Condit, who tore his ACL midway through the second round.

“Joe Rogan made a bold statement. He said no welterweight wants to strike with Carlos Condit … and if you remember the fight, I showed that I  … out struck Carlos. He had no glimmer of hope in that fight in the striking department. I was knocking him across the cage, landing hard leg kicks, landing hard straight punches. The second he tried to go for a punch he was getting taken down,” adds Woodley. “So I just think that our sport is too opinionated. I think we’re so transparent to our fans they feel that if I buy a 50-60 dollar Pay Per View, now I bought shares into your company, now I have an opinion on how you should fight and who you should train with, and who you should fight next. It’s kind of a mockery. You don’t go to Turner communications and say ‘hey, I bought a Pay Per View, so now I want you to fire this person. I want you to promote this person.’”

These days, Woodley is back in St. Louis with his wife and four children. He’s finally been cleared to begin training after breaking his foot in at least four different places, and has seen America’s racial divide migrate to Baltimore, following the death of Freddie Gray, yet another tragedy in a series of high-profile police brutality.

And while the injury prevented Woodley from accepting any film roles and traveling to south Florida to tape The Ultimate Fighter season 21 alongside his American Top Team mates, doctors fearing a blood clot, the time off allowed Woodley the opportunity to re-assess his MMA goals. He remains persistent in his repeated calls for a bout with Johny Hendricks, an old foe from Woodley’s collegiate wrestling days at the University of Missouri, where he was a two-time All-American.

“Johny Hendricks might be my toughest matchup, he might be my toughest challenge … [but] it would be very risky to take a fight against me, lose his number-one contendership, and his opportunity to fight for a world title,” states Woodley. “Maybe I do pick fights, but the fights I pick are against the best. I want to fight … people that I think will challenge me … the [UFC] made me believe that it was a very good chance that I could actually fight him.”

But before Woodley can even begin to prepare for Hendricks, or whoever his next test may be, he’ll need a bout agreement and a willing suitor. He’ll also need a date, which has proved to be surprisingly difficult, especially considering the number of events the UFC is running these days.

“Hopefully, I’m looking at the card in Nashville on the 9th … my hope is to get in at the end of August, September at latest,” adds Woodley. “I think they’re going back to Vegas in September for UFC 191, so maybe I’ll try to get on that card at the MGM Grand.”

And no matter where and when Woodley fights next, his battle remains ongoing. He is a product of greater St. Louis, straight outta Ferguson, but his experience rings universal, from Baltimore, to New York, to Compton.