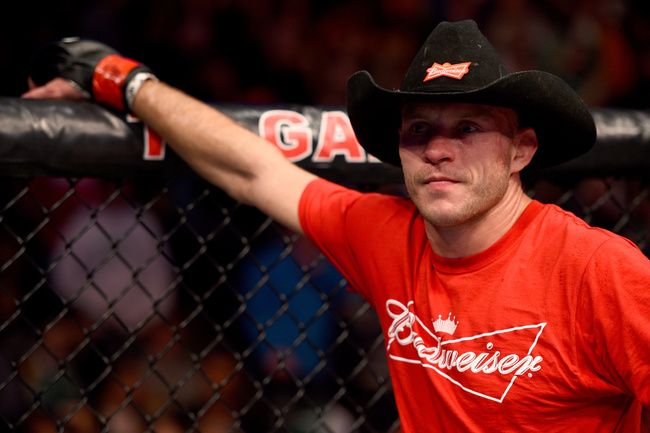 Great news for people who believe that good things come to those who wait. Patience be a virtue—the middleweight division isn’t going to have any sort of goofy interim title fight between Vitor Belfort and someone else while Chris Weidman recovers from his latest injury.

Fortunately, the title fight between Vitor Belfort, one of mixed martial arts’ history most decorated and fire fighters—truly one of the few mixed martial arts OGs—and Chris Weidman, the dude who beat Anderson Silva in back-to-back battles that culminated in the unforgettable and tectonic break of the Brazilian legend’s leg is back on track and it will now go down over the summer in a crazy card.

Once upon a time, UFC 184 was the most stacked up card to look forward to in 2015. Fighters making appearances included Jacaré Souza, Ronda Rousey, Vitor, Weidman, Cat Zingano, Frank Mir, Big Foot Silva, Yoel Romero, Holly Holm, etc. It was a true gathering of MMA gods. Alas, shit happens and now it’s a much less stacked, but don’t lose hope. The main event is still going to pop off—if you think a Ronda Rousey versus Cat Zingano ain’t much to look at, you’re a goon. And Holly Holm is making her debut in the co-main event. Yeah, she’s UFC green, but this lady’s been smashing her opponents for a hot minute now—she’s no rookie.

But if a stacked card is what you wanted out of UFC 184, the Ultimate Fighting Championship will make it up to you with this fire Vitor vs. Belfort rescheduling. UFC 187, which is going to certainly split the roof open with its spectacular main event, happens over Memorial Day Weekend. A really chill way to spend it would be to catch the card that the UFC announced last night. Let’s just hope that no one gets hurt or popped.

Since Weidman’s been forcing the fight to be pushed forward—not his fault, of course—Vitor’s just training and building the hunger inside, brick by brick. Expect him to come through with rocket power. In any case, this isn’t even the only title fight on the card. It was a hard-body rumor before, but now it’s official, because if not Rumble Johnson, then who else? Jonny Bones Jones is going to put to the test the longevity and durability of his undefeated record when he faces a steamrolling Anthony Johnson, who last conjured up a fire performance in the Octagon when he romped Alexander Gustafsson in his home turf of Stockholm a few weeks ago.

For a heavyweight contest, the UFC has tapped Travis “Hapa” Browne, coming off that rather dominant triumph over Brendan Schaub, to face the Pit Bull, Andrei Arlovski. Arlovski's return to the UFC after some stints in other promotions counts on two back-to-back wins, one of those being over Brendan Schaub and the other, Big Foot Silva. He beat Brendan by split decision, and he knocked Big Foot out with his fists.

For a flyweight contest, Team Alpha Male's Joe Benavidez takes on John Moraga. Benavidez is coming off back-to-back wins over Dustin Ortiz and Tim Elliott, as is John Moraga, over Justin Scoggins and Willie Gates.

And for the icing on the cake, Cowboy Cerrone is going to return to the Octagon after his spectacular run between April of 2014 and January of 2015—which counts spectacular wins over Edson Barboza, Jim Miller, Eddie Alvarez, Myles Jury and Benson Henderson—versus none other than the fearsome Khabib Nurmagomedov. Nurmagomedov has been sitting out for a while due to injury, so best believe that this cat’s going to be eager to do damage. Cerrone expects a boring fight from a hard wrestler, so let’s see what kind of game the Cowboy’s got ready to set free to offset Khabib’s grinding nature. Winner gets a shot at whoever the winner is between Anthony Pettis and Rafael dos Anjos. God damn is that lightweight top stack heated.

Here’s to Memorial Day Weekend and a raw card.