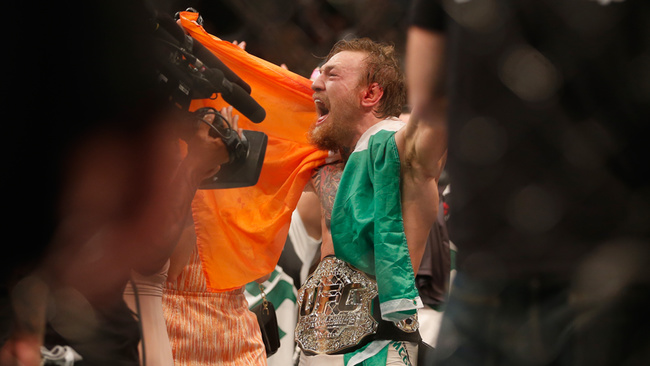 Conor McGregor rallied to stop Chad Mendes at UFC 189 on Saturday night, and for a few glorious moments nobody knew what to make of it.

Then it all started again.

Conor McGregor couldn't stop a takedown, he got lucky. Chad Mendes came in with just a few weeks of training and gassed out, with a full camp he'd have McGregor's number for certain. McGregor was never in trouble and is, in fact, the greatest fighter to ever live. There are even some people calling the fight a fix, which is astounding.

To my eye, what the bout demonstrated amply was, partly how exhausting simply battling in the guard can be—particularly in the bottom man is actually throwing the elbows which are one of the few truly biting strikes from the bottom when upkicks aren't allowed. Moreover, this bout showed a completion of the shift in McGregor from counter puncher to a man who fights largely on the lead. And most importantly, Mendes versus McGregor demonstrated the age old truth in combat sports—you must push a kicker back or at least be a mobile target. Letting a strong kicker fight on the front foot is just asking to have your liver tenderized and your head turned into a hacky sack.

I will tell you now, in all seriousness, that Chad Mendes could have come in to the cage in peak condition, ready to compete in a triathlon, and he still would have wound up out of breath and lost out in the open were he taking those snap kicks to the body. I have been harping on about the front snap kick with the ball of the foot for years—it's no coincidence that in every fight they are used, the recipient ends up winded.  Most fans didn't even notice Jon Jones using them in tandem with his jamming kicks to the knee and round kicks to exhaust Daniel Cormier every time he trudged straight forwards towards the clinch.

Not only does the front snap kick often land far more easily than a power round kick—because of a smaller striking surface and just not a lot of guys training against it as often—it requires less commitment of the hips into a thrust than the front push kick and is easier to recover from. You won't see thrusting front kick used much in MMA because it seems to easy to catch, yet in the main and co-main event of UFC 189 alone you must have seen about twenty or thirty snap kicks with the ball of the foot land in the midsection of Chad Mendes and Robbie Lawler.

Forward and upwards, whipping or swinging out rather than chambering and driving through.

The recovery on these snapping kicks allowed McGregor to move forward, cut the cage, and kick a man who no-one would want to give a leg to, while recovering the leg cleanly much of the time. It was aided by McGregor throwing a couple of obvious superman punches to keep Mendes from simply diving after the leg when he felt the foot connect. If you're still pretending that McGregor isn't an excellent kicker because his kicks don't look like Muay Thai, you're deluding yourself.

A delectable shoulder feint into a straight left.

Now that is not to take away from Chad Mendes, he cracked McGregor clean on the jaw more times than the heap of brawlers McGregor has faced, and he didn't simply dive after the takedown constantly—which most of us would be a terrible mistake and asking for a knee up the bracket. And I'm sure everyone and their mother is ready to chastise Mendes for throwing away top position by diving on a guillotine so early in a round.

Just a few days ago I discussed Gunnar Nelson's genius in holding mount for a whole grinding, crushing round before allowing his opponent some space and attempting the guillotine in the last

thirty seconds. If your submission attempt results in you going to your back, don't do it when you could be milking top position for damage or simply not having to work to get top position again. Mendes' over-eagerness to use the guillotine was the perfect example of the old Jean-Paul Marat folly.

Returning to that idea of hanging out on the end of a kicker's range: Jake Ellenberger made the same key tactical misstep as Mendes, allowing Stephen Thompson far too much space to think, move, and kick. There are plenty of examples of crowding great kickers to eliminate their power kicking game, and also to keep their feet moving so that they can't stop and fire. Most recently, Rafael dos Anjos pressured Anthony Pettis into ineffectiveness. The classic is Fedor Emelianenko walking down Mirko Cro Cop—who was never half the man on the back foot that he was when he was walking forward, intimidating people. Hell, even the wild and ageing Wanderlei Silva was able to do the same against the brilliant kicker, Cung Le at points in their bout.

Because Ellenberger sat so far back, Thompson was free to open up his kicking game, and wobbled the wrestler with a hook kick in the early going, then with a wheel kick, and then knocked him out with a second wheel kick.

The obvious flaw in both of those techniques is that if the opponent steps in on you as you kick, you have nothing. Your leg is draped over their shoulder and you're asking to be slammed on your head, or they can just let the leg go and start teeing off with strikes from their incredibly dominant angle. A chap named Rafael Aghayev in the sport of point karate—where the hook kick is scored very highly—made a specialty of simply stepping in on gangly opponents as they kicked.

The same is true of the side kick—the leg has to be retracted a little to wind up for the kick. When Ellenberger, by chance, stepped in on Thompson at an importune time, he found himself behind the leg and on that dominant angle.

How powerful is this position? Well, Alexander Gustafsson took Jon Jones down from here, so badly was the light heavyweight champion's position compromised.

It seemed miscalculations in range were aplenty this weekend though, as Brandon Thatch clearly thought he was out of range of Gunnar Nelson, before Gunny bounced in with a slapping left hook into right straight. A shame for Thatch because I liked the work he had been doing with his feet against the karateka to that point—inside low kick to outside low kick is always a winner in my eyes. But Nelson looked sublime in timing his man and in taking the back and securing the rear naked choke.

Boxing to a Loss

There were a heap of incredible fights this weekend but one I really want to give the proper time to was Thomas Almeida's victory over Brad Pickett. I touted Almeida highly in my prospect watch before UFC 189, but I did remark that he's pretty hittable. The first round of the bout illustrated emphatically that if two men trade punches, and one has head movement, it's probably going to end badly for the upright one.

Pickett slipped and countered with the left hook beautifully throughout the first stanza, often doubling up from body to head. Dropping Almeida twice, he looked to be getting the better of the Brazilian youngster. Almeida unleashed his signature counter right elbow and dropped Pickett in return, the timing was so beautiful it could have made Nate Corbett weep.

The reason that Almeida's head movement isn't as pretty is that he has been taught as a kickboxer. Pickett focuses on his boxing, wherein head movement is more important. Why is there less head movement in kickboxing? Because there are knees and body kicks being thrown up and ducking onto one will end your night.  When a fighter is slipping and dipping, his opponent should be throwing some round kicks and knees to stand him up. Even Ross Pearson, who I consider to be one of the best head movement based counter punchers in MMA, is a lot easier to hit with punches when his opponents throw a couple of kicks to scare him away from bobbing his head.

In the second round, Almeida threw a jab at Pickett which snapped his head back, and immediately jumped in with a knee. After eating a jab to the face (and I expect he'd do the same even if it missed) Pickett immediately began dipping his head. That's when the bicycle knee came up and hit him.

It was a textbook exploitation of boxing head movement in MMA and, once again, Thomas Almeida's savvy and power brought him a crushing knockout win in a bout where he wasn't looking tremendously sharp.

Finally today, I want to touch on something that happened at The Ultimate Fighter finale and irked me. After the American middleweight and surprisingly good writer, Josh Samman caught Caio Magalhaes with a rear naked choke, Magalhaes refused to shake hands—fair enough—but spat blood on Samman. Even this wouldn't matter if Magalhaes didn't have such a history of being a scumbag in the UFC.

This is a man who actively aims for his opponent's brain stem and has ended two professional bouts with blatantly illegal, disproportionately dangerous blows.

These are the kind of blows that could result in ring deaths—it was only the surprising number of deaths and blindings from rabbit punches that caused the targeting of the back of the head and neck to be banned in boxing, long before gloves and other regulations were even introduced.

No-one has a right to make a living in mixed martial arts competition just because they are decent at hurting other people in a cage, and frankly I would be glad to see the UFC wash its hands of this talented but dangerous and emotionally unstable young fighter.

Come back to Fightland tomorrow and we'll talk about the real main event of most fight fans' weekend, the glorious spectacle which unfolded between Robbie Lawler and Rory MacDonald.

Judging the Celtic Tiger: An Honest Look at Conor McGregor vs. Chad Mendes