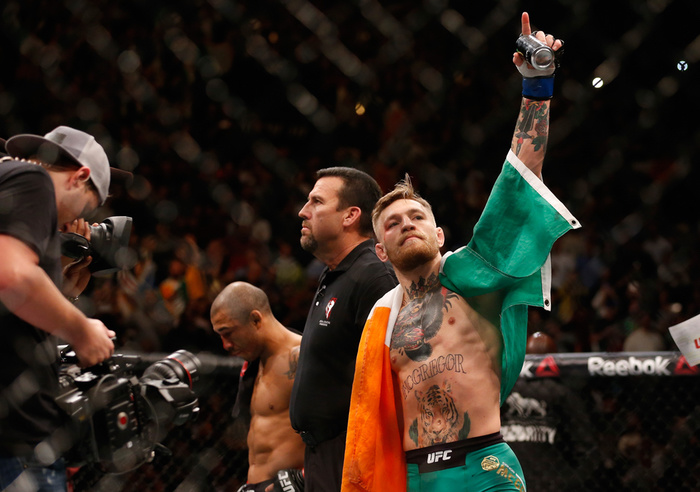 Arguably the most anticipated Pay-Per-View of the year, UFC 194 marked the third UFC card in Las Vegas in as many days. Headlined by a title unification bout between long-reigning champion Jose Aldo and outspoken interim champion Conor McGregor, the card also featured a middleweight title clash between apex predators Chris Weidman and Luke Rockhold.

Elsewhere on the lineup, we saw action in six of the UFC's most exciting divisions, with appearances by veterans, prospects, and top-ranked contenders alike, for a card that absolutely lived up to its own hype.

Here's a recap of the action for those who missed it!

McGregor Backs Up the Talk

After months and months of anticipation, dozens of hours' worth of sound bites, and more than 15 press square-offs, Jose Aldo and Conor McGregor finally settled their score, unifying the UFC featherweight title in the process.

McGregor backed up his talk in the biggest way possible, removing Aldo's batteries with one of the first punches of the fight. 13 seconds into the encounter, John McCarthy was waving off the action, while a dazed Aldo came to under the Jumbotron. It was the fastest stoppage ever in a UFC title fight—beating out Ronda Rousey's lighting fast tap of Cat Zingano. There's really not much more to say about it.

With the one-punch win, the new featherweight king stands at 19-2 overall, with 17 knockouts in that stretch. Aldo, on the other hand, experiences his first loss in over a decade, and now sits at 25-2 overall. That said, his years of dominance may imply an immediate rematch. If that's the case, Frankie Edgar is likely busting out the tissues.

UFC 194's co-headlining honors were held by a middleweight title clash; one that was viewed by many as the pinnacle of modern MMA competition. In one corner, we had undefeated champion Chris Weidman, fresh off a third successful defense of his title. In the other, we had former Strikeforce champion Luke Rockhold, who entered the bout on the strength of four-straight stoppage wins.

In the end, it turned out to be quite a beat down. Though Weidman had his moments in rounds one and two, he paid dearly for a failed, third-round wheel kick, finding himself on his back under a meteor shower of ground-and-pound as the round wore down. And though he survived into the fourth, it was then only a matter of time before Rockhold sealed the deal with upward of 20 punches against the cage.

In victory, the dynamic AKA staple assumes the middleweight throne with a 15-2 overall record, and a 5-1 record inside the Octagon. Weidman, meanwhile, loses for the first time as a professional. Now 13-1 overall and 9-1 in the UFC, it'll be interesting to see how the talented New Yorker swallows this first spoonful of defeat.

The middle bout of the main card came courtesy of the middleweight division as former Strikeforce champion Ronaldo "Jacare" Souza and Olympic wrestler Yoel Romero collided for a shot at the middleweight title. It was an interesting fight.

Round one was decidedly Romero's, who dropped Jacare with a with a spinning back fist, and rattled him with a barrage of follow up ground strikes. Round two was much closer, as neither fighter landed much, and the only takedown of the round was corrected by the referee after a clear Romero fence grab. Round three, finally, belonged to Jacare, who turned things on with a series of punches against the fence, and a late takedown.

In the end, the judges sided with Romero, who was awarded a split decision victory. Though his second-round fence grab rendered the verdict somewhat controversial, the 38-year-old is now 11-1 overall, and has probably earned himself a shot at middleweight gold.

Jacare, meanwhile, falls to 22-4 overall, losing for the first time in 6 UFC bouts. That said, he's unlikely to lose much ground, given the competitive nature of this defeat.

For grappling enthusiasts, a clash between former middleweight title challenger Demian Maia, and Icelandic submission specialist Gunnar Nelson long stood out as the welterweight division's holy grail. At UFC 194, those grappling fans got their wish, as the two BJJ whizzes walked onto the canvas together with a whopping 10 submission wins apiece.

Though the fight did unfurl almost entirely on the mat, it was far from a competitive affair.

Over the course of three-round affair, Maia amassed an impressive 10:55 of control time, threatened with 2 tight submissions, and landed a whopping 218 total strikes, completely outclassing Nelson in the process. Needless to say, he'd done more than enough to earn the judges' favor by the time the final bell chimed.

The first bout of the main card saw Hawaiian featherweight Max Holloway look to extend his win-streak to eight. His opportunity to do so came against brick-fisted former lightweight Jeremy Stephens, who entered the bout with a blistering knockout of Dennis Bermudez in his wake.

Over the course of three exciting rounds, it was Holloway who came out on top, having landed the fight's more meaningful strikes, and impressed the judges with a third-round takedown. Now 14-3 overall, he's riding an eight-fight streak, and resides amongst the world's very best featherweights. And while his post-fight call for a title fight in Hawaii remains a little premature, it seems like a matter of time before he challenges.

In defeat, Stephens falls to 24-12 overall. And though he remains one of the game's most dangerous featherweights, he's now a tough 1-3 in his last 4. The 29-year-old will need to make his next fight count.

The undercard was capped off by a main-card-worthy bantamweight scrap between long-time contender Urijah Faber, and the surging Frankie Saenz. Faber looked to rebound from a May loss to Frankie Edgar, while Saenz looked to make it 8 in a row.

After three, fun rounds, it was Faber who found success on his mission. Having out-landed his opponent by a 90-77 margin and succeeded on 2 takedowns, he'd more than earned the decision. And though he did look slower than usual, the win keeps him afloat as one of the game's very best bantamweights. He's now 33-8 overall.

Saenz, meanwhile, loses for the first time since May 2012. He'll return to Arizona with a 11-3 overall record.

The lone women's bout of the night came courtesy of the strawweight division, as Jocelyn Jones-Lybarger replaced Michelle Waterson on short notice against Tecia Torres. Unfortunately for Jones-Lybarger, the gamble didn't pay off.

The busier woman through three rounds, Torres was awarded a just unanimous decision win for her efforts. With the win, she moves to a perfect 7-0, and a 3-0 across three UFC bouts. Jones-Lybarger, meanwhile, experiences her first loss since July 2013. She's now 6-2 overall.

Alves Taps Covington in One

After reversing a takedown in the bout's opening minutes, the dangerous Brazilian locked up a guillotine choke, and coaxed the tap at the 1:26 mark. The win, which marks his 6th submission triumph, moves him to a perfect 10-0. Covington, in contrast, will leave Las Vegas with his first loss. He's now 8-1 overall.

In advance of his UFC 194 undercard bout with Leonardo Santos, much was made of the promise of "The Motown Phenom," Kevin Lee. Things did not go his way in Vegas, however.

Just 3:26 into round one, the 23-year-old prospect found himself on the wrong end of an out-of-nowhere TKO. The victorious Santos, who celebrated by jumping the cage and sprinting out of the arena, now stands at 15-3 overall. Lee, meanwhile, loses for just the second time. He now owns an 11-2 overall record.

The Fight Pass prelims were wrapped up by a lightweight clash between Bay Stater Joe Proctor and Dagestan's Magomed Mustafaev.

It was a dominant showing for the Russian export, who stopped his opponent with a series of knees and elbows against the cage in the opening moments of the first round. The win, which is his first on North American soil, moves him to 13-2 overall. Proctor, meanwhile, falls to 11-4.

The second bout of the evening paired dangerous lightweight finishers. In one corner we had Tristar striking whiz John Makdessi. In the other, we had Hawaii's Yancy Medeiros. Both looked to rebound from recent TKO losses, to Donald Cerrone and Dustin Poirier respectively.

In the end, it was Medeiros who was successful in this regard, prevailing with a debatable split decision. In victory, he moves to 12-3. Makdessi, meanwhile, falls to 13-5 with the loss, and enters his first 2-fight skid since 2012.

UFC 194 began in the welterweight division, as TUF 11 winner Court McGee returned to action for the first time in two years against young Brazilian Marcio Alexandre.

After three rounds of action, the judges sided with McGee, who was far busier on the feet, and more successful in the fight's grappling exchanges. With his successful comeback in the books, he's now 17-4 overall. Alexandre, meanwhile, finds himself on a three-fight skid, and now owns an 11-3 overall record.