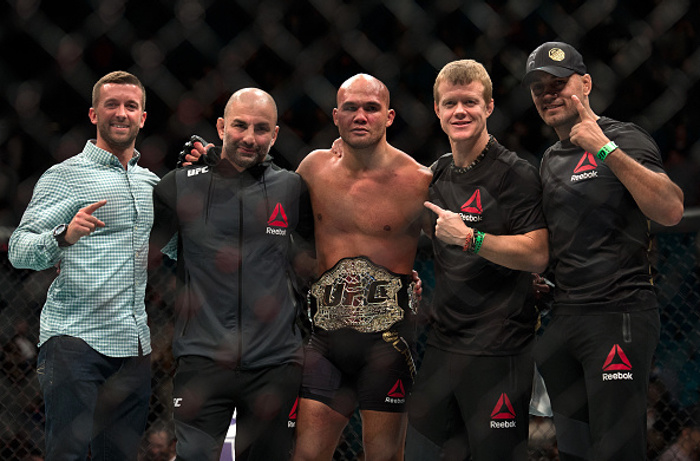 The UFC kicked off 2016 with UFC 195, a card that was once expected to be headlined by a now-famous Holly Holm versus Ronda Rousey women’s bantamweight title fight. The event, which marked the UFC’s fourth return to Las Vegas in less than a month, was instead headlined by an unforgettable welterweight title fight between Robbie Lawler and Carlos Condit. Elsewhere on the lineup, viewers were treated to action in six of the UFC’s ten divisions, and appearances by resurgent veterans, long-absent contenders, and compelling prospects alike.

When all was said and done, the UFC’s first steps into this new year were undeniably successful. Highlighted by some fantastic finishes, a handful of razor-thin decisions, and plenty of surprises, UFC 195 will not soon be forgotten. Here’s a recap of the action for those who missed it! 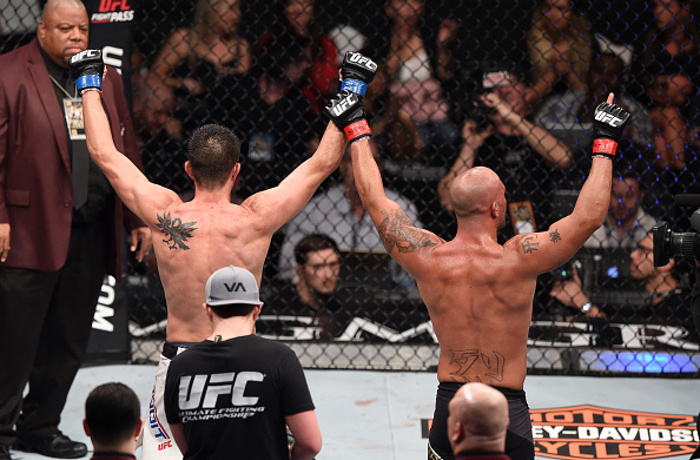 Sometimes, highly-anticipated matchups fall short—case in point: Carlos Condit vs. Nick Diaz. Other times, they deliver in ways greater than we could possibly fathom. This was the case when Robbie Lawler and Carlos Condit collided in UFC 195’s main event. For five wild rounds, the two welterweights swapped heavy artillery in a truly unforgettable fight.

For most of the bout, Condit’s strategy depended on volume and diversity, as he ripped into the champion with a barrage of nearly 200 significant strikes, including kicks, elbows, knees and punches—even the kitchen sink. Lawler, meanwhile, chose a more measured approach, loading up—and landing—the kinds of punches that could knock a planet out of orbit. Then, in the fifth, all hell broke lose, as the two gritty veterans threw caution and strategy to the wind in a round that will go down in MMA history.

In the end, Lawler retained his title with a split decision that is likely to be debated for months to come. Now 2-0 as the UFC welterweight champion, he’s a fantastic 8-1 since returning to the organization and 27-10 overall. Condit, meanwhile, returns to the loss column after a May smashing of Thiago Alves, and now sits at 30-9 in total.  That said, the intensity and competitiveness of his fight with Lawler all but guarantees him a rematch. Sorry, Tyron Woodley. 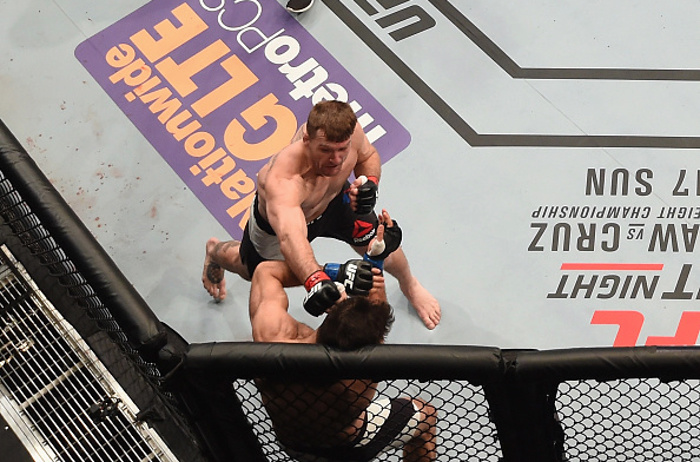 Andrei Arlovski’s late-career resurgence has been a thing to behold. After a career flat-lining in 2011, the Belarusian heavyweight managed a return to relevance that nobody could have predicted. Unfortunately, that return to relevance would eventually lead him to Croatian-American destroyer, Stipe Miocic.

Just 54 seconds into the bout’s opening frame, Miocic planted a meteor on Arlovski’s ear, and a few follow-up punches later, was screaming to Dana White for a title shot. And while Alistair Overeem might have something to say about that, Miocic is now 5-1 in his last 6, and 14-2 overall—hard numbers to argue with.

The knockout loss marks Arlovski’s first taste of defeat since March of 2013, when he lost a decision to a bulked-up Anthony Johnson. He’s now 4-1 since rejoining the UFC in 2014, and 25-11 over the course of a 15-year career. 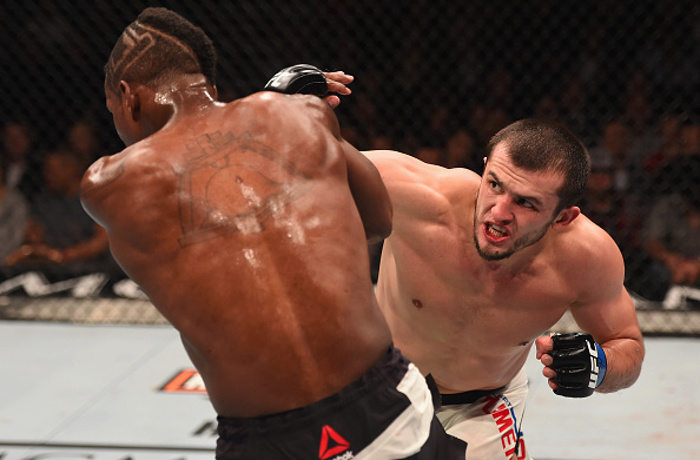 In advance of UFC 195, Joe Rogan referred to Albert Tumenov and Lorenz Larkin’s main card showdown as the evening’s “sleeper fight.” And though we were deprived of finish, the venomous striking of the two welterweights certainly rendered their collision a tense one.

For three rounds, the two fighters stalked each other, with Tumenov landing the better punches, Larkin painting his opponent’s lead leg purple with thudding kicks, and an abrupt win for either man seeming just seconds away throughout. In the end, however, Tumenov’s boxing and forward motion proved enough to earn the judges’ favor.

With the win, Tumenov extends his win-streak to 5 and moves to 17-2 overall. Undoubtedly ready for a ranked foe, it’ll be interesting to see who he’s paired with next. Larkin, meanwhile, loses for the first time since dropping to welterweight.  He’s now 3-5 in the UFC and 16-5 overall. 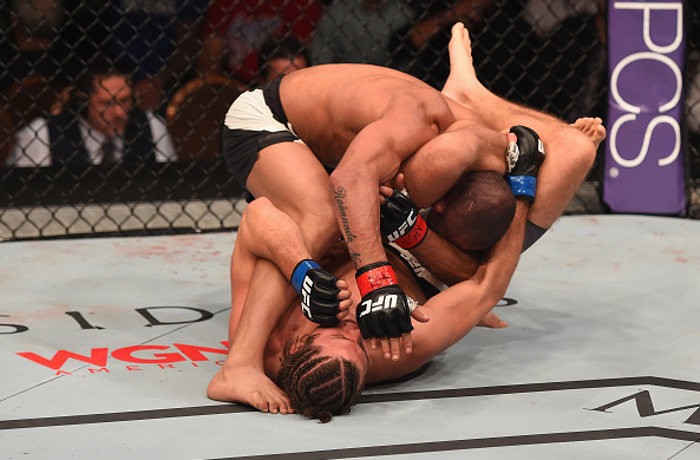 UFC 195’s second main card bout occurred in the featherweight division, as The Ultimate Fighter 14 winner Diego Brandao collided with undefeated 24-year-old Brian Ortega. As many expected, it was a fun one.

Rounds one and two of this fight seemed to belong to Brandao, who was more effective on the feet and stayed out of trouble for the brief moments that the fight hit the mat. In the third, however, Ortega stole the victory with a spectacular triangle choke, keeping the zero on his record in the process.

Now 10-0 as a pro and 2-0 in the UFC, Ortega stands out as one of the featherweight division’s most intriguing young fighters. Brandao, meanwhile, has a two-fight win-streak snapped by the loss. He’s now 20-11 overall and 6-4 since his time on TUF. 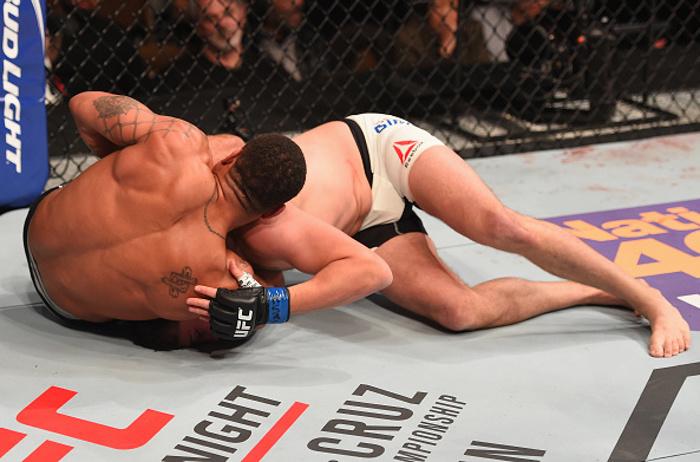 Trujillo Taps Sims in the First

The main card was kicked off by a nice bit of lightweight matchmaking as the dangerous, if inconsistent Abel Trujillo collided with the brick-fisted Tony Sims. Trujillo looked to rebound from a pair of submission losses to Tony Ferguson and Gleison Tibau. Sims, meanwhile, sought to separate himself from a decision loss to the rising Olivier Aubin-Mercier.

In the end, it was Trujillo who was able to return to the win column—though not with the punching power for which he’s known. After a sloppy Sims takedown, the Blackzilians rep was able to scramble into position to lock in a tight guillotine choke. The tap came at the 3:18 mark of round one.

The submission win, which is Trujillo’s first in the UFC, moves him to 4-3 in the organization and 13-7 overall. Sims, meanwhile, now sits at 12-4 in total and owns a 1-2 overall record.

The final bout of the prelims saw onetime bantamweight title challenger Michael McDonald return to action after more than two years on the shelf. He did so against Japanese veteran Masanori Kanehara, a fighter who has defeated legends like Norifumi “Kid” Yamamoto and “The Korean Zombie” Chan Sung Jung in the past.

For the majority of the fight, it looked like ring rust would be a real factor for McDonald, who spent most of round one on his back. In the second round, however, the American slipped out of a choke to slap on a rear-naked choke of his own. The tap came at the 2:09 mark of the second.

Initially, Australia’s Kyle Noke was expected to mix it up with Kelvin Gastelum at UFC 195. Instead, he found himself on the canvas with the 25-year-old Alex Morono, who replaced an injured Gastelum on just 11 days’ notice.

Though he took a bit of a beating in the process, Morono was able to take full advantage of his opportunity, claiming a split decision win after three back-and-forth rounds. With the win, he now sits at a strong 12-3 overall, and having made a successful debut, proves he certainly belongs in the UFC.

Noke, in contrast, has a two fight win-streak snapped by the loss. He’s now 6-4 in the UFC and 22-8-1 over the course of his long career.

The lone women’s bout of the evening saw Russian-American striker Justine Kish make her UFC debut after being forced out of The Ultimate Fighter 20 with a knee injury. Her opponent was gritty American Top Team strawweight Nina Ansaroff.

Though Kish was actually out-struck by a 106-85 margin over the course of the encounter, her pair of successful takedowns and constant pressure would eventually earn her a debatable unanimous decision win. With the victory, the former kickboxer stays perfect with a 5-0 overall record.

In defeat, Ansaroff falls to a tough 6-5 overall. And though she’s now 0-2 in the UFC, the questionable nature of this loss mean she’s likely to be given another shot.

In the first bout of the televised prelims, 32-year-old prospect Scott “Hot Sauce” Holtzman looked to keep his perfect record intact against Drew Dober. Unfortunately for Holtzman, Dober had other plans.

Over the course of their three-round encounter, Dober battered his foe on the feet, and despite the grappling accolades of his opponent, scored 4 of the bout’s 5 takedowns. Needless to say, he’d done more than enough to earn the judges’ favor by the time the fight had ended.

The hard-fought win is Dober’s first since submitting Jamie Varner over two years ago, and just his second in five UFC appearances. He’s now 16-7 overall. Holtzman, meanwhile, is now 8-1 as a pro and 1-1 in his first two UFC bouts.

Originally scheduled to mix it up in the main event of October’s UFC Fight Night 76, Dustin Poirier and Joe Duffy instead found themselves atop UFC 195’s Fight Pass Prelims. In the end, however, their pairing was well worth the wait.

Round one of this showdown was tough to call, as the two lightweights painted each other red with punches from all angles. Round two was much easier to score, as a bloodied Poirier grounded the fight and punished his Irish foe with a monsoon of ground strikes. Round three, finally, saw Poirier ground the fight again, only to be threatened with a tight triangle choke as the seconds melted off the clock.

In the end, the judges awarded the 26-year-old American a unanimous decision, moving him to 3-0 as a lightweight and 19-4 overall—all just days removed from his five-year anniversary with the UFC. Duffy, meanwhile, falls to 14-2 overall, and 2-1 on the sport’s biggest stage. That said, the heart he showed against Poirier means he’s unlikely to lose much ground in defeat. Being the last man to defeat Conor McGregor doesn’t hurt either.

At UFC 195, Joe Soto looked to rebound from back-to-back knockout losses to TJ Dillashaw and Anthony Birchak.  His opportunity to do so came against Japanese prospect Michinori Tanaka, who has sharpened his tools at Urijah Faber’s Team Alpha Male and Kid Yamamoto’s Krazy Bee.

Over the course of the fight, Tanaka was able to score a trio of takedowns, but in turn, found himself on the wrong end of four submission attempts and 74 significant strikes. In the end, however, the aforementioned takedowns paid dividends for the Japanese fighter, who was awarded a split decision that’s sure to be debated over the coming days.

Now 2-1 in the UFC, the 25-year-old Tanaka will return to Japan with an 11-1 overall record. Soto, on the other hand, remains winless in three UFC bouts and now owns a 15-5 overall record.

Westcott Blitzes Garcia in One

The action began in the welterweight division, as Edgar Garcia mixed it up with Canada’s Sheldon Westcott in the first UFC bout of 2016. Both men looked to rebound from losses in their last outings, and in the end, it was Westcott who was able to do so.

Sealing the deal with an onslaught of first-round ground and pound, Westcott will return to Alberta with a 9-3-1 overall record and his first win in three UFC appearances.  Garcia, on the other hand, will return to Arizona with a 14-5 record and a headache.