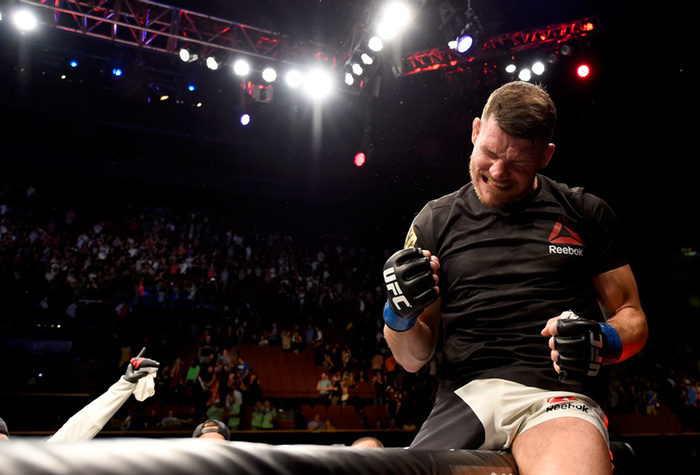 The UFC kicked off the month of June with UFC 199, a stacked card emanating from The Forum in sun-soaked Inglewood, California.

Headlined by a last-minute rematch between UFC middleweight champion Luke Rockhold and The Ultimate Fighter 3 winner Michael Bisping, and co-headlined by a bantamweight title rematch between champ Dominick Cruz and challenger Urijah Faber, the 13-fight card was crammed to capacity with unforgettable moments.

There were wild stoppages and back-and-forth brawls. There were several chilling tributes to late legend Muhammad Ali. There was the announcement of Conor McGregor vs. Nate Diaz 2. There was the announcement that former heavyweight champ and WWE superstar Brock Lesnar would be returning to the Octagon at UFC 200. And finally, there was Michael Bisping's shocking middleweight title win. Yes, UFC 199 was one for the history books.

Here's a recap of the action for those who missed it! 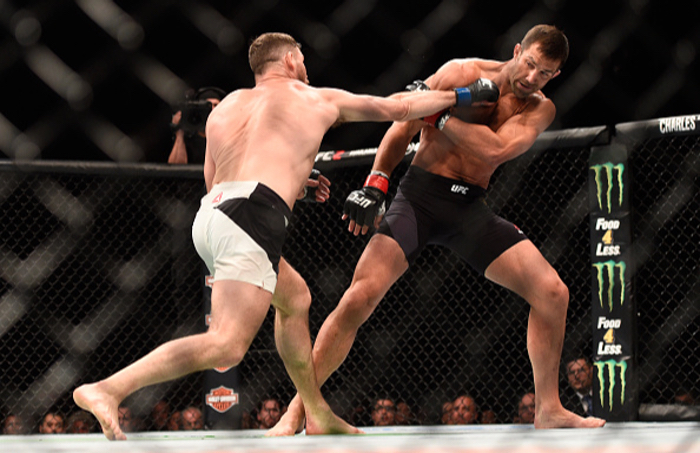 Though it was the result of a last-minute Chris Weidman injury, the main event of UFC 199 saw Michael Bisping earn the UFC title shot he's been chasing since he won the Ultimate Fighter way back in 2006. His opportunity came against Strikeforce alum and reigning champ Luke Rockhold—a man he lost decisively to only a year and a half ago.

Contrary too all odds, opinions and expectations, Bisping fulfilled what he's long believed to be his destiny and won himself a UFC title. Tagging an over-confident Rockhold in the first frame, the Brit then chased his foe down like a hungry dog, and sealed the deal with a trio of follow-up punches against the cage. Rockhold came to in a heap, and moments later, the belt was being wrapped around Bisping's waist. Yes, after a decade-long run of highs and lows in the Octagon, Michael Bisping is finally the middleweight champ.

With the win, the 37-year-old sits at 29-7 overall, and will go down as the first British champ in UFC history. Rockhold, meanwhile, will have to do some soul-searching, as this loss quite clearly came down to his overconfidence. He's now 15-3 in sum, and 5-2 in the Octagon.

The evening's co-main event saw bantamweight champion Dominick Cruz—fresh off a comeback for the ages—defend his belt against an old foe in Urijah Faber. Prior to the contest, the pair were 1-1 across two bouts.

While the first fight was a blitzkrieg for Faber, and the second was a close win for Cruz, the third was a blowout for Cruz. For five rounds, the champion relied on his ghostlike movement to stay out of harm's way and batter Faber with punches from all corners of the cage. Despite being able to rock Faber on several occasions, however, Cruz ultimately failed to put his foe away, settling instead for a dominant unanimous decision win.

With the win, Cruz extends his streak to 13. With a fantastic overall record of 22-1-0, he now looks ahead to scraps with the likes of Demetrious "Mighty Mouse" Johnson, TJ Dillashaw, Bryan Caraway and Cody Garbrandt. Faber, meanwhile, comes up short in his fourth UFC title fight. Now 33-9 overall, the pioneer hinted at the possibility of retirement post-fight, but assured commentator Joe Rogan that he'd need more time to think about it.

The middle fight of UFC 199's main card saw 24-year-old Hawaiian featherweight Max Holloway attempt to extend his win-streak to a ridiculous nine. His opportunity to do so came against long-time contender Ricardo Lamas, who was fresh of a domination of Diego Sanchez.

It was another marquee win for the young Hawaiian, who relied on his superior striking to sprint to a unanimous decision win—but not before pointing to the ground in the final seconds, and challenging Lamas to a wild slugfest to close out the fight.

With this extremely entertaining win, Holloway's win-streak now stands at a division-best 9. He's now 16-3 overall and appears to be the obvious man to fight the winner of the McGregor-Aldo-Edgar featherweight clusterfuck. In defeat, Lamas falls to 16-5 and 7-3 in the UFC. Despite this loss, however, he remains a clear-cut member of the featherweight elite.

At UFC 199, 45-year-old former Olympian Dan Henderson made what many thought could be his final walk to the Octagon. His opponent was the wickedly powerful Hector Lombard, another Olympian, who sought a fresh start back in the middleweight division after several years at welterweight. At a glance, it looked like it cold be a bad night for the aging Hendo.

Instead, the aging legend weathered an early storm to deliver one of the most ridiculous knockout wins of his knockout-filled career. After catching his foe with a head kick, the veteran let loose a strange, but effective back elbow to the temple that knocked Lombard out cold. A pair of follow-up ground strikes later, and Hendo was being peeled off his foe by the referee.

After the incredible win, Henderson carefully suggested that, while he's not certain what the future holds, this fight with Lombard may have been his last. If this turns out to be the case, the legend can take pride in his career ending on a serious high note, as he walked out of the Octagon, 32-14 overall, to the roar of the Californian crowd.

Lombard, meanwhile, experiences his second consecutive stoppage loss. He's now 34-6-1 overall, and at 38, appears to be nearing the end of the road himself.

In the first fight of UFC 199's main card, Bobby Green walked into the Octagon for the first time since November 2014. The man on the other side of the canvas was Louisiana's Dustin Poirier, who recently gave his career new life by returning to the lightweight division.

This one was all Poirier. Showcasing not just his ever-improving hands, but also a veteran composure and patience, Poirier caught his opponent mid-taunt, and from there, slowly picked him apart until the knockout materialized.

With this first-round knockout win, Poirier is 4-0 since returning to lightweight. Three of those wins have come by way of knockout. Now an awesome 20-4 overall, his post-fight call for "big fights" is going to be hard to ignore. Green, meanwhile, is winless since a July 2014 split triumph over Josh Thomson. The Strikeforce alum is now 23-7 overall and 4-2 in the UFC.

After a tribute to late boxing legend and humanitarian Muhammad Ali, and a spine-tingling "Ali" chant from the California crowd, the UFC 199 prelims wrapped up with an interesting featherweight bout. In one corner, we had the veteran Clay Guida. In the other, we had up-and-coming BJJ whiz Brian "T-City" Ortega.

For two-and-a-half rounds, it looked like Ortega might lose his undefeated record to his far more experienced foe. Then, the Californian fired off a laser-guided knee, which sent Guida tumbling to the canvas in a daze.

With the KO win, Ortega keeps his perfect record in tact. Now 11-0 overall and 3-1 with one no contest in the UFC, his entrance into the featherweight top-10 seems to be a matter of time. Guida, in contrast, will now have to recover from just the second knockout loss of his 48-fight career. He's now 32-17 overall, and despite the clear improvements he's made training at Team Alpha Male, seems to be nearing the end of his career.

Dariush Sleeps Vick in the First

James Vick was beginning to look like one of those fighters that the world should stop picking against. Every time we expected him to be tested, he'd blow through that test with relative ease. Then, at UFC 199, Vick ran into a crazed Beneil Dariush, who was apparently eager to put a recent loss to Michael Chiesa in the rear-view.

From the moment the fight began, Dariush began to land left hands straight out of an episode of Dragon Ball Z. And when Vick was hurt, he didn't let up. The Assyrian-American's surprising knockout win came at the 4:16 mark of round one.

With the victory, Dariush returns to the win column and assumes an overall record of 13-2. His UFC record, meanwhile, sits at 7-2. The defeat, which is the first of Vick's career, moves him to 9-1 overall and 5-1 in the Octagon.

Last June, Jessica Penne had her face rearranged by UFC strawweight champ Joanna Jedrzejczyk. Almost a year later, the talented strawweight finally made her Octagon return. She did so against Jessica Andrade, who was debuting at strawweight after many years in the bantamweight division.

Unfortunately, Penne once again wound up on the wrong end of a fairly heinous beating. Taking a page out of Wanderlei Silva's book, Andrade poured it on from the opening bell, smashing her opponent against the cage en route to a second-round TKO.

With this massive win, Andrade immediately establishes herself as a strawweight contender and at just 24 years old, has plenty of time to work her way up the ladder. She's now 14-5 overall and 5-3 in the UFC. Penne, meanwhile, is now on the first two-fight losing streak of her career. She's 12-4 in total and 1-2 since joining the UFC in late 2014.

If people were disappointed by this late bout-change, Caceres didn't seem to notice. The TUF 12 veteran battered his foe through rounds one and two and squirreled his way out of a tight arm bar in round three en route to a dominant unanimous decision win—arguably the finest win of his career thus far.

With this fantastic win, Caceres enters onto a two-fight win-streak. He's now 12-8 overall, and appears to be finding his groove as a UFC featherweight. Miller, in contrast, remains winless since he tapped Sam Sicilia in January of 2013. The gritty veteran is now 21-10 overall and 3-5 with one no contest since returning to featherweight.

Sean Strickland and Tom Breese have long stood out as two of the hottest prospects at 170 lbs, and at UFC 199, they collided. The stakes? Another big step up the welterweight ladder.

The fight, which was contested almost entirely on the feet, was the sort that makes you glad not to be a judge. In the end however, Strickland's superior output, which saw him outland his foe by a 74-39 margin, proved enough to sway the judges.

With the split decision win, Strickland moves to an applause-worthy 18-1 overall, and 3-1 since dropping to welterweight. Breese, on the other hand, will return to the UK weighed down by his first professional loss. He's now 10-1 in sum, and 3-1 in the Octagon.

One "O" had to go, and in Inglewood, it was Wilson's. Despite nearly being finished in the middle of the second round, Da Silva was able to rally for a gutsy, second-round TKO victory.

With the win, the Brazilian makes a successful UFC debut and moves to 11-0 overall. All 11 of his wins have come by way of knockout. Wilson, on the other hand, receives his first career loss in front of a home-state crowd. He'll leave the Forum with a 7-1 overall record and 1-1 UFC record.

Despite the tragic passing of his father-in-law Muhammed Ali, hot-and-cold middleweight Kevin Casey appeared as planned on the UFC 199 undercard, taking on Bosnian-American Elvis Mutapcic.

It was a bit of a difficult fight to score, as Casey's grappling seemed to earn him the first half of the fight, and Mutapcic rallied in the latter half. In the end, the close nature of this bout manifested itself in a majority draw.

The action began in the lightweight division as the UFC's lesser-known Dong Hyun Kim took on Mexico's Polo "El Toro" Reyes. Though not much is typically expected of a card's opening fight, this one delivered with downright bedlam.

For more than two and a half rounds, Kim and Reyes pummeled each other with nearly 250 combined strikes, each nearly finishing the other on multiple occasions. In the end, however, it was Reyes who was able to rally, flattening his foe for a stoppage win late in the third round.

The knockout win moves Reyes to 6-2 overall and 2-0 in the UFC—with both his Octagon wins coming via knockout. Kim, meanwhile, falls to 13-8-2, and a tough 0-2 mark in the Octagon.