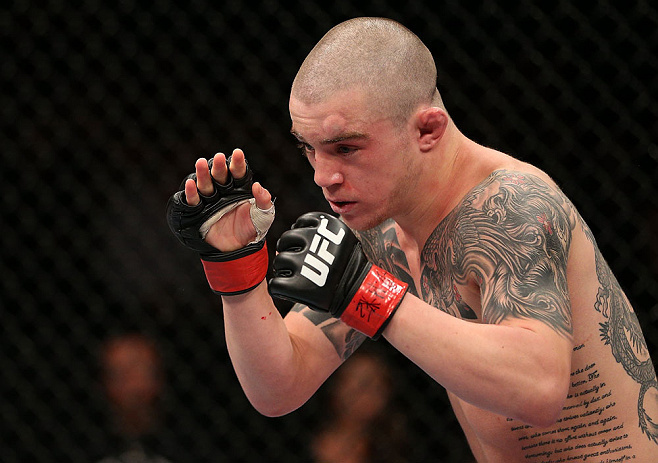 On January 2, UFC featherweight and Ultimate Fighter alumni Andy Ogle announced on Twitter that one of his New Year's resolutions for 2013 would be reading a book a week for the entire year. Since then the 23-year-old from the small coastal town of Tynemouth in the far north of England has made his way through four novels -- the perfect distraction, he says, from the endless training he's doing for his Feb. 16 fight in London against American jiu-jitsu ace Josh Grispi. That fight will be Ogle's second inside the Octagon. The first, a split-decision loss to Akira Corassani, left the Brit with a large hemotoma on his head, a lot of doctor-mandated time on his hands, and the realization that he'd better find a hobby outside the cage. Fightland caught up with Ogle at Kaobon, his gym in Liverpool, to talk about how the project is going so far.

Fightland: How did you decide on this New Year's resolution?
Andy Ogle: Basically I decided to do it because I have a lot of time in between training sessions, and I find television is just so boring; it’s just constant drivel on every television channel: constant rubbish and garbage. So I decided to read a book a week of must-read books.

Is there a predetermined list? Are the weeks all planned out?
No, I usually just go on different lists and people's recommendations. Also movies that I thought were quite good and I knew that the book would be better. So I started with The Count of Monte Cristo. I really liked the movie with Guy Pearce. I thought the book would be 10 times better, and it didn’t disappoint. It was so much better. More details, more color it has. Also, it lets people create a relationship with the characters and also create their own images in their own head. It lets them create the movie.

So are you on the third book now?
I’ve developed a little bit faster than I thought I would because I read Slaughterhouse Five. I read that. And it was only 157 pages long, and I read it over two days. So I read that as well as The Lord of the Rings: The Fellowship of the Ring. So I ended up getting two books done in one week.

What did you think of Slaughterhouse Five?
It was all right. It was good. I enjoyed it. But I thought the author put the phrase “So it goes” into the book too many times, far too many times. It’s, like, repeated 106 times in 157 pages. Instead of saying other words like “Sure it has been said” or “To my knowledge “ or “As I believe” or whatever. He could have said so many different things but he kept on repeating that? So it was like, “Oh my god, Jesus Christ! This is really annoying me!” I had to get used to the writing style, and it also shifts in time quite a lot from the present to the past to the future because the main character believes he’s in time travel.

Did you connect emotionally with the lead character?
At times in the book I felt sorry for him ‘cause he seemed alone, in a way. He was a very strange character.

What about The Fellowship of the Ring?
It’s a good read. It’s an easy read. From reading The Count of Monte Cristo to reading that, it was very much … it allowed me to wind my brain down a little bit more. When I was reading The Count of Monte Cristo, I had to look up a few words. It’s very descriptive with people’s clothing and very descriptive with people’s faces. Because it’s France and stuff. It’s a little bit dated, the story as well, and it took me a while to get into it. But my girlfriend is also reading Les Misérables, and I'm intending to read that next after The Two Towers and The Return of the King, and that’s very much the same kind of writing. The Lord of the Rings and all them books tend to create an image through setting out the scene of the land around them, and these books, these novels, they usually set out the description of the character and the clothes.

Are there guidelines for what books you'll read? Do they have to be fiction?
No, no guidelines. Whatever takes my fancy. I was wantitng to read something about Hitler because I pretty much don’t know about that time, and I feel as if it was pretty significant for my country. I feel a little bit ashamed that I don’t know anything about it. So I was going to read a book about the rise and fall of Hitler and what he was trying to achieve.

What do other fighters think about this?
They all basically have different ways of getting away from training. Some of them use women (laughs). Some of them try to pursue women and chat up females. Some of them play xBox and PlayStation. PlayStation isn’t for me. I kind of feel a bit lost with it. It’s going to sound cheesy, but there are no transferable skills. If you do six hours of PlayStation you’ll come away and say, “Well, that was good, but I just wasted six hours of my life.” Where when I’m reading I feel like it kind of helps my memory. Also it sparks off more creativity. It helps me relax. And I think it helps me with my vocabulary. When I’m reading novels it’s very rare that I don’t pick up a book to find out what a word means. Just a word every once in a while. But it’s better than sitting there on the PlayStation and not doing nothing.

Does all this reading help with your training?
It keeps my mind off of things. Training is training and you’ve gotta be there in the moment. But you don’t want to overcook something. You don’t want to keep on thinking about something the whole day, everyday. And that’s what I used to do. I used to play on my phone, go on Facebook, go for a walk, eat food, have a nap or whatever, and watch a little bit of television, but training was always on my mind. I can do my hours in the gym, but afterwards you’ve got to let yourself go. My girlfriend said after the Akira Corassani fight, I had a week off, and she went, “What else are you going to do? You can’t go back to training; you've got this hematoma on your head. What are you going to do?” I said, "I've got nothing else to do.” She said, “When it’s just you and me and you’ve got an injury and you’re home for a long time, we’re gonna be ruined. We’re gonna be screwed. Because you can’t do nothin’. You don’t have no other interests. Only mixed martial arts.” “I know. It’s my job.” “Yeah, but nobody just works. We all have a little form of fun and a little form of play.” So now i just sit and read.

So, are you focusing on training jiu-itsu for your fight with Josh Grispi?
Nah, I’m focusing on everything. I won’t go to war with no tool unsharpened.